It was only yesterday that we posted about the petition to “Let Bert & Ernie Get Married On Sesame Street” that has gone semi-viral around the world. In fact, the momentum of the campaign has been strong enough to give Sesame Street reps the impetus to set the record straight (LOL).

Below is the official statement in which the Sesame Workshop explains the true nature of the Bert-Ernie relationship:

“Bert and Ernie are best friends. They were created to teach preschoolers that people can be good friends with those who are very different from themselves. Even though they are identified as male characters and possess many human traits and characteristics, they remain puppets, and do not have a sexual orientation.”

There you have it. So even though Bert and Ernie might not be gay their relationship does stand for the same general principle of the petition: love and acceptance.

Sesame Street so brilliantly teaches kids about how to be good people and count, and maybe it’s not necessary to bring sexuality to the table. Mostly because Muppets don’t have genitals. And hell if you really wanted go there, one could make a decent argument for the possibility that Miss Piggy is a drag queen: the wig; the insistence on dressing like Marilyn Monroe; the voice that sounds exactly like a man does when imitating his wife or mother…

And besides, it’s kind of paranoid and judgmental to assume that because Bert and Ernie live together they have to be gay. We can all learn a valuable lesson from Wayne’s World character Russell who once said: “…And I love you. Because I’ve learned that platonic love can exist between two grown men.” 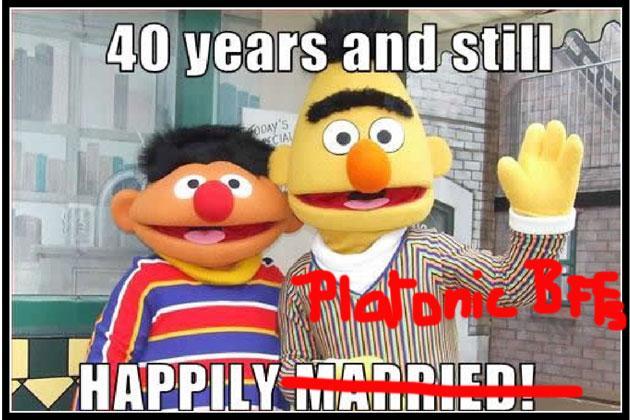