Scott Morrison has lashed out at critics who commented on photos of him exuberantly celebrating Easter at his church in the Sutherland Shire, calling them “grubs” and “keyboard warriors”, and accusing them of comparing his arm gestures while singing with a Nazi salute.

Speaking outside a Buddhist temple in Victoria while doing the election rounds, ScoMo responded to critics of the photos.

“There was another one, another group, who was likening my praise in my own church on the weekend to some sort of Hitler salute,” he said.

So, a bit of context for those who aren’t across the photos.

It’s absolutely no secret that Scott Morrison is a Christian. Nor is it any surprise – most of Australia’s prime ministers have been Christians of some flavour, either in upbringing or practice: from the passionate Catholicism of Tony Abbott to the almost-agnosticism of someone like Gough Whitlam.

ScoMo is an adherent of a particularly evangelical strand of Protestantism, via his attendance of Horizon Church in Sutherland (formerly known as Shirelive). Think more or less the Shire version of Hillsong, with less hit albums. In fact, Morrison is the first Pentecostal prime minister of Australia.

Many column inches have been dedicated over the years to trying to work out what exactly his happy-clappy Pentecostal background brings to his politics. It’s safe to say he doesn’t lean on it very hard these days, likely because he is trying his best to appear like a prime minister for the whole country in the lead-up to the election.

But, in a somewhat unorthodox move, Morrison let photographers into Horizon Church for Easter service yesterday, as both leaders enforced an election truce for the holy day. The results were interesting enough that the Sydney Morning Herald reports it “took some government ministers by surprise.” 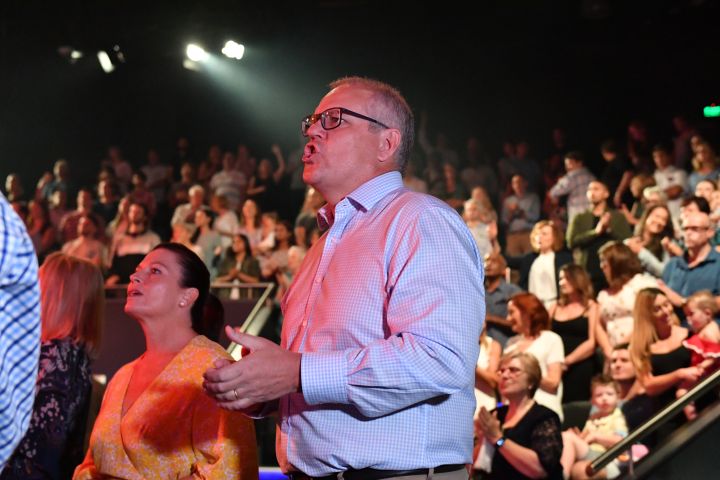 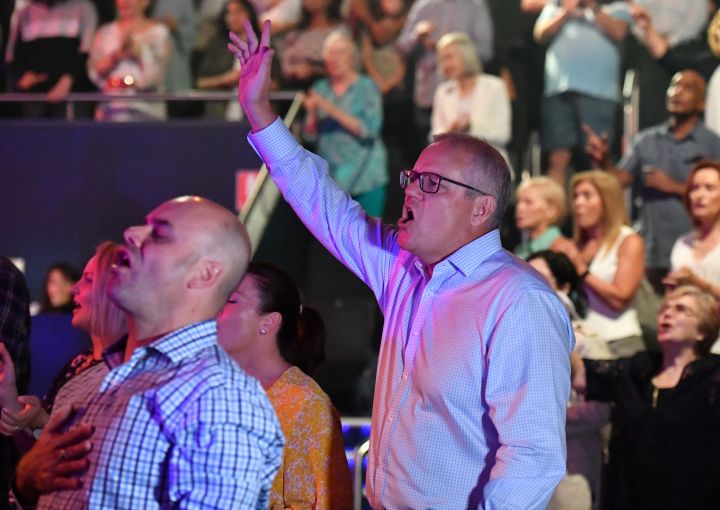 Journalists who were not photographers were not permitted inside the venue.

A survey of Facebook and Twitter shows that the prime minister is correct that there are a handful of commenters comparing his arm movements to a Nazi salute.

It’s probably less accurate to attribute these quotes to a ‘group’ – no group or organisation has made that comparison in any sort of official capacity. Earlier, the CFMMEU removed a social media post which contained one of these photos captioned “Beware of false prophets (or should that be profits?)”.

Meanwhile, Bill Shorten attended a Sunday service in Brisbane, which does not appear to have attracted quite the same degree of controversy.