Phoebe Bridgers has spoken openly about having an abortion while on tour last year. People should always be celebrated and supported for talking openly about reproductive health and Phoebe’s story comes at a really important time.

While celebs were living it up at the Met Gala, a draft from the US Supreme Court was leaked and then published in Politico. The draft opinion would overturn the US’s landmark reproductive rights case Roe v Wade. Roe v Wade essentially protects the rights of pregnant people to get abortions. When the 1973 ruling came into effect, it overturned a load of regressive state policies.

Over the last year, reproductive rights have come under threat in various states. First Texas and now Oklahoma have signed in bills which make abortions illegal after just six weeks of pregnancy. Roe v Wade being overturned would result in around half of the US’s states having abortion bans, as per the ABC.

“We hold that Roe and Casey must be overruled,” he wrote.

“It is time to heed the Constitution and return the issue of abortion to the people’s elected representatives.”

In short, shit’s really fucked. Plus it’s worryingly clear that people of colour, LGBTQ+ and poor people will most likely be disproportionately affected by a ban.

“We know that it’s going to impact those who already have barriers to health care, even before an abortion ban,” attorney and president of the US National Women’s Law Centre Fatima Goss Graves told USA Today.

“Those who live in rural areas, women of colour, those who have low income.”

Obviously, the leaked draft has led to a widespread outcry about the importance of reproductive rights.

overturning Roe v. Wade is a death sentence for actual, living people all over the country. grouping any of this systemic violence under the guise of “pro-life” is hauntingly ironic.

The overturning of Roe V Wade will mark a catastrophic shift in our fundamental rights to bodily autonomy and reproductive health care. We are constituents and we have the right and responsibility to fight this.@aclu@PPFA @AbortionFunds pic.twitter.com/zYlXSZqzCu

With Roe V Wade being overturned we are putting so many young and poor people at risk. The foster-care system will flood even more, children will die of abuse & lack of resources, others will take their own lives. I can’t imagine the fear of an unwanted pregnancy with no way out.

Congress must pass legislation that codifies Roe v. Wade as the law of the land in this country NOW. And if there aren’t 60 votes in the Senate to do it, and there are not, we must end the filibuster to pass it with 50 votes.

You can never ban abortion, you can only ban safe abortions. Read that again.

In one affecting response to the news, Phoebe Bridgers shared her experience of having an abortion.

“I had an abortion in October of last year while I was on tour,” she wrote.

“I went to Planned Parenthood where they gave me the abortion pill. It was easy.

She then linked out to an article by The Cut with a list of abortion funds to donate to. 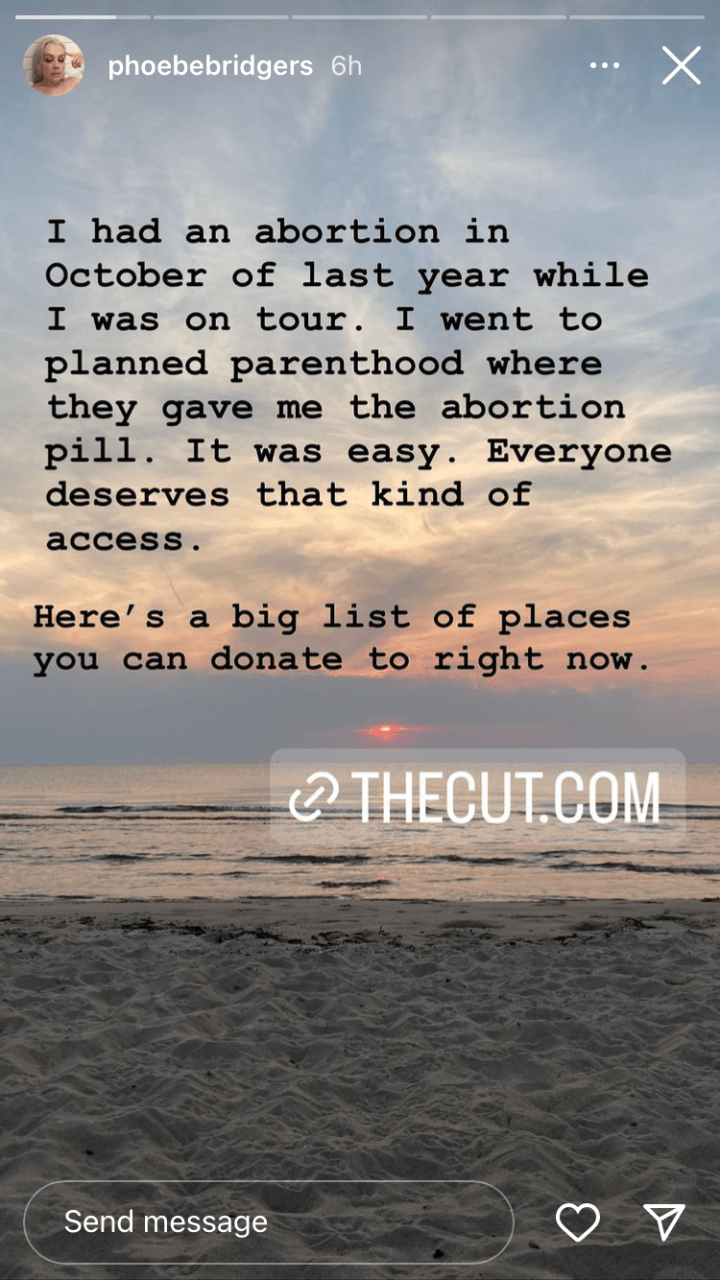 In my opinion, what is so affecting about Phoebe’s account is its simplicity. Because abortion is simple. It’s healthcare — essential healthcare, regardless of the circumstances of the pregnancy.

Bridgers’ story got a fk load of positive response online.

I saw you on tour in october in a state with a heartbeat bill that was struck down because of roe v wade. I am so glad you were able to do it so easily and safely and continue touring without worry. thank you for sharing this private thing with us all it really means so much !!

thank u to phoebe bridgers for sharing her abortion story. this kind of transparency helps pic.twitter.com/lF0fGEVhMG

When I saw her play a show last October, she announced that a portion of the proceeds would go to supporting abortion care. Definitely adds a layer of meaning to that moment.

i love phoebe bridgers so much. women speaking about their experiences with abortion so candidly does so much to destigmatize the whole issue. we won’t get anywhere until we start speaking about abortion as a standard medical procedure rather than some secret taboo offense pic.twitter.com/kvX1cgxRSz

At the end of the day, people like Bridgers sharing their stories reaffirms just how essential abortion is.