Pauline Hanson fronted media on Thursday afternoon for the first time since an explosive undercover investigation from Al Jazeera appeared to show One Nation party officials meeting with the NRA, discussing tactics, and fantasising about potential million-dollar donations.

“Good morning,” began Hanson, as she started off a 2pm press conference that would see the One Nation leader accuse the media of malpractice, call “the Al Jazeera” Islamist, mistakenly bring the NRMA into the mess, and list out her favourite journalists in Australia.

“Comments appear to have been taken completely out of context,” she said.

“Media across Australia have been blinded by hate and bias towards One Nation and myself, and rushed to report on heavily edited footage these covert recordings have been seen, in full, and the footage has been heavily edited.”

Hanson urged her supporters that the meetings between NRA officials and One Nation reps had only occurred because Al Jazeera set them up.

“Let me make it clear to the Australian people: I have never sought donations or political guidance from the NRA.”

Accusing the media and others of falling for a ploy aimed at destroying One Nation, Hanson denied Ashby and Dickson had traveled to meet with the NRA in an effort to weaken Australia’s gun laws. She did, however, confirm she had personally approved of their visit on the basis that they learn campaigning techniques and meet with other elected officials.

“This is Australia’s first piece of severe political interference from a foreign government.”

“How much involvement did the ABC have in this illegal, covert operation?”

Despite referring the Al Jazeera report to both ASIO and the Australian Federal Police, Hanson said she had not heard back from either organisation.

This marked the end of perhaps the most formal part of Hanson’s statement, as she continued along a path of denying she had questioned the validity of the 1997 Port Arthur massacre. Hanson claimed her words had been edited to portray a narrative other than what she had said. Decide for yourself:

Later, Hanson discussed the future of the two party officials who had found themselves caught up in this mess: Ashby and Dickson. Both, she said, would be staying in their current roles and both, she said, had said stupid things.

Ashby and Dickson stood either side of Hanson while she made her statement, Dickson looking particularly uncomfortable. 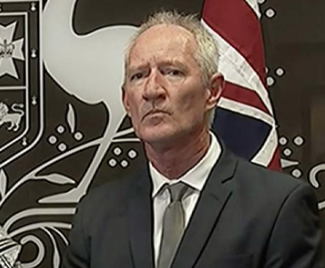 “There has been a deliberate and intense effort for years to destroy James Ashby’s credibility… he will not be given a trial by media,” she said, referencing “stupid remarks” he had made.

“It brings me to Steve Dickson. When I first saw the initial hit piece and Steve Dickson’s comments I was disgusted but having watched my own comments, knowing how out of context they were, I knew he was stitched up.”

The rest of the conference was suited more to a YouTuber riffing off topics they thought would garner more attention and audience.

Hanson asked for money from the public and bemoaned the Murdoch press before literally listing out an extensive scroll of Australian journalists she liked – which ranged from Andrew Bolt to Kyle Sandilands to someone called Dubbo.

This morning, the ABC released a statement saying Al Jazeera’s report was commissioned and produced entirely by the Qatari-based outlet. “The ABC was not involved in the making of the program in any way,” says the statement.

“I am answerable to the Australian people only and they will have their say at the ballot box,” finished Hanson, who did not take questions.

“No one is baying for your blood,” a voice could be heard saying off-screen as Hanson stormed out of the room.

“We just want some answers.”