Never ask a question you don’t already know the answer to. Any lawyer will tell you that.

Twitter polls are a bit the same. Particularly if you’re a politician looking to smugly reaffirm your own views on topics.

Only problem with that is you need to have the self-awareness to realise both a) who you’re asking, and b) what they’re likely to answer.

Somehow One Nation senator Malcolm Roberts – the one who managed to accumulate a grand total of 77 first preference votes in the election – has gotten it into his head that his batshit crazy and profoundly baseless “empirical evidence” arguments against climate change are, in fact, the majority mindset.

To back this up, old mate took to Twitter with a poll asking people what should be done with the $5billion of funds the Federal Government currently spends on green energy.

It could not have backfired on him any more spectacularly. 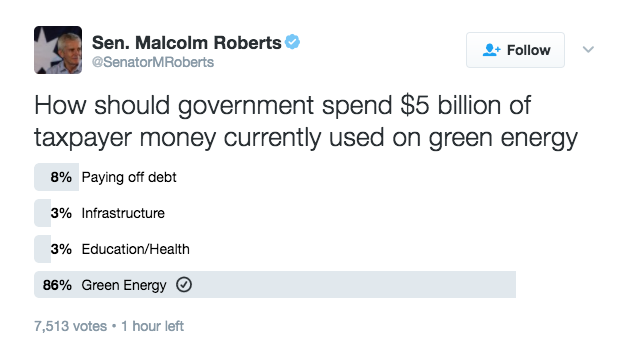 You can practically see his little-shit-on-the-bus-flicking-tickets-who-bursts-into-tears-when-someone-finally-arcs-up-at-him lookin’ ass smugly poring over the keyboard, utterly convinced that the “Green Energy” option was gonna get duck eggs.

‘Course when it very obviously didn’t, owing to the fact that on the subject of climate change he is both wrong and an idiot, Senator Roberts’ natural reaction was to go searching for excuses.

I think my poll has been rigged by the clean coal industry wanting their share of the $5 billion in taxpayer green subsidies. https://t.co/8dwOJhviQL

Unsatisfied with that result, Roberts decided to run yet another poll in an attempt to rinse those who voted in the first one.

Would you believe that not only did that too go awry, but it rumbled him even more spectacularly than the first.

“What are ya! A bloody SOCIALIST or someth-“

‘Course none of this will constitute any of the “empirical evidence” of public support for climate action that Roberts keeps bleating on about. As far as he’s concerned, that shit is probably resting in a dusty binder hard up against the actual Holy Grail.

Here lies Malcolm. Felled by his own online hubris.