Oh Good: A Whole Bunch Of Nazi Posters Popped Up All Over Oz Today

I don’t think there’s a lot of merit in trying to rank the various forms of racism by the level of stupidity it requires to advocate them, but surely Nazis have to take the cake. You either have to ignore the entire established historical record of a time not that long ago to contort yourself into holding the belief that the Holocaust didn’t happen, or you have to be a huge enough turd of a person that you can somehow believe the Holocaust to have been morally justifiable. You’d think these people would be few and far between, but, somehow, these fuckers just keep cropping up.

Their latest showing in Australia has been papering universities in Victoria and elsewhere with flyers for their bullshit movement, seemingly convinced that someone’s 10-minute Photoshop job will convince passersby to adopt one of the most reprehensible moral philosophies possible.

As the Bendigo Advertiser is reporting, members of the Antipodean Resistance (a bunch of nerds doing fascist cosplay) chucked up their shitty posters on campus at LaTrobe University Bendigo and a number of other “tertiary education campuses in Footscray and Ballarat“.

Rob Stephenson, head of the Bendigo campus, said they were taken down pretty quick:

We became aware of a relatively small number of posters on campus and on other properties in the area. A number have been taken down and security removed others they could find. Police have been advised.

University of Melbourne‘s student publication Farrago today reported that two men were escorted off campus for “allegedly harassing students” while handing out leaflets saying that it’s “OK to be white“, including calling one student a homophobic slur and spitting on the ground in front of another when she responded in the affirmative to a question about whether she was Jewish.

An adviser to Greens senator Peter Whish-Wilson posted photos today of stickers that had been put up on their electorate office in Launceston:

Our Launceston electorate office has been been plastered with neo-Nazi stickers pic.twitter.com/StnFWDa5iM

Some were also spotted in Brisbane‘s Fortitude Valley:

Some Nazi dipshit on Twitter was also bragging about posters being put up on campuses at Brisbane’s UQ and QUT: 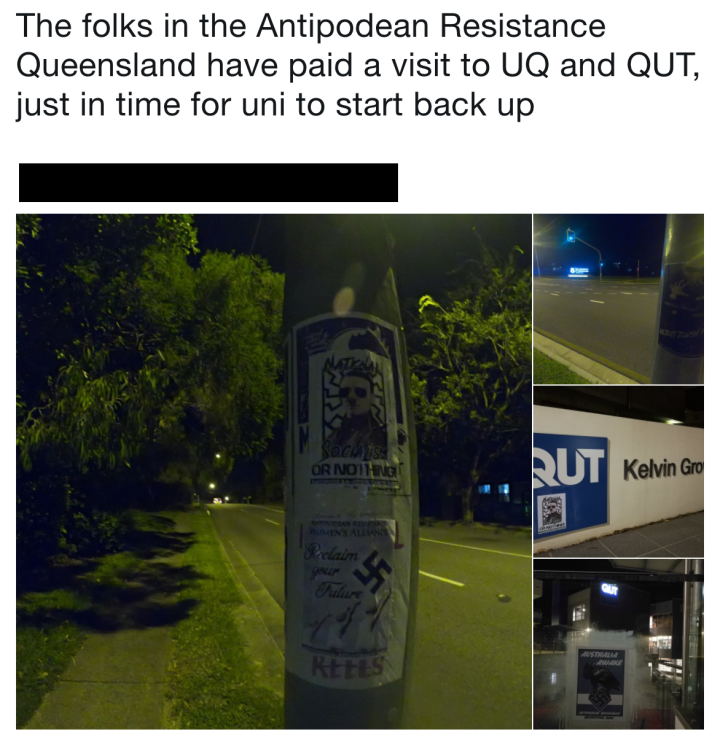 It is unclear if the events are unrelated or if there’s just some sort racist pissbaby holiday ritual they are all observing.

These people are racists shut-ins playing dress ups as Nazis because it means they get to pretend to be tough guys and deserve absolutely nothing but your laughter. What a joke.