MasterChef judge and Aussie food writer Melissa Leong has hopped onto Instagram to criticise the worst tasting potato on the market: Steve Price. It doesn’t matter how much butter you slather on this sucker, it’s still gonna taste like shit in perpetuity.

Leong took to Insta to slam Price for his dumb, stupid and idiotic take for the Herald Sun titled “I’m old, male and cancelled”. There will be no link, he can find clicks from the rats.

The whole article was about how old white men are being silenced these days and can’t really share any of their opinions because they’ll be criticised. Yeah, maybe because those opinions are dumb as bricks. Just a thought?

“Old male writer spends an entire page in the paper, talking about how he no longer has a voice,” wrote Leong.

“Please excuse me while I go and light a candle.”

Drag him queen. DRAG him. 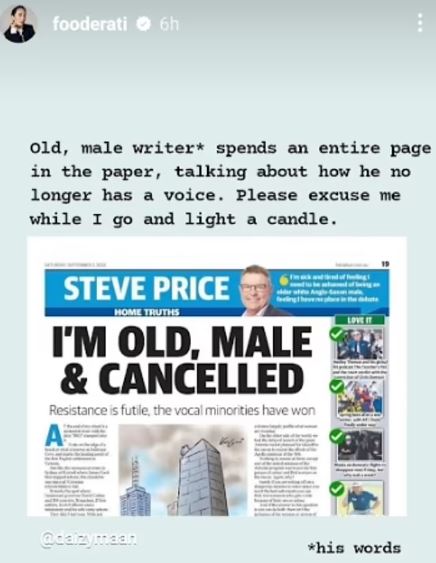 “Inclusivity and diversity do not come at the detriment of others,” she wrote in a second story.

“Sharing the stage with voices who have long been hushed, deserves your honour, not your ire.”

Melissa Leong has hit the nail right on the head. Price competing with minorities for a “voice” shows he doesn’t actually understand what minorities in this country are fighting so hard for.

Nobody wants to take anything from people like Price. We just want to see everyone get the ability to have their say and be treated equally without oppressive forces shutting them down and silencing them. In this case, and in most cases, that oppressive force is old, straight white men.

READ MORE
The Project STFU Challenge: Why Did An All-White Panel Debate The Aboriginal Flag On TV?

Speaking of oppressive forces, The Project — and Steve Price — were called out just a few months ago for featuring an all-white panel while debating whether the Aboriginal flag should replace the coloniser one.

Rachael McPhail, founder of Place Names In Addresses, shared a clip from the discussion to her Instagram page, calling out The Project for creating a “culturally unsafe space” with their all-white panel.

“It is really harmful to the First Nations community for people with racially oppressive views to be consistently given a platform to shut down any progress that we are making towards First Nations social justice,” she told PEDESTRIAN.TV.

“It’s not fair for our kids to hear an old white man saying that the only flag that matters is the Australian flag on a mainstream, prime-time news program.

“Our kids should be hearing the message that we, as a nation, are proud of the Aboriginal and Torres Strait Island flags, so they feel proud too!”