Though you might howl in horrible derisive fashion – lo, bray and holler you will! – at this headline; scream to the bloody heavens you will about how this is “not news.” “How is this a thing?” you all protest, loudly and angrily, fingers mashing both screen and keyboard in a feverish rage, clamouring to be the first and loudest to decry this whole article as purely a waste of time. “Imagine going to school for this!” you will guffaw, turning to receive your plaudits from the physical audience of none around you. “Someone got paid to write this!” you bemoan performatively, aghast at the notion of someone conducting paid work for such trivial nonsense. You scream and bleat and bash your fists on the desk. But through it all, you fail to consider the following:

I *did* go to school for this. Someone *is* paying me to write it. And it’s not not news.

Malcolm Turnbull is currently on the war path at the moment ahead of tomorrow’s Super Saturday batch of by-elections, which take in a whole bunch of fairly crucial electorates.

One such electorate, the Tasmanian seat of Braddon, is of particular note. Incumbent LaborMP Justine Keay was one of the many politicians to fall afoul of the Section 44 debacle last year after it was revealed she did not fully renounce her British Citizenship until after she was elected in 2016.

The by-election for the seat sits on a knife’s edge between Keay, who is re-contesting the seat she resigned from, and Liberal Party representative Brett Whiteley, who held the seat from 2013 until being defeated by Keay at the 2016 election.

In that poll, Keay won on preferences. This by-election looks set to wind up being decided in a similar fashion, meaning the man who likely has the fate of the electorate in his hands is a genuinely insane fisherman by the name of Craig Garland; a pro-logging and anti-national parks local who also vehemently supports Bob Brown and various environmental causes.

Additionally, he was once convicted for assaulting an off-duty female cop in a bar brawl in Geelong back in 1993, and is currently running on the campaign slogan of “Stand up and fight or bend over and take it.“

So that’s the guy whose preferences are gonna decide the election, more or less.

But, I digress: The pie.

Turnbull was touring around Braddon yesterday in support of Whiteley’s campaign, and as part of that they stopped in the town of Ulverstone (home of the mighty Ulverstone Robins Football Club) and grabbed a bite at the remarkably good Oliver’s Bakery and Cafe. A good, honestly, knockabout country town bakery that’ll get you a bang-up pie and a choccy milk for well under a tenner. Real salt of the earth gear.

So Turnbull eats a pie for lunch, and he does so with a knife and fork like a fucken lunatic. 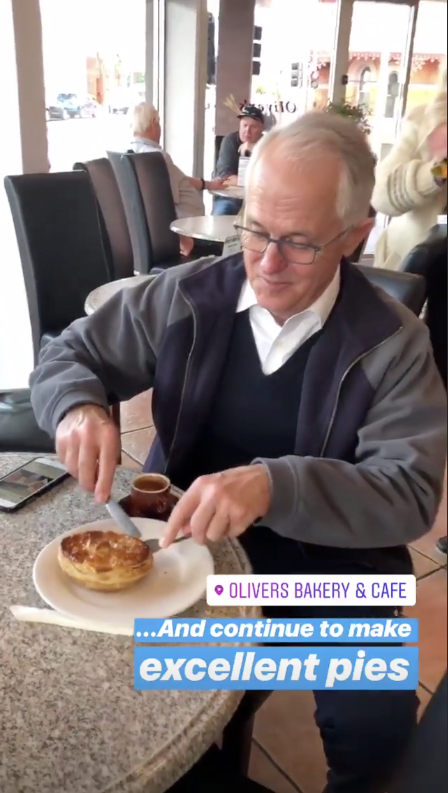 Don’t get us wrong here. Knife and forkery at a bakery is perfectly ok if you’re sitting down for a feed. Gotta maintain proper decorum and all.

But old mate’s in there going under the pie lid, lifting it up like a manhole cover. Which to some of you might seem trivial and inconsequential and the lowest peg on the ladder of things which Prime Minister Turnbull should be criticised about.

But to any of you who, like I, are galaxy brain geniuses, this ranks as a clear affront to God and a brazen middle finger to Tasmania’s hard-working blue-collar middle class.

Classism at its most egregious and clearly a jailable offence.

It’s not not news.