Just a heads up: this article makes frequent mention of suicide. If you think you could find that unpleasant or uncomfortable, you might want to give this one a miss.

Over the course of March 19th and 20th, 1997, 39 people in Rancho Santa Fe, California committed suicide by asphyxiating themselves with plastic bags after ingesting a mixture of phenobarbital, apple sauce, and vodka. They did this under the belief that doing so would cause their souls to board a spaceship that was travelling in the wake of the comet Hale-Bopp. Those 39 people were Heaven’s Gate founder Marshall Applewhite and 38 followers of the UFO cult he started with Bonnie Nettles.

Two days ago, a guy in a Facebook group for VHS collectors that I’m in (please do not ask why I am in a Facebook group for VHS collectors) posted a picture of a stack of videotapes that he claimed he had been sent by Heaven’s Gate. This seemed weird for two reasons. The first obviously being that the group quite famously committed suicide in 1997, making it somewhat weird that they would be sending out promotional material. The second reason is that it’s deeply strange that people are making and disseminating VHS tapes in 2018. 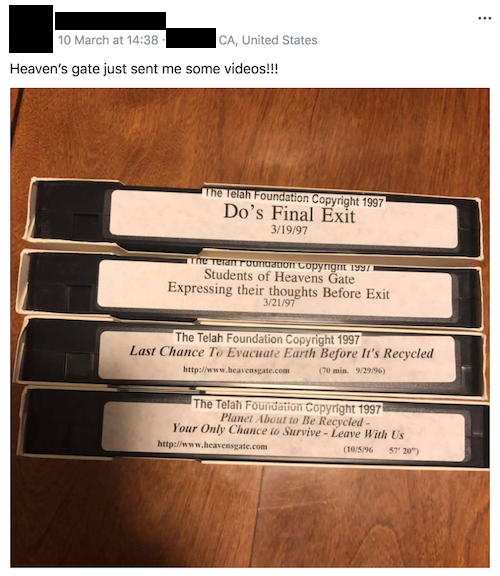 Sure enough, if you visit their website, they offer these “materials” free of charge, but would appreciate it if you “would like to copy them and return the originals to [them]” so that they can “make them available to someone else“. It appears they might not be entirely free, though, with an earlier post from someone else in the same group who had bought the tapes (a bunch of people have done this, it seems) stating that he paid Heaven’s Gate “six bucks” in exchange for four tapes. Still pretty good value for money, I guess, if that’s what you’re into.

The website itself is definitely something to behold, preserved as a textbook example of the typical GeoCities page from a time when websites were largely made to showcase the insane beliefs of isolated and vaguely computer-savvy hermits.

Pictured: Graphic design is my passion.

As you would expect from the antiquated website of a suicidal UFO cult, the content on the site is frequently unintelligible and even more frequently completely bonkers. The only real indication that the website is maintained in any fashion is the fact that they are still responsive. Not only will they send out videotapes to weirdos in Facebook groups, they’ll also quite quickly respond to questions. I tried to ask whether they would mail tapes to Australia (I had to try) and was, within 24 hours, sent a reply containing the link to their Vimeo channel. Yes, Heaven’s Gate has a Vimeo channel.

The channel is exclusively the uploaded VHS rips of their pre-suicide educational videos. It contains interviews with members of the cult; the final video done by leader Marshall Applewhite immediately in the lead up to their suicide; and around 14 hours of ‘Beyond Human’ sessions – monologues delivered by Applewhite done as a sort of instructional Q&A that, by all appearances, seem to have been recorded in one marathon go. 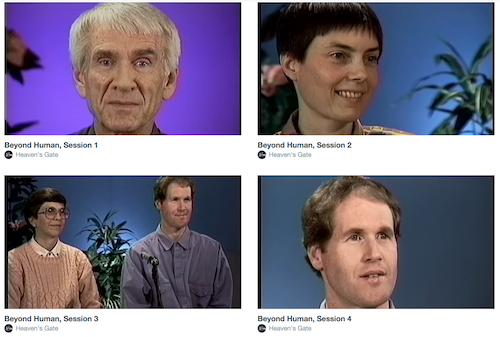 The videos were all uploaded around 5 years ago, throughout April and May of 2013. The channel’s description says that the videos were uploaded by the “TELAH Foundation“, but stresses that there is no active Heaven’s Gate group to join:

The video on this channel was produced by members of the Heaven’s Gate group. It is being provided here by the Telah Foundation for those who wish to know what this group was about and why these individuals devoted themselves fully to their pursuit of the physical Kingdom of Heaven. . . . The posting of this video does not indicate there is another group to join as there is none.

According to an email interview posted on the Reddit blog in 2015, the website’s hosting and registration is similarly looked after by the TELAH Foundation (purportedly based in Phoenix, Arizona), all done under the name ‘Mark King‘. TELAH, as the Heaven’s Gate website explains, stands for “The Evolutionary Level Above Human“.

In the Reddit interview, the subject gave their name as ‘Telah’ and their age as 61. When asked if they are a man or woman, they replied “both“. As Vice has reported, it is believed that the website is maintained by couple Mark and Sarah King. According to Telah / the Kings, they were charged with the task of staying behind for precisely this purpose:

We were asked to fill the position of maintaining the website, emails and the physical, and intellectual properties. It was very clear and we were honored to do it.

Seemingly, they believe that those that ‘departed’ will be coming back and that it’s their duty to make sure people can find out about Heaven’s Gate in time for the return:

The information must be available to mankind, in preparation for their return. We don’t know when that will be but those who are interested will find the information.

They also addressed the elephant in the room – the, y’know, suicides – and said that that won’t be happening anymore:

Suicide is futile. The human condition is to be born, live a life, die and reincarnate again. Committing suicide is a waste of time. You just have to repeat the lesson steps again. There is no heaven or hell, only an endless cycle of reincarnation. Only those 38 individuals were allowed to break that cycle and enter the Next Level. They were the first of this planet to actually do that. Only the Next Level can give that permission.

It is some insanely weird stuff that you are free to read and watch at your leisure but I highly, highly don’t recommend getting swept up in a UFO cult. You’ve got better things to do with your time.