America might have finally nabbed a suspect in the gripping case of the Golden State Killer, but here in Australia we’ve now also put a pin in a long-running crime that terrorised a neighbourhood: Brisbane’s infamous Poo Jogger.

The Shitting Fit Boy had been plaguing the streets of Greenslopes, in Brisbane’s south, for a number of months, with residents counting as many as 30 unwanted turds brazenly left behind on public paths and residential courtyards by the rectal menace.

Incensed at the audacity of the early morning CrossShitter, resident Steve Smith hatched a plan to catch him red-assed. Together with a neighbour, Smith plotted the Crap Artist’s running route, his times, the frequency of his deft defecations, and set a cunning trap. Smith, armed with a night vision camera, lay in wait in some bushes outside a frequent locale of the crim – exercising a little Turdal Recall, if you will – for a few minutes each morning.

Just before 5am on May 11th, Smith hit paydirt. 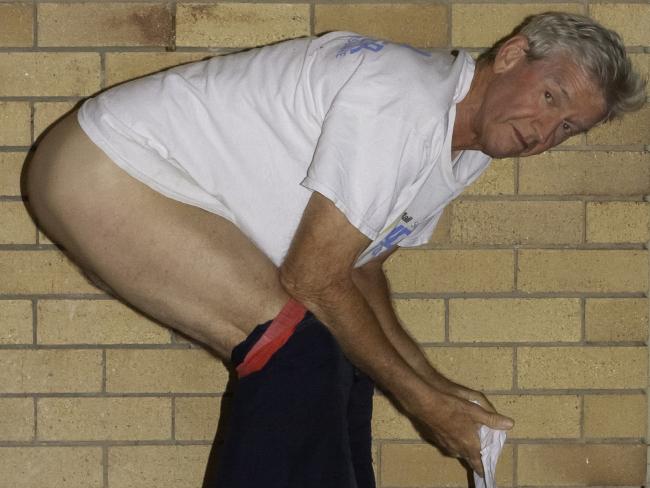 The calmness. The steely gaze and determination. The pre-meditation with the clutched loo roll. Unbelievable scenes.

After snapping the photo of old mate snapping one off, Smith expected the Bogging Bandit to hurl abuse at him. Remarkably, the man simply said a friendly “hello” before continuing on his way. As you do.

Police subsequently used to photo to identify the alleged Poo Jogger as Andrew Douglas Macintosh, a 64-year-old bloke who quite remarkably holds the very affluent job of national quality manager at Aveo, which is Australia’s pre-eminent retirement village corporation.

Macintosh also sat on a Brisbane City Council board in an advisory role overseeing planning issues.

Police charged Macintosh with one count of public nuisance, which was heard in Holland Park Magistrate’s Court earlier this week. Macintosh’s solicitor attempted to have the case dealt with as an infringement notice, but the matter was adjourned with the court stating the case was likely to be withdrawn.