Protesters have won their battle to have the name of Brisbane eatery ‘Uncle Ho’ changed.

Protestors picketed the venue, and campaigned for the name change due to the fact that the bar/dinner venue’s name references Ho Chi Minh, a Vietnamese communist dictator. Many Vietnamese people left their country to come to Australia after the Vietnam War ended in 1975.

Around 100 people picketed the venue over the weekend, during which time the business remained closed with their doors locked.

Director Anna Demirbek posted a strange comment on her Instagram page (now deleted), stating that she was fully aware of the insensitive nature of the name: 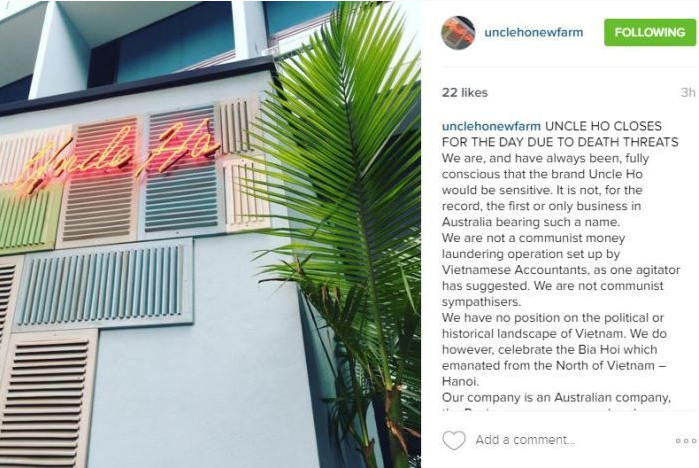 However, hours later she gave a statement to Newscorp announcing that she had conceded and would be changing the name of her business:

“We wish to announce that we have registered the name Uncle Bia Hoi and have commenced proceedings to change our trading name in the coming weeks.

We trust that bullying, harassment and threats against our team and property will now cease.”

President of the Vietnamese Community in Australia, Dr CT Bui, spoke to ABC Radio in Brisbane this morning, saying protests will continue unless imagery of the dictator himself are removed:

Dr CT Bui, president of the Vietnamese Community in Aust (QLD): unless they remove the image of Ho Chi Minh we’re not going to stop #uncleho

Dr CT Bui: We will continue to write to the solicitor. We will ask for support from the public. We will protest every month. #uncleho

Dr Bui also spoke to the Courier Mail before the protest went ahead, saying that he had made contact with Demirbek, but she said it would cost “too much money” to change the name:

“The communist people called him Uncle Ho. That is Ho Chi Minh. He is a mass murderer, a dictator.

People can support the communists, but the Vietnamese people here are the people who ran away from them. We don’t want anything to do with the communists.

I have nothing against her, but I am very against the name Uncle Ho because that brings back the bad memories, the nightmares for people who lost their families. Every time they think about it, they cry.

521 soldiers from Australia and New Zealand died fighting against Ho Chi Minh and the communist army. Why would you bring the name Uncle Ho?”

The new name of the New Farm restaurant is ‘Uncle Bia Hoi’, a name of a popular Vietnamese beer. However, the name on the company’s website still stands as ‘Uncle Ho Bia Hoi’.

We will update this story as more information arises.