A Rigorous Investigation Into Whether Or Not Bigfoot Fucks

For reasons I cannot possibly fathom, Bigfoot is rarely in the news. This gentle and elusive wood-ape only enters into most people’s minds when something sensational happens. Whether it’s a political candidate being outed as an author of Bigfoot erotica or that same candidate declaring that he is simply curious about Bigfoot, not horny for him, it takes dramatic circumstances for the LAMEstream media to ever give Bigfoot the coverage he deserves. For some of us, Bigfoot is always on our minds. Not an hour passes in my life where my thoughts don’t drift towards that the silken-haired and likely-psychically-gifted Lord of the Forest, the noble Sasquatch.

Thanks to some combination of his own powers of illusion and the cover-up being undertaken by the CIA, the FBI, the NSA, the military, NASA, and SETI, we know very little about Bigfoot for certain. We know that he loves the woods. We know that he is large. We know that, in proportion to his body, his feet are even larger still. We know that he smokes weed. We know that he can communicate with animals (and sometimes hikers) using only his mind. This much is obvious. But his origins, his diet, his family structure, his day-to-day life, and so many other things about him remaining shrouded in mystery. Most importantly, we don’t even know for sure if Bigfoot fucks or not.

READ MORE
'Discovering Bigfoot' Is The Best Documentary On Netflix

Personally, my beliefs are quite traditional in this regard: there is only one Bigfoot, and he arrived on Earth in roughly the 25th century BC, hitching a ride with the aliens who came here and built the Great Pyramid of Giza. I believe that he is the only member of his species, immortal, and ageless, and that he teleports between all the great forests of the world for fun. But how can we possibly experience personal growth if we don’t challenge our beliefs? Other experts* in the field have hypothesised that he is a sexual creature who loves to lay pipe, and I believe that this theory must be explored as well, for completeness.

If we assume that Bigfoot’s biology roughly adheres to that of a terrestrial mammal (a frankly huge assumption given his celestial provenance), it then logically follows that the species is propagated via sexual reproduction. If this holds true, we could then extrapolate from any evidence of a Bigfoot family the necessary fact that Bigfoot – in the words of Rob Zombie – gets it out and gets it on. If we use the loose criteria for what constitutes ‘evidence’ in Bigfoot circles, that evidence certainly exists.

In October of last year, a farmer in Fresno County, California reported seeing a ‘family’ of Sasquatches, as relayed through paranormal expert Jeffrey Gonzalez: “One of them, which was extremely tall, had a pig over its shoulder. And the five scattered and the one with the pig was running so fast it didn’t see an irrigation pipe and it tripped, with the pig flying over.” Incredible scenes.

In February of 2015, it was suggested that a piece of footage from one of the many livestreams in Wyoming’s Yellowstone National Park showed a group of four Bigfoot stalking a herd of buffalo.

In 2011, a woman in Newaygo County, Michigan told Discovery News that she regularly feeds a family of 10 Bigfoots that visit her home:

They get fish every day, a bucket of fruit, a bucket of dry dog food. Their favorite thing is blueberry bagels. If I’m not baking them, I go to different stores to buy them. I tell them they are feeding the wildlife.

This startlingly beautiful article from 2015 covering a Bigfoot conference in Hot Springs, Montana includes a story told by one of the participants about a Bigfoot mother defending her juvenile son from an armed man.

But why trust our own inferences when we have expert testimony on the subject? Retired Oregon zoologist Dr Henner Fahrenbach told the Texas Bigfoot Conference in 2008 that not only does Bigfoot love to fuck, he loves gangbangs:

“When an especially large male came onto the scene,” Fahrenbach said, describing a sexual pileup involving one willing female and lots of dudes, “he didn’t try to buck the line but simply stood there and took his turn in good time.”

Alright, so if we accept that Bigfoot fucks, the next question is ‘when’. David R, a poster on the esteemed Sasquatch Chronicles forums, speculates that it goes on throughout the year:

A prospect that forum moderator Knobby finds slightly too pleasing for my taste:

Wow David, that image of the female squatch is seared in my mind; I’m sure I speak for the other guys here that we would like to get out in the forest and come across that one!

In their profile of the creature, the website Bigfoot Finder notes that mating season is from “March through April” and that they have been observed doing it “doggy style“. They also note that Bigfoot is immune to pepper spray and “incapable of sneezing“.

The Bigfoot Field Researchers Organization offers up a later mating period, running from May to June. They suggest that mating is mostly between “established pairs“, with a birthing period between February and May.

They also have this wonderful chart that plots age to height and foot size: 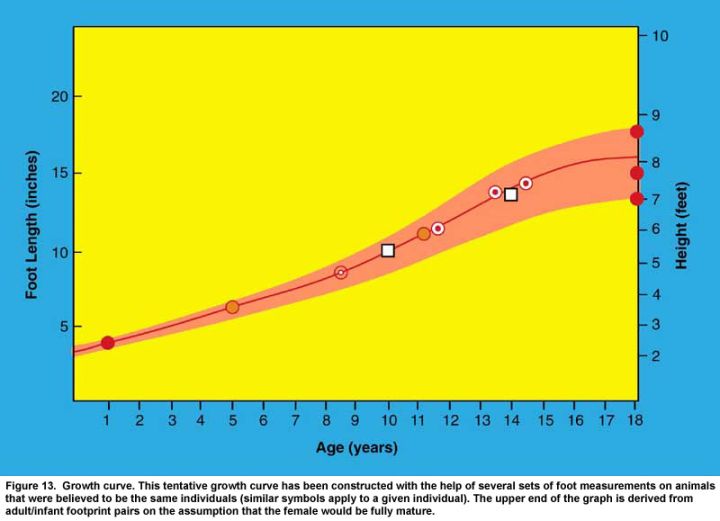 But this is a rather simplistic view of Bigfoot sexuality. Surely, if we are to accept that he is a hyperintelligent transdimensional psychic forest hominid (I estimate his IQ to be somewhere around 250), we must also accept that the sexuality of Bigfoot would be at least as rich and complex as our own. As author Loren Coleman suggests, if the proportion of homosexuality among Bigfoots was the same as among people, why wouldn’t 10% of Bigfoots be gay?

You can draw your own inferences from the evidence presented, and you certainly wouldn’t be blamed for coming to the conclusion that Bigfoot is a big hairy root rat whose gigantic balls are drained basically 24/7. My personal beliefs remain unchanged – there is one Bigfoot and he is eternal. But I will concede this: Bigfoot is definitely bisexual.