Barnaby Joyce fired up at a screening of a medical cannabis documentary this week, admitting that he pulled “a few cones” in his uni days, but refusing to back the drug for cancer patients.

While medical cannabis was legalised in Australia in 2016, it remains difficult to access, and the filmmakers behind documentary High As Mike are pushing for greater reforms in the area.

READ MORE
Is This The Year Medical Cannabis Finally Goes Mainstream In Australia?

Medical cannabis campaigner Lucy Haslam invited Joyce to attend a screening of High As Mike in Tamworth last Thursday night, then sit on a panel afterwards.

He declined to sit on the panel, but arrived several minutes into the screening and stayed for a Q&A session at the end, and it’s here where things became heated.

Haslam, a retired nurse, lost her son to cancer in 2015, and maintains that medical cannabis helped alleviate some of the most painful symptoms he suffered during chemotherapy.

Barnaby Joyce has previously supported Haslam, and even sent her a letter congratulating her on her medical cannabis advocacy. On Thursday, however, he took a different tack.

In a video from the night, seen by Pedestrian, he angrily declares:

“I was there when my brother died, it kills you. It tears you apart. I don’t want someone saying there is some miracle elixir that we somehow missed. That is not the truth.”

He goes on to say:

“If you want to pull a few cones knock yourself out, god knows I did when I was at uni. But that does not mean for one second that there is some grand elixir or … that there is some hope that somehow my brother Timothy would be alive if this happened. I get furious with that, unless you show to me that this is the case.”

Based on his comments, Joyce seems to believe that medical cannabis is being touted as an actual cure for cancer, as opposed to a form of pain relief, a baffling take to say the least.

Speaking with Pedestrian, Haslam said that she was deeply disappointed in Joyce’s remarks, and remains in a state of disbelief several days later.

“The film is about how medical cannabis can alleviate the pain associated with chemotherapy,” she said. “He completely missed the point.”

“He disregarded so many of the people in the audience and trivialised their suffering,” she continued, saying she actually invited him at the request of those hoping he could be their voice in Canberra.

Director Daniel Raffaele, who was also present and took the video, told Pedestrian that was “embarrassed” by Joyce’s behaviour.

“There were sick people in the room looking for answers, cancer sufferers and their loved ones, and instead he made it all about him,” he said.

The film’s producer said that Joyce seemed “enraged” during his appearance, but his representatives denied this, telling The Daily Telegraph:

“Mr Joyce was not enraged. However he remains cynical of mystic ‘cures from Nimbin’ which some pronounce in pursuit of publicity and profit.”

Pedestrian has approached the Member for New England for further comment. Below is a copy of the 2016 letter he sent to Haslam. 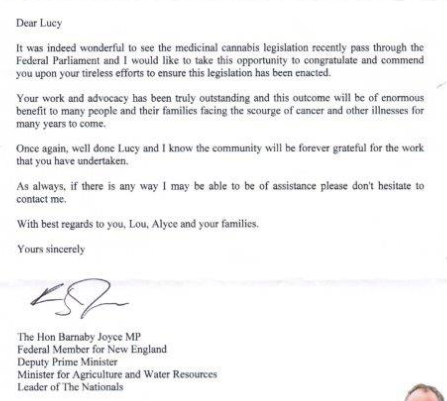