Two ABC journalists in Malaysia were arrested and detained for six hours after trying to question Prime Minister Najib Razak over a $1.4 billion corruption scandal.

Reporter Linton Besser and camera operator Louie Eroglu (whose work includes the phenomenal doco The Killing Season) are in Malaysia rn on assignment for ABC 4Corners.

On Saturday night, they approached Razak in the street and tried to question him over allegations that as much as $1.4 billion had been deposited into his personal bank account, when they were both arrested. On Sunday morning they were released without charge – and eventually had their seized passports returned to them – but both have been told not to leave the country.

The whole thing is descending into an argument about the free press and ethics. Malaysian police released a statement that claimed the two breached a security line and “aggressively” tried to approach the prime minister, while ABC 4Corners executive producer Sally Neighbour says they were simply doing “what journalists do in countries with a free press”. 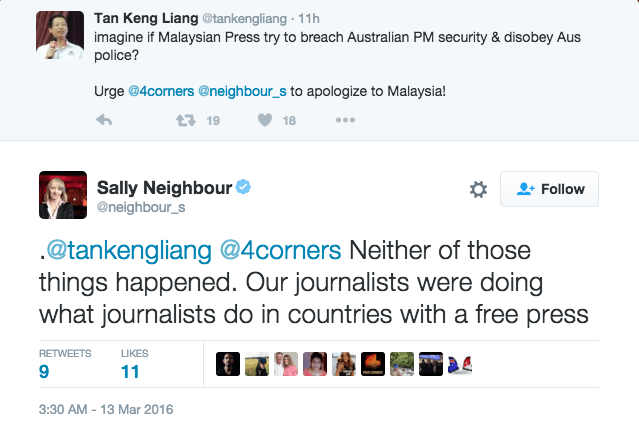 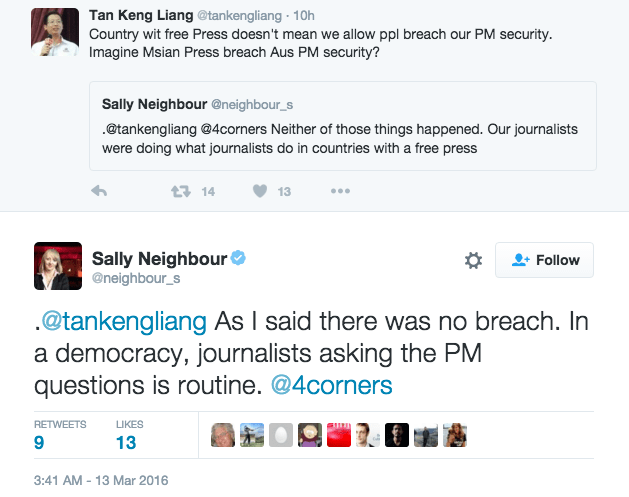 Tan Keng Liang is one Malaysian politician who’s absolutely livid over the journalists’ actions, if his Twitter is any indication. Below are a sample of what amounts to several dozen tweets in the last 15 hours, slamming the journos and Australia in general.

should foreign press be above Msian laws? Can they breach security of our PM @NajibRazak ?
Imagine if they breach Obama security? Ethics pls

some foreign press treating us like 3rd world country. These ppl don’t deserve any respect from us. And they should never be above our laws

For the record, Razak has been under scrutiny for a year over the alleged cash injections into his bank account, leading to political leaders across Malaysia last month calling for his removal. He has denied any wrongdoing.

Besser and Eroglu remain in the country.