We don’t know why all the gorilla enclosures in every zoo in the world are effectively busting all at the same time, but yeah, that appears to be what’s happening.

Only six months after a little boy managed to get into the enclosure of Cincinnati Zoo‘s gorilla Harambe (leading to the beloved ape’s tragic and unnecessary death, may our beautiful boy rest in peace now) the London Zoo has this morning had a similar scare.

Their very handsome western lowland silverback gorilla Kumbuka escaped for over an hour, and was roaming around the zoo at his own discretion. 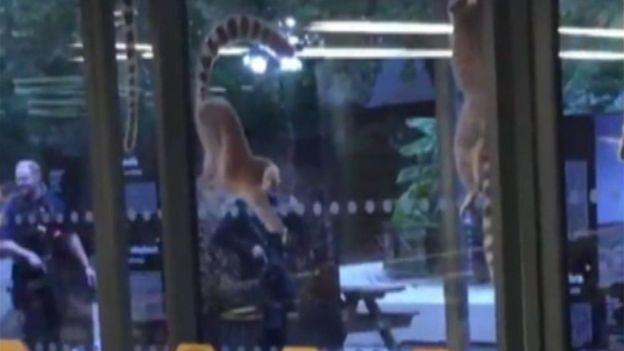 A gorilla has escaped from its enclosure at the London zoo, after throwing itself at a window to break free. #9Today https://t.co/gTveXVgpOv

Thankfully, the BBC reports that Kumbuka has now been recaptured alive and well. He was shot with a tranquilliser dart, and was safely returned back to his enclosure.

The curator of mammals at London Zoo Malcolm Fitzpatrick gave a statement to the BBC, saying,

“At 17:15 our male gorilla got out of his back dens into a secure keeper area. Our staff were able to respond quickly and Kumbuka was tranquilised and returned to his dens.

We’re happy to report that he’s up and grumbling, and interacting with the rest of his family in his gorilla kingdom.”

No one was hurt, and no one – animal or human, was killed. Eyewitness to the incident Brad Evans told media he had been visiting the zoo with his daughter and son-in-law and they did not want the gorilla to be shot.

DO YOU HEAR THAT AMERICA? THE BELOVED APE LIVED. HE LIVED, BECAUSE PEOPLE TOOK ONE OF THE OPTIONS BEFORE ‘SHOOT TO KILL’.