Despite our tiny emo hearts being broken by the knowledge that My Chemical Romance postponed their massive return to Australia a whole year, there’s a sliver of a silver lining to it all: new dates.

Yep, there are brand new shows that have been announced, joining all three sold-out dates in March 2023. So for any of us reformed emos (or those still in the throes of the scene) who weren’t fast enough to buy tickets before they sold the fuck out, here’s our next chance.

The new dates are set to line up with the existing shows in Sydney, Brisbane and Melbourne, and will probably sell just a fucking quickly, to be honest. My Chemical Romance will now also hit Brisbane’s Entertainment Centre on Monday, March 13, Melbourne’s Rod Laver Arena on Thursday, March 16, and Sydney’s Qudos Bank Arena on Monday, March 20.

Tickets for the new dates are on sale from 12pm midday on Wednesday, December 15 from Live Nation, with a sneaky pre-sale happening for members on Tuesday, December 14 and 3pm.

So if you missed out last time, this one’s for you. Or if you’re an enormous MCR stan, here’s your chance to back it up and see Gerard Way and the lads two nights in a row.

In absolutely devastating news, My Chemical Romance have postponed their string of shows in Australia and New Zealand a whole fucking year.

The big tour, which was meant to kick off in Auckland on March 12, 2022, has now been rescheduled to March 2023, with the band citing international border restrictions and changing venue capacity limits as the reason for the 12-month delay.

“Due to the uncertainty regarding international border restrictions and indoor venue capacity limits, to ensure that we can honour every ticket purchased the My Chemical Romance tour dates scheduled to take place in March 2022 have now been rescheduled,” the statement read.

All of the tickets sold will be valid for the rescheduled shows, so keep those handy and make a note in your calendars. If you can’t make it to the new dates, you’ve got until December 10 to request a refund from the place you frantically booked them from in the first place.

Look, it’s lucky that MCR fans have had years of practice dealing with emotions, angst and a general disdain for life, because this absolutely sucks and blows.

It’s been a long time coming, but the kings of emo – My Chemical Romance – are finally returning to Australia for a string of massive shows next year. Dig out your busted-up pencil eyeliners, dust off your big stomping Doc Martens, and back-tease your hair in the bathroom again, we’re absolutely on here mates.

The New Jersey band is getting the Black Parade back together again to march down under next March, hitting three huge dates for a run of arena shows – their first proper gigs in Australia since 2012. That’s ten whole years since we’ve seen MCR in the flesh.

My Chem is set to scream into the country on March 14 with a show at Brisbane Entertainment Centre, before flicking down to Melbourne on the 17th for a show at Rod Laver Arena, and then finishing up the tour at Sydney’s Qudos Bank Arena on Saturday, March 19. Three bloody huge dates to get to and be a part of the congregation in the Church of Emo, what a vibe. 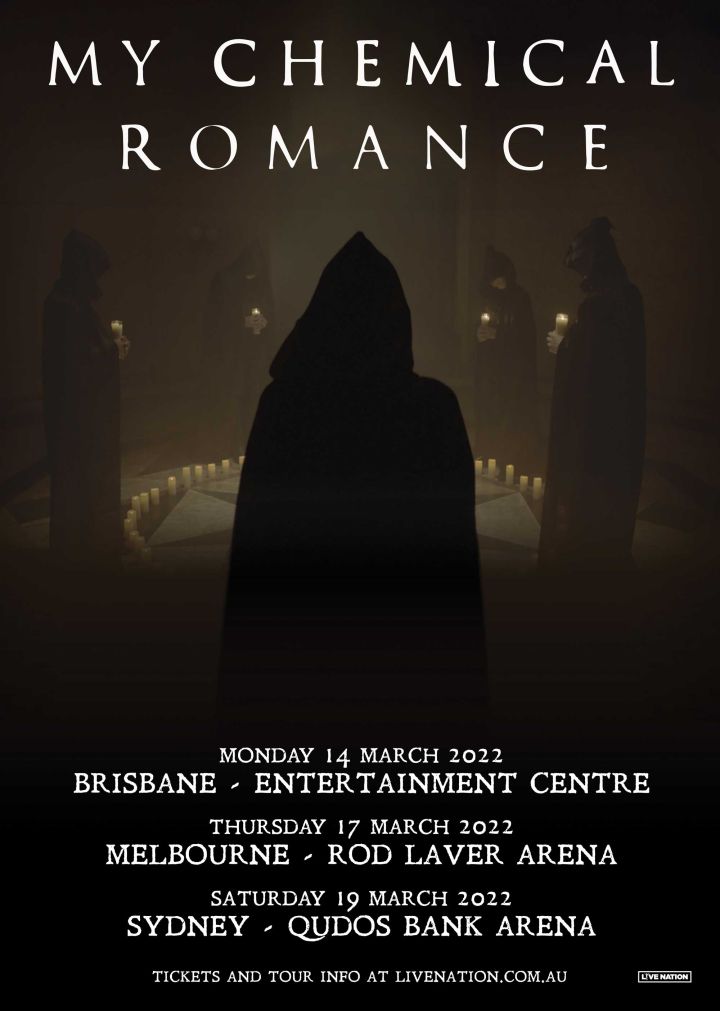 Seriously, I’m just going to blast Three Cheers For Sweet Revenge on repeat for the next 10 months. That’s the level of deep excitement I have about this tour.

Tickets for all three shows are locked in to go on sale from 12pm midday on Thursday, May 27 (with a very cheeky presale happening for Live Nation members on May 26 at 11am). Time to light that group chat the fuck up to see who’s keen to be the Helena to your Gerard Way, or who’s going to dig out their old Emily The Strange t-shirts and studded leather belts especially for the occasion.

Before hitting Australia, My Chemical Romance will also be doing a quick nip over to our bubble mates over in New Zealand, with a show at The Outer Fields at Western Springs in Auckland on March 12. I’m sure there’s a few of you long-time diehard fans that’ll be booking flights for that one to really lean into all your dormant emo feelings.

I dunno if it’s the mix of feels from being deprived of big, international tours for the last 12ish months, or the sudden rush of teen angst coursing through my veins but I’m so incredibly excited for this one.

See you front and centre, let’s open this fucken pit up.