‘We Have No Horizon’: Melbourne Music Venues Say Entire Industry Could Be Weeks From Collapse

Owners of music venues in Melbourne have warned they could soon be closing up shop because of what they said were unfair COVID restrictions placed on them by the State Government.

It comes after management of the John Curtin Hotel in Carlton announced on Tuesday it would shut down in November after 150 years.

READ MORE
Legendary Melbourne Venue The Curtin Hotel Is Closing Down In Nov, So Pour One Out In Memoriam

Music festivals with thousands of patrons have been pumping through Melbourne summer. Large, premium venues like the Forum and Sidney Myer Music Bowl are back up and running after two years of restrictions. But the city’s beloved small and mid-size bandrooms and clubs have mostly sat silent since January 6 when the State Government reintroduced the one person per two square-metres density limit for hospitality and indoor live music venues indefinitely.

Howler in Brunswick has had all its shows from January through to April — many of which were sold out — cancelled because the artist’s promoters have taken them to larger venues to make sure all ticket holders can attend.

The Butterfly Club in the CBD cancelled 17 shows in January and postponed many more, while those that remained were only allowed to bring in 37.5 per cent of the venue’s capacity.

And the Curtin has only been able to run one show since the density limits returned.

The Curtin’s closure is the tip of the iceberg.

The industry is sinking, and without lifelines from the government the entire live-music ecosystem that feeds Melbourne’s once thriving creative scene could never recover.

Howler’s bandroom has a capacity of 420 but under restrictions can only fit 165. When lockdown lifted late last year the bookers spent three months filling the calendar with shows, all of which have now been moved to larger venues. The shows haven’t been postponed, because Brogan said there was no end in sight.

“We have no point at which we can tell promoters, hey we’re going to be back at full capacity when’. We just don’t know,” he said

“We need that capacity. Pubs, bars and restaurants normally trade closer to the one per two sqm, we trade at one per 0.75sqm and without something approaching that, we don’t exist.”

Brogan said Howler was under genuine financial pressure with the current restrictions and was facing some hard decisions.

“The realistic outcome, unless we get restrictions lifted or we get some government funding, is that we have to repurpose that room,” he said.

It’s unlikely at this stage the whole venue will close, he said, but there’s a real possibility it could lose its music room the way it is now.

“Perhaps the roof gets ripped off and it becomes a beer garden or something.”

“We’re paying for lighting, sound; I’ve got a sound tech, I’ve got bookers — they’re all still getting paid but we have no shows.”

Butterfly Club owner Simone Pulga told PEDESTRIAN.TV there has been no communication from the government regarding when restrictions would lift, or why they’re in place at all while businesses like gyms could operate at full capacity and major events could go ahead with thousands of attendees.

“There has been no health advice coming our way to explain that,” he said.

Pulga said without a timeline it was impossible to make any long-term business decisions.

At the moment, he’s just trying to hold out for April when the Melbourne International Comedy Festival brings in the venue’s busiest weeks.

“April is high for us, we have 250 shows scheduled then and if we cannot take advantage of full capacity for that period it’s going to be very hard for us to make it til the end of the year,” Pulga said.

But he said if Melbourne lost any more entertainment venues, its standing as a city of culture and its entire music and arts scene could perish.

“As a venue owner you might expect me to be cynical and cheer when the competition closes down, but that’s not how our industry works.

“We need other venues because the artists who perform here need to make a living when they’re not performing here. We need a solid ecosystem,” he said.

“I think we’re weeks away from the risk of systemic collapse.”

Long-time music booker for the Curtin Paris Martine told PEDESTRIAN.TV the government needed to step in to save the scene because small and medium bandrooms were “career-building venues”.

“Artists don’t come out of the womb ready to play the Myer Music Bowl,” she said.

“A room of our size at 250 [capacity] is really vital to the career progressions of the artists that we work with and that’s the way live music operates.

“If we start seeing those venues fall, then you don’t have those rooms for those artists to develop their work in.”

She said ultimately, whether the Curtin was up for sale or not, the reality was that the density limits took away 50 per cent of the business’s trade, which made it unviable.

“If you’re constantly having to ask for rent relief then that doesn’t put you in a great position with your landlord going into negotiating your next round of lease.”

Martine, Brogan, Pulga and owners of other iconic venues including the Old Bar and the Leadbeater Hotel, as well as musicians and drag performers, have joined forces to call for action from the State Government.

Martine said the State Government needed to remove density limits for hospitality and entertainment venues. She said it was unfair smaller venues were subjected to them when major events were allowed to go ahead.

Se said it should also offer more protection within the planning laws for these “very very rare” pubs and music venues with late-night licenses to incentivise landlords to hold onto them.

The Save Our Scene campaign penned an open letter from Victoria’s music venues to the State Government early last year that called for support for crippled businesses while restrictions were in place to bring the industry back from “brink of collapse.” 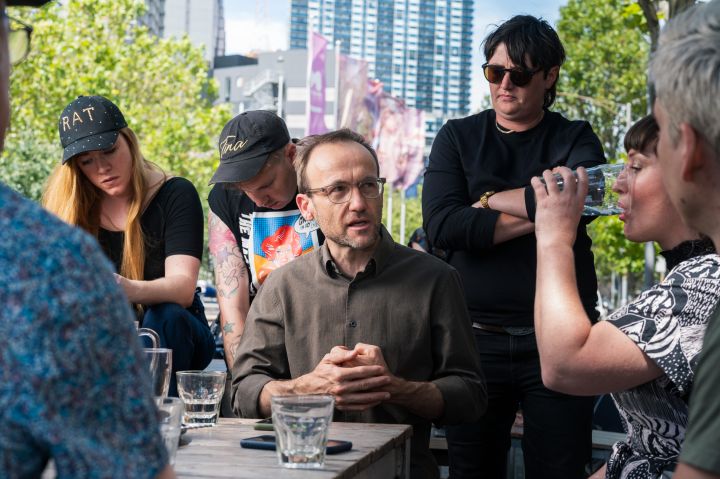 “Live music is the beating heart of Melbourne, but venues and artists are going under and some may not resurface. If the COVID restrictions are staying, then live music venues and musicians need support to weather the storm,” Bandt said.

But so far Premier Daniel Andrews has made no announcements not set any dates for restrictions to lift.

“It can’t continue to go on like this,” Martine said.

The Greens have launched a petition calling for emergency relief for venues. Take a look here.