A roadmap for the Australian entertainment sector has been demanded by Melbourne musician Alex Lahey, in an open letter penned to Prime Minister Scott Morrison this week.

In the letter, which Alex posted to her social media on Monday and tagged in several politicians, she called for a federal government-funded insurance scheme and wage subsidies for the thousands of Australians who make up our expansive and devoted music and arts industry.

She recognised that despite being aware that her industry would be “the first to go down and the last to come back”, minimal effort has been put in from the government’s side to support and prop up this particular commercial sector – which has now been largely shut down since March 2020.

The biggest question on Alex Lahey’s mind is: what is the roadmap for the entertainment sector to survive the COVID-19 pandemic?

“Tens of thousands of gigs are cancelled with every month that passes,” Alex wrote.

“The necessary snap lockdown strategies, in particular, bring a complete lack of ability to plan and budget for gigs and events, causing collective mental health and confidence to continue to slip with every postponement and cancellation.

“But despite the turmoil we face as a collective and as individuals within our industry, Federal Government promises continue to be broken and schemes have been left behind.”

She claimed that the RISE Fund – a $40m “boost” for the creative sector announced in July last year – has not propped up the industry at all, and the “trickle-down intentions of this scheme have not come to fruition, leaving performers, crews, and venues empty handed.”

READ MORE
Aussie Stars Reveal The Total Devastation Of Their Industry, Work & Future Thanks To COVID-19

Alex cited a letter sent to the Minister for Communications, Urban Infrastructure, Cities and the Arts – The Hon Paul Fletcher MP – about the way the funding has fallen short, written by Sophie Kirov of touring agency, Lost Motel.

In the four rounds of [RISE] funding, Contemporary Live Music specifically has received $44 million in funding across 69 tours, events and festivals. To date only 10 of these have been seen to execution, with the event occurring and suppliers and crew paid; representing a mere $6 million.

Of the remaining $38 million that has been allocated to Live Music, those funds sit untouched in the bank accounts of the Promoters of cancelled, postponed, or entirely unannounced beneficiaries while our Industry crumbles.

Alex said that without the direct financial support, the industry is “eating into itself”, and runs the risk of not only losing an entire generation of talent and crew, but also having its confidence in taking commercial risks completely decimated.

After posting the open letter online on Monday, the post has been shared widely by many in the Australian industry, from Natalie Bassingthwaite to Jack River, confirming that her thoughts are shared throughout the community.

Greens party leader Adam Bandt responded in the comments that his party is going to “fight tooth and nail” to get the entertainment industry the support it deserves. 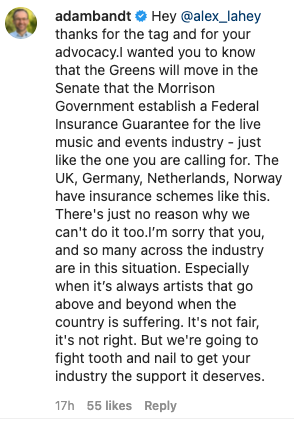 “The Greens will move in the Senate that the Morrison Government establish a Federal Insurance Guarantee for the live music and events industry – just like the one you are calling for,” he wrote.

“The UK, Germany, Netherlands, Norway have insurance schemes like this. There’s just no reason why we can’t do it too.”

Labor politician Hon. Tony Burke shared the post to his own Instagram story, noting that Alex’s words “say everything about what arts entertainment and events workers have been going through and what government can do to help”.

Greens senator Sarah Hanson-Young also used her platform to promote the letter, reposting it in full to her Insta grid, and saying she’s willing to contribute in whatever way she can.

At the time of writing, no other politicians or federal parties have responded to Alex Lahey’s open letter.