We Laid Our Bodies On The Line & Tested A Period Cup, Turns Out It’s Not As Scary As It Seems

Period cups or menstrual cups have been around for a while now, but they’ve always felt so intimidating. I mean, the idea of literally pulling a cup full of blood out of your vagina with your bare hands two to four times a day is a lot. And it raises questions like “how do I even get it up there?” and “how do I clean it in a public bathroom without looking like I murdered someone???”.

Safe to say that every time I thought about making the switch, it just felt like too much, so I benched it. That was until I agreed to try one in the name of content. Yes, you could say I did this for you, dear reader.

A few months ago, I was sent The Hello Cup — a menstrual cup that claims to be the world’s most comfortable period cup and is the equivalent of more than 2000 single-use tampons or pads — to review. But before we get into it, let’s start with the basics.

READ MORE
Everyone & Their Dog Has A Period Underwear Line Now, So Which Ones Are Actually Worth Buying?

What is a menstrual cup?

A menstrual cup is a small, malleable cup — kinda shaped like a mini wine glass. It’s made from medical-grade silicone and can be folded and gently pushed up into the vaginal canal where it forms a seal and catches the blood, much like a tampon. After it’s inserted, it can be worn for up to 12 hours depending on your flow, and when it’s full, you simply flush the contents down the toilet and wash or wipe it out before reinserting.

How do you use a menstrual cup?

I won’t lie to you. The first few times you insert and pull out a menstrual cup are pretty tricky, mostly because you use a shallow pinching technique to insert the cup and a slight squeeze and slow pulling technique to get it out. You can watch a pretty solid demo video by The Hello Cup right here.

What size should you use?

Sizing all depends on how your uterus sits and how heavy your flow can be. It’s super important to figure out the right size period cup. Otherwise, it can be an uncomfortable experience for you. Most brands will provide a size guide, so be sure to check those out. Hello Cup goes the extra mile and gives you a fun little quiz to help you find the right fit.

As long as your cup is the right size, is inserted correctly and emptied when needed, it shouldn’t leak. That said, just like all period products, it can happen. From my experience, for the most part, I had minimal spillage. The only time I did was when my period was super heavy, and I needed to empty my cup more regularly. If you’re worried, you can always wear a liner or a pair of period undies for your first few usages or overnights until you get a feel for your flow.

So, what happens when you have to take out your cup in a public bathroom?

Ah, my biggest fear heading into this was having to empty the cup in public. It turns out it’s far less scary than it sounds! Make sure you wash your hands before you pop into the toilet, pull it out slowly and empty it in the toilet bowl. If you don’t have access to a sink to wash it out with cold water, you can always wipe it out with a bit of loo paper before reinserting it. Once you’re done, sanitise your hands and clean the sink if you’ve washed it out. If you do wash it with a mild soap between uses, make sure you rinse it thoroughly before reinserting.

How do you clean your period cup?

As mentioned above, you can wash your cup during your period by either rinsing it with cold water alone or by adding a little bit of mild soap. Post-period, wash and sterilise your cup before you put it away. It’s often recommended that you pop your cup into boiling water for at least three minutes (use a timer so that it doesn’t boil dry!) or soak it in a glass of cold water with 1/4 sterilising tablet for 15 minutes. Do not leave your cup soaking for longer than 30 minutes, as this may damage the cup. Then, make sure your cup is fully dry before you store it.

Is there a risk of Menstrual Toxic Shock Syndrome (MTSS) when you’re using a menstrual cup?

Inserting anything into your vagina can put you at risk for MTSS. However, the risk for menstrual cups is super low. If you’re worried, chat to your GP first.

Are period cups cheaper than pads and tampons?

In the long run, yes! A period cup will usually set you back between $30–$45, which isn’t too bad considering the average period-having Australian spends about $60—$120 a year on menstrual products. Plus, depending on how well you look after your cup, you should only have to replace it every few years. Yep, that means wayyyyy fewer runs to the corner store for tampons!

So, should you make the switch?

It’s 100% your choice! If it helps, four of us tried them and here’s what we reckon… 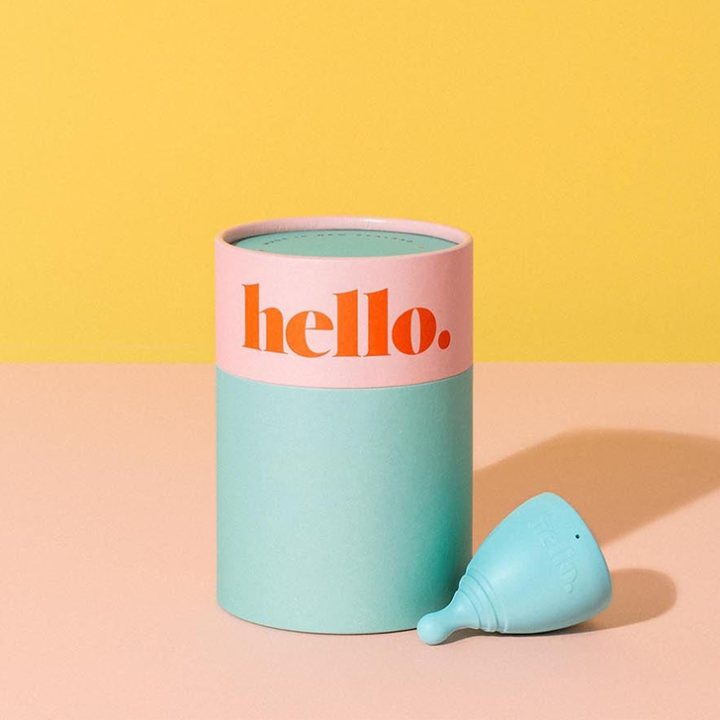 Joss: She comes in hard and fast and eases up significantly after a day or two.

Iz: Inconsistent! I never know what to expect.

Bree: The first two days are hell, then it usually eases up and ends around day 4.

What kind of period products do you normally use?

Linley:  I’ve tried other menstrual cups before but have mainly used tampons.

Bree: I’d only ever used tampons and period undies until now.

Have you ever used a period cup before? First impressions

Linley:  Yes! I liked the concept of it, but the first one I had — the stem was too long and felt uncomfortable.

Joss: I’ve been a cup queen for about three years now, and I’m obsessed. It’s literally so easy, and you can’t even feel it, and so low maintenance — chefs kiss.

Iz: Never! I was SO IMPRESSED. You only ever hear the horror stories (like friends who needed backup to retrieve the cup from the depths or about people who had it cascaded over during job interviews while wearing white… the usual).

Bree: Nope, the whole idea of period cups kind of scared me tbh.

Rate the difficulty of using/inserting the cup? (1 a scene from Carrie, 5 a piece of cake)

Bree: Again, day one was like a scene from Carrie, but by my second, it was more of a 4.

Linley: It folds easily to insert, but I found it harder to pinch and get a good grip when removing.

Joss: The folding technique is a little confusing and different to my previous cup, but I’m getting the hang of it. Also, a steady hand is required on removal — trust me.

Iz: Really impressed! I’ve rated 4 for both as it took me a minute to get used to inserting/finding the right spot. Once I knew what to expect, it was a really simple process.

Bree: Learning to fold and insert it was the hardest part. It felt like the first time my high school boyfriend tried to finger me the first time I did. Read: not great. And then getting it out was terrifying. But once you figure out the best way to do it, it’s no harder than popping in a tampon.

Was the cup comfy to wear?

Linley: Yes! I forgot that I was wearing it for most of the time. The cup and stem were very comfortable. The cup allowed me to get on with my life without needing to think about leaking or changing menstrual products often.

Joss: Period cups are literally the fucking bomb. They’re so easy and low maintenance that I often forget I have my period. My only call outs are that you should empty your cup before you do any yoga. Also, plan before if you’re getting turbo — it’s not impossible, but it’s definitely trickier to manage. Let me learn the hard way, so you don’t have to.

Iz: Seamless. I didn’t have to worry about it once. Admittedly, I tried not to change it while I was out, but there were a couple of times I did, and I just made sure I was in a cubical with a private basin just in case.

Bree: I was actually shocked at how comfy they are. Like, you know, when you insert a tampon in the wrong way, and it’s all sharp stabby pains, there’s none of that with the cup. I legit would forget that I had it in. I surfed with one in, did pilates every day of my period and would go for runs and play netball while wearing it. It was a literal dream compared to tampons.

Can you sum up your overall experience using the cup?

Linley: I like how long I can leave it in for — only needing to empty it 2-3x per day makes it easy to take care of when I’m at home and not need to worry about finding public bathrooms or in the work bathrooms.

Iz: It’s my new go-to! I love that it’s a more sustainable alternative to traditional period care and that it stood up to my crazy, inconsistent periods. But BE WARNED! I completely forgot I’d put it on the stove the first time I went to clean it and ended up melting it to the bottom of the pan (keep in mind, I’m known for leaving things cooking, and it did take +1hour to start smoking out the kitchen so this is 100% ON ME!!!) so just proceed with caution when you’re boiling in between uses.

Bree: It’s safe to say that I won’t use a tampon ever again. A cup is so much easier, comfier, cheaper and better for the environment. The Hello Cup claims to be the ‘world’s most comfortable menstrual cup’, and I 100% back it.

Will you/ have you continued to use the cup?

Linley: Yes, I will continue to use it!

Iz: Yes! I’m hooked. It makes it so much easier to get on with your day without having to think about where the nearest tampon disposal is, especially for hikes, camping, or just being on the move.

If you fancy trying out a period cup, you can buy the Hello Cup here. Oh, and did we mention you can snag yourself 15% off using the code PEDESTRIANTV. Ya welcome!