Sexuality is a lot like dinner at the (late but forever relevant) Australian buffet establishment, Smorgies.

Some people who go there stick to a meat-and-two-veg situation; they love their bain-marie roast dinners, always have. They don’t need to try the chicken to know they don’t like it.

Others are a little more adventurous. They want the powdery carbonara, a bit of zucchini fritter, heck, they might even give the soft serve a lick. It’s all there in front of them, and it all looks delicious – why not?

Some people just aren’t interested in Smorgies, at all.

All of these choices and preferences aren’t out of the ordinary, especially when you consider them through a lense of attraction. That’s been confirmed by new research out of the UK suggests that nearly half of young people identify as something other than straight.

Online surveying tool YouGov asked 1,632 British people to rank themselves using the Kinsey Scale – also known as the Heterosexual-Homosexuality scale – from 1 (straighty 180) to 6 (totes gay). Here’s an idea of what they were asked: 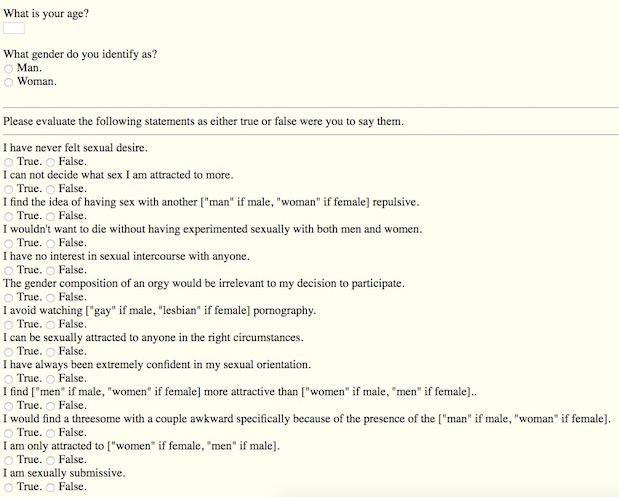 A total of 49 per cent of 18-24 year olds defined themselves as something other than totally heterosexual. I was personally ranked a 2 (slight homo), and told this: 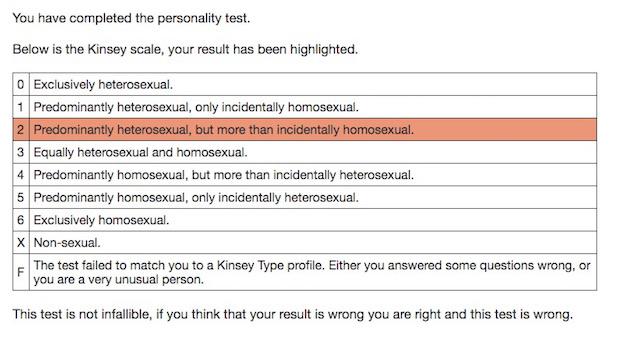 Of the 49 per cent officially surveyed, only six per cent identified as totally homosexual with the remaining 43 per cent placing themselves somewhere along the scale of sexual orientation.

In the same survey, 46 per cent of those aged 18-24 saw themselves as totally heterosexual.

The research is insightful as it helps dismantle the idea that there are clear cut categories we need to assign ourselves to.

Speaking to PEDESTRIAN.TV, Melbourne-based sex and relationship therapist Cyndi Darnell said she’s definitely seeing adjustments in attitudes around sexuality, and representations of difference in the media have definitely played a role.

“I think it’s a cultural shift. More and more people are just accepting of sexual diversity,” says Darnell. “If you watch the Deep Water doco on SBS [that spotlighted the spate of hate crimes committed against homosexual men in Bondi in the 80s and 90s] – it’s astounding how far we’ve come in 25 years in relation to distinctions as clear cut as heterosexuality and homosexuality.”

“People have been having sex we’d associate with heterosexuality or homosexuality for thousands of years. We have associated that with labels, with particular acts having more political power and that’s where the problem is. It’s not about ‘who’s doing who’ – it’s how it’s perceived and who holds social control with this stuff… it plays out in peoples beds.”

Turns out we’re not just questioning who we should be rubbing uglies with, but rather who we ourselves would like to be.

Strict gender roles don’t do us much good as a society, and while young people are more keen to question them, the older generation are a little more set in their ways.

“I don’t see it as much with older people – that’s not to say that’s a trend, that’s just what I see in my limited practice. In my context, younger people, by and large, are more flexible around those things,” says Darnell.

The research echoes Darnell’s experience. When you take all generations into account, a whopping 89% of Brits consider themselves full hetero.

Of course, heterosexuality is not dead, and it’s unlikely our generation is any more gay than the last – we’re just more open. Darnell reckons social media has played an integral part in our acceptance.

“It’s more through what we see in the media, and social media; the way that people are crafting their experiences. Young people tell their stories through social media, so there’s a stronger presence of such things compared to 10 years ago. It’s a chicken and egg situation though because of course social media didn’t exist in the abundance that it does now ten years ago.”

“People are talking about things that are neither heterosexual or homosexual. I’m excited to see where that goes in 10 years or so.”

You might remember Magda Szubanski ‘coming out’ on The Project back in 2012. She described her orientation in a very Kinsey-esque fashion.

“I am absolutely not straight,” she said. “I wouldn’t define myself as bisexual either. I would say I am gay-gay-gay-gay-gay-gay-a little bit not gay-gay-gay-gay. Unfortunately there’s not actually a word to describe me so I have to express myself through the medium of the dance.”

While Darnell sees the positives in coming out, she doesn’t believe it’s totally necessary for everyone.

“You never need to come out. It’s entirely up to you. For some people, it’s very dangerous to do that. If they live in a community that’s highly homophobic or conservative, the implications of coming out could cost them their life. It’s a choice, but it’s also not a neoliberal choice. It’s much more a case by case, circumstantial thing.”