Bethesda has teamed up with PEDESTRIAN.TV to share the joys of exploring the Appalachian wilderness of Fallout 76 with your pals.

Now that Fallout 76 has had some time out in the wild, stories from the Appalachian wasteland are starting to trickle through on places like Reddit and YouTube. Some are funny, some are a little frightening, but all of them show just how fun a multiplayer Fallout can be.

Here are some of the best stories we’ve seen so far.

Yesterday, someone stealthed up behind me wearing nothing but chameleon gear and whispered in my ear if I wanted to buy drugs.

Hey new kids, if there’s a guy jumping up and down and firing at a brown bag at his feet, he’s just trying to gift you some stuff.

Please don’t just stand there and look at me like I’ve gone completely batshit, I’m trying to give you some free supplies. I wish there was a “gift” emote.

Me and some friends zipped around the map inviting people to a Thanksgiving dinner. Imagine my surprise when people accepted! 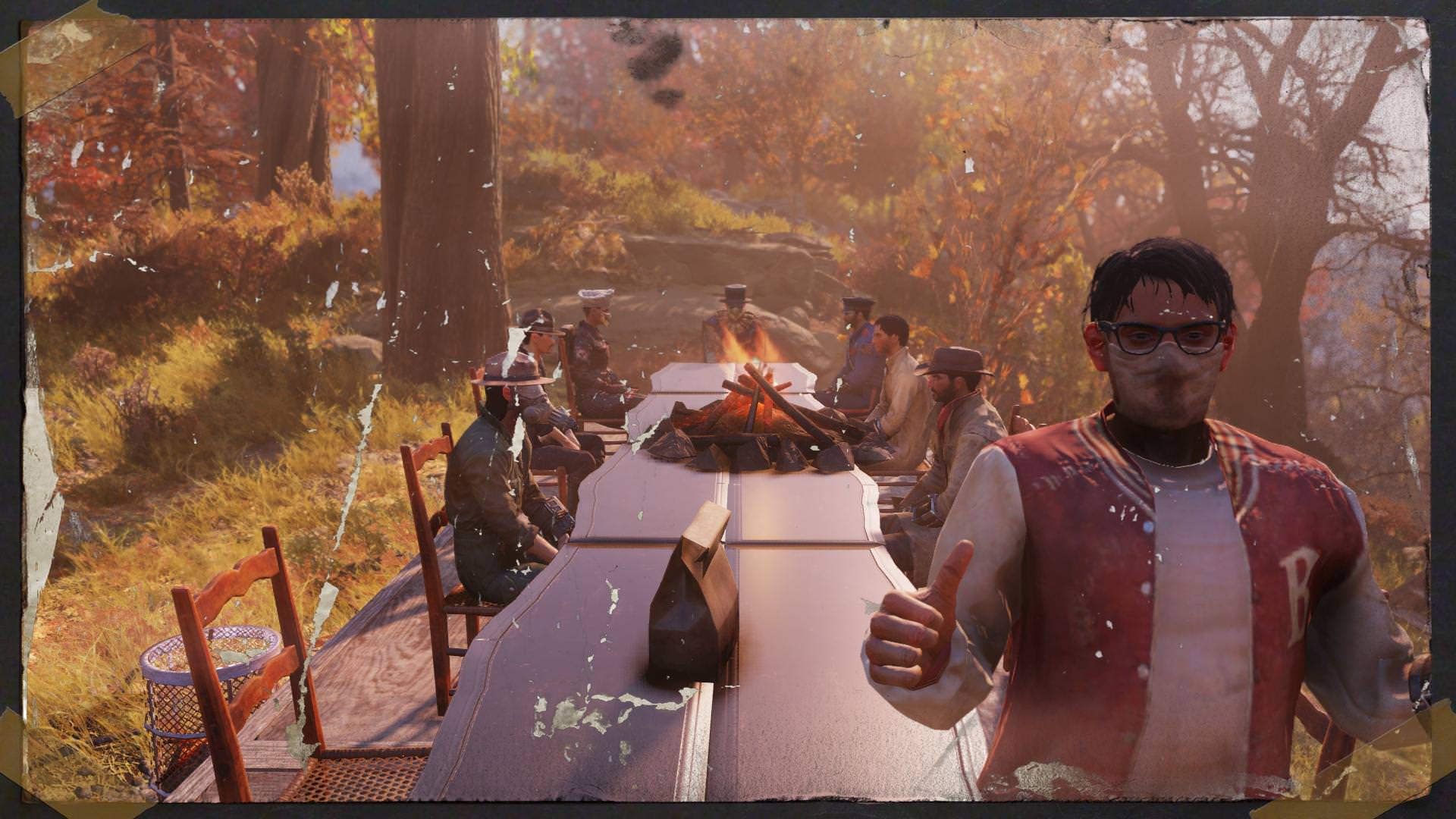 To the guy in underwear sitting in the outhouse of Middle Mountain cabins, I salute you. You could’ve been waiting there for hours as far as I know. But am I glad to have found you. Not a single word was said for the first 5 seconds after I opened that door, just a look of awe and wonder was all that had been exchanged. Until you uttered those magical words, “Got any toilet paper?”

Priceless. Fearing disease, I told you I would drop some stuff for you because I didn’t want to do business with those filthy hands. You kindly understood. I dropped a dishrag, a few raw cloth, antiseptic and a plunger because hey, you never know. You stood up, sifted through the bag and said “This’ll do.” I proceeded to pick up my raw cloth, antiseptic and plunger as you got back in the outhouse, closed the door and reclaimed your brown throne.

Since I’ve joined the Enclave, I’ve gone around to multiple player’s C.A.M.P.s dressed to the nines as an Enclave general. Upon approaching the other player’s bases, I typically walk in uninvited and wait for the player(s) to notice me.

Once they notice me, I introduce myself as General Blunt, and I calmly yet formally explain to them that I was made aware of a building that has been built without the Enclave’s permit to do so. I explain that this is a big deal and not to be taken lightly. Then I tour their base. If I like it, and it seems like it would reasonably pass a real building inspection, I offer them caps and building materials for their hard work, and I make them give me their full gamertag/username so I can send them a proper permit in the mail. (Of course this is bullshit, as there is no mail system or actual permit I can give them)

However, if I notice that their building is unrealistic, or has a structure or wall that is really close to breaking, I will blow something up/break the weak object with a super sledge to show them the dangers of building without the proper permissions. I then make them perfectly aware that I will return to the Enclave with my findings and that they can expect an orbital strike in 5-7 business days. (Which is also bullshit)

I’ve been gaming for a very long time, and I have always found role play to be dumb and childish. Watching people be completely bewildered with my actions in 76 has to be the most fun I have had in a fallout game, possibly ever. And what’s more is that the community is usually a really good sport about it.

I love this game.

“Can you turn that down a little?” – Jenifer Irwin, YouTube

I’m a life long Fallout fan, started on 3, fell in love with NV, went back and played the first 2, still enjoy 4 for what it is. And, like the majority on here, I’m enjoying 76. I got to level 20 in the beta, got my friends into it, even some skeptics, and am almost level 50. I have my share of gripes with the game: Stash size, frame rate, vendor cap limit; but none of them have truly detracted from my enjoyment of it.

Now, the way I saw a new side of Fallout was through my girlfriend. The girl, bless her heart, is not good at video games. She loves them, she admits she is bad at them, but she loves them. She bought a PS4 to play the new Spiderman game, the new Spyro trilogy, and sometimes Fortnite (yeah yeah I know) with me and a few friends. Anyway, onto the story.

She has never touched or heard of Fallout until she watched me play it. Tonight, she surprised me with a Snapchat showing she bought the game today and had downloaded it while waiting for me to get off work, saying how she wanted to learn to play it. I showed her how to make a character and then booted up my game to join her world, explaining some good beginner stuff while I did. I met her outside the Vault, got her a gun and machete and told her “You pick a direction.” So she did, and we ended up at the lighthouse near the vault. We killed a few enemies, did the Mothman event, and she learned about healing, looting, and crafting. She asked me if we could build a cabin in the woods, and when I told her yes she was super happy. So we built a two story cabin with a kitchen and garden (her two favorite things in life, aside from being a nurse) and… That’s it. We spent the rest of the night with her cooking, crafting what she could, adding decorations to the house, and tending her garden. Only occasionally fending off attackers. We even helped another new player by giving him food and water as he passed by. She asked me if she could always do this if she didn’t feel like killing, and was so happy I told her she theoretically could.

I spend so much time in this game looting, killing, grinding, and crafting that I forget it can be very relaxing and a (borderline) Sims like game. That being said… I’m gonna do my best to give her a little taste of the bloodlust tomorrow. See if my post apocalyptic housewife can become my raider queen.

But if you’re after something a little more visual, here’s a great montage of funny moments from YouTuber, Channel5 Gaming.

Good times. You can get Fallout 76 right now for PC, Xbox One, and PS4.