Last week, I was among the first group of people to play Bethesda‘s upcoming post-apocalyptic RPG, Fallout 76, at a real-world location which is actually featured in the game. While all the loved elements of the Fallout franchise are still here, the best moments of my playthrough came from simply dicking around in the world, which ended up with UFC champion Rob Whittaker and myself beating the piss out of each other.

Fallout 76 puts you in the shoes of a survivor emerging from a fallout vault 25 years after nuclear war has ravaged the planet. Set before every other title in the franchise, this one is played entirely online, meaning any human characters you come across will be fellow players as opposed to NPCs.

Split into groups of four, we all got to play for about three hours. Each team had a Bethesda representative who guided us through the first hour or so before setting us loose in the enormous world, which is four times the size of Fallout 4. Along with us was an English journo and Rob, who really just wanted to find other players to fight, but before we could take on others, we had to advance to at least level 5.

We all started off in Vault 76 where we got to customise our characters before setting off into the irradiated wilderness. I ended up giving mine a whole bunch of hectic facial scars, which look pretty badass if you ask me. I also named him after my new music project, Muscle Coight. 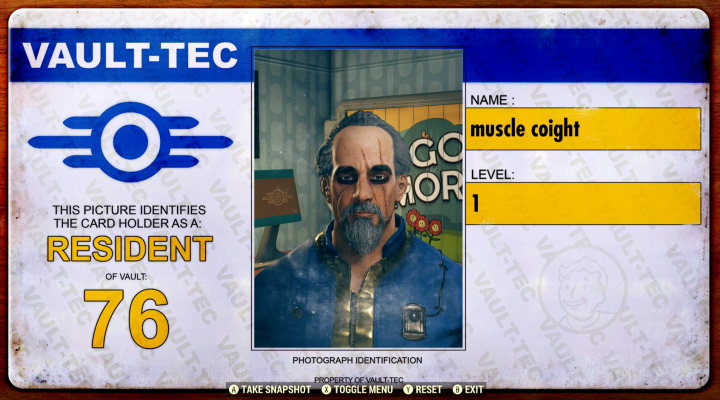 Once we were ready to take off, I met the rest of the team outside the vault and we headed towards our first objective – a nearby encampment with a bunch of workbenches. This part of the campaign serves as more of a tutorial than anything else, teaching players how to get around the world, complete quests, and how to craft weapons, armour, and other tools. I picked up a gun from a nearby corpse and used the workbench to modify it before moving on.

It’s easy to get distracted in Fallout 76, which certainly isn’t a bad thing in an open world game such as this. If the environment is interesting enough to warrant investigation away from your current objective, I say bloody go for it. We certainly did this, which ended up with Rob losing his clothes while we played a bunch of instruments. 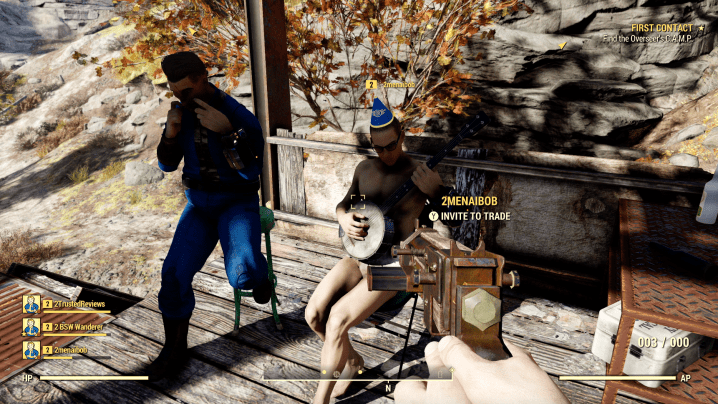 Funnily enough, it turned out Rob and I actually went to school together, so seeing his name pop up as menaibob had me in fucking hysterics. He’s an enormous nerd with a huge love for gaming, as well as a genuinely lovely dude, so we had a great time goofing around in Fallout. He’s also sponsored by Bethesda, which is why he was with us on the trip to West Virginia.

We continued to a small town where a kiosk gave us a new mission – test some dirty radioactive water (spoiler: it was pretty goddamn dirty), but I spent a lot of time chasing down a gross opossum for no real reason.

After completing the mission, we all levelled up and were able to boost our stats with a new perk card, which give special abilities that can be swapped out at any point depending on what kind of character build you want. I kinda spread mine out over a bunch of attributes just to give them a whirl, but Rob ended up focussing all of his on strength, which made him stupidly powerful with an axe. I don’t think he touched a gun the whole time.

Perk cards can be assigned under their corresponding SPECIAL traits (strength, perception, endurance, charisma, intelligence, agility, and luck) and are only limited by the number of points you have in each area. For example, having 3 points in strength will allow you to assign three different cards with one point, or two cards with ones and one with a two, etc. 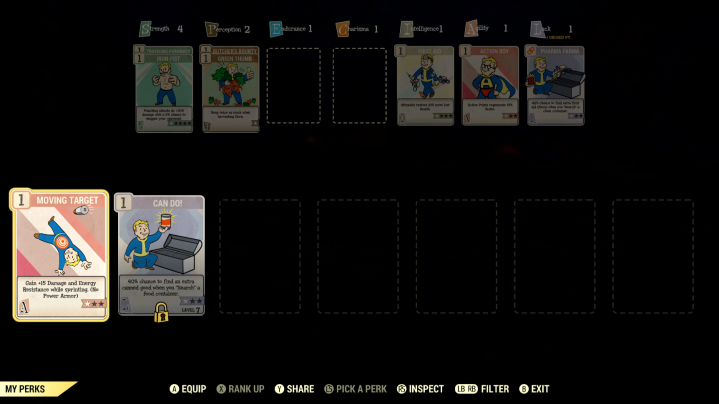 We then headed on over to a new location to set up a base of our own. We chose a dilapidated house next to a field on the basis it would be easy enough to defend should trouble arise. After scrounging around for scraps to craft with, we set up our base and made some goods for ourselves.

Right on cue, hoards of robots attacked our position, so Rob and I went ahead to fight them off while the other two hung back and picked them off from a distance. Luckily, we were able to take them all out without sustaining too much damage.

Hitting the targeted level 5, Rob was eager to seek out and destroy some fellow human players around the world, but there was a problem; we were way ahead of everyone else in the server and had to wait for them to catch up to level 5 as well. Attacking them now would have no effect, so to kill time, we went to check out Fallout’s version of the Greenbrier resort, which is where we were playing in real life at that very moment.

It was quite a walk and we got attacked by a bunch of hulking bastard Super Mutants along the way, so we had to take them down first. Luckily, we were able to scavenge some decent gear from their corpses before continuing. We eventually reached the area and had a look around, marvelling at how accurate it was compared to the actual place, which felt kinda eerie in its post-apocalyptic state. My pal and fellow journalist @Grizwords did a way better job than me at combing a real image with an in-game one, so you can suss that out below.

As an aside, it’s important to me that you all know how utterly haunted the Greenbrier is and that all of us experienced some extremely weird shit over the two days we were there. You can read more about that below.

After spending some time exploring and finding myself a great dress to wear, I fast travelled to the rest of my team – which you can do at any point, making exploring on your own practically encouraged – finding that Rob had left the team so he could kill us all, which he managed to do extremely easily with nothing but an axe. It’s important to note that when attacked, the other player must fire back to do full damage. Attacking someone out of nowhere does very little damage to them, but if they return fire, PVP is initiated and your weapons will then have their full intended effects.

Because rob funnelled all of his skills and perk points into strength, he was a goddamn beast and our guns did barely anything to him. He took me down a fair few times and I couldn’t stop laughing at the whole thing – a bunch of players with useless guns getting torn down by a single bloke with an axe yelling “HIT ME” over and over. Classic stuff. 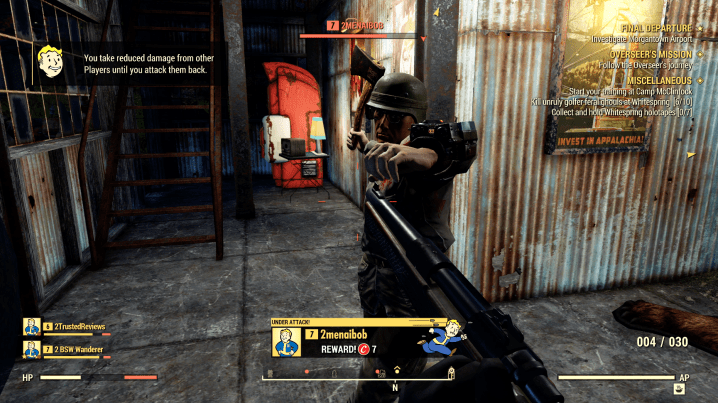 The only penalty for dying is that you drop any junk you have on you at the time, which is only useful for crafting, not survival. If you’re killed by a creature of the wild, you can go find your stuff and grab it, but if you die at the hands of a human player, they’ll probably jack your shit before you can make it back to your corpse.

But this low-key punishment makes moments like these all the more fun. Dicking around with your mates for a little while and sharing a few laughs before moving on to whatever objective you set out for in the first place never feels forced or like a waste of time. Fallout 76 truly lets you experience the world at your own pace, no matter what that might be.

We all headed back to the Greenbrier to root around for some more supplies and whatnot before seeking out some more people to attack, killing a heap of ghouls along the way. 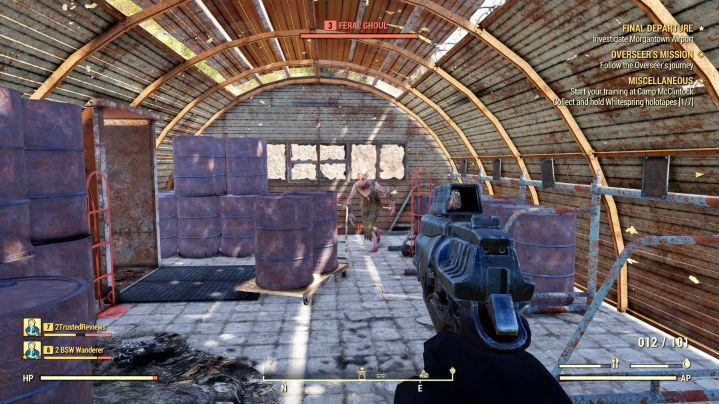 We had a decent skirmish with another team, killing each other over and over again, which isn’t something that would necessarily happen when the game hits full release in November. There’s a couple of reasons for this, the first being that we were getting towards the end of the demo and everyone just wanted to see how the PVP aspects worked. Once everyone got over the novelty, they all returned to their respective activities.

Secondly, killing someone without being engaged by them makes you a wanted murder, which paints your location on the map as a big red dot, offering anyone who kills you a bounty which comes out of your own stash. Of course, no one gave a shit in this setting because our supplies would mean nothing once the demo finished, but I reckon it’ll be a decent deterrent to incessant griefing in the real world. I mean, it won’t discourage everyone, but at least you know they’ll get just as messed up for it as you did.

But Rob was still hungry for blood, so he decided we should start a fight club on the road. Fists only, fights to the death. I managed to get a bunch of good shots in, but it turns out Rob is actually very good at punching folks in games, too, so he beat the shit out of me. It was genuinely hilarious.

It all started out pretty fair until he started taking me out in as little as three punches. It took me a while to figure it out, but eventually, I noticed that he had equipped knuckle dusters, which you can see on his hands in the pic below. 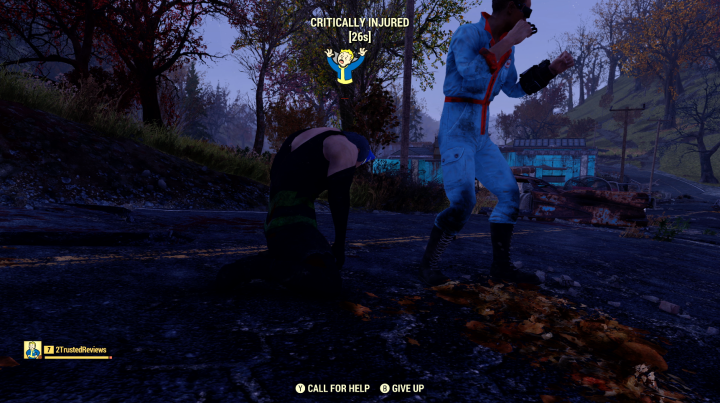 Once we got tired of beating each other up, we were treated to front-row seats of a nuke explosion, which was pretty wild to see up close. I ran into the madness to see what would happen and lasted about 15 seconds before the radiation took me down. You can see the video for that at the link below.

READ MORE
WATCH: Here's What Being Nuked Looks Like In 'Fallout 76'

While many may be concerned with the online title and what it means for the series, I can honestly say it still feels just like a Fallout game should. In fact, I’d argue that setting the game in a player-populated world makes it all the more engaging and allows for a silly kind of fun that fills in the gaps between questing quite nicely. To me, that’s what makes online experiences like this entertaining.

There are no rules or boundaries enforced on your approach to Fallout 76. In fact, so many of its mechanics outwardly encourage exploration and a do-what-you-want attitude. In every other aspect, this is a Fallout game through and through, and it’s going to be a straight-up blast to play.

Fallout 76 hits Xbox One, PS4, and PC on November 14, but if you’re really keen to get involved, you can pre-order now to access the beta later this month.