This article discusses sexual assault and sex with people under the age of consent, if this might make you feel distressed, uncomfortable or just not great, you might want to give this one a miss.

In a testament to just how different the US‘ defamation laws are to Australia‘s, Guardians of the Galaxy director James Gunn has, for at least the second time, intimated that Jared Leto has made sexual advances towards underage girls.

Gunn made the comment in a tweet today, replying to a tweet from Dylan Sprouse (one of the former stars of Disney‘s The Suite Life of Zack & Cody) that alleged that Leto has been creeping into the DMs of young models: 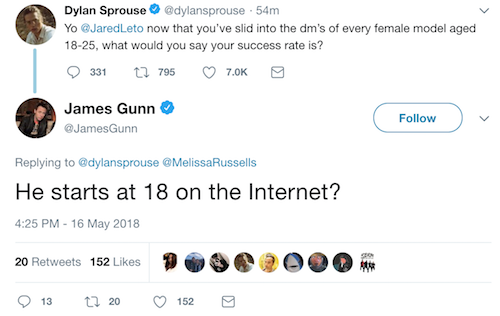 This is not the first time Gunn has said as such; back in June of 2015, the director reportedly did an “Ambien-fueled” live video on Periscope (since deleted) in which he made similar remarks. A contemporaneous article from The Wrap only vaguely says that he “dished details about his sex life and about stars like Jared Leto“, but social media and forum posts from around the time specifically mention Gunn saying that “Jared Leto sleeps with underage girls“.

Gunn deleted the video and apologised in an Instagram post to “all of you around the world who saw my Ambien-fueled Periscope session last night at 3 a.m.“, but didn’t specifically retract any remarks he said about Leto.

A tweet made in 2012 seems to indicate that Gunn has not held a positive opinion of Leto’s conduct for quite some time:

Driving home from Vegas trading stories about what a dick Jared Leto is.

Evangeline Van Houten, a pop culture writer for media criticism site Contemptor, published an article in July of that year titled Another Cosby? A Reminder That Several Women Have Accused Jared Leto Of Sexual Assault, which collected several quite confronting allegations of sexual misconduct from fans of 30 Seconds to Mars. A number of women described having sex with Leto when as young as 15 and a number of the allegations suggest Leto acted despite a lack of consent or continued even when asked to stop – from one account:

He was very pushy into coercing me to do sexual acts with him and he was quite rough and forceful. Once he was unnecessarily rough and when I told him it hurt he didn’t stop – he never did anything slowly or for my pleasure . . . And NO, he never asked me if I was ever ok or comfortable with anything he wanted to do, simply because he is not the person to care.

At time of writing, Gunn has made no further comment and Leto has not responded.

If you would like to talk to a counsellor about rape, sexual assault or domestic violence, give the people over at 1800 RESPECT a call on 1800 737 732.