Is it just me or has The X-Factor Australia been going for 17 or 18 months now? Hopefully tonight will bring out some spectacular performances that will help us shake this X-Factor fatigue. It’s Live Show #7 and the theme is Made In Australia for which the final six acts will perform songs by Australian artists. No shit! The question is, will the judges lean for classic samples from the Aus music canon, or will we be staring down the barrel of an audio shit machine? [Hint: One of tonight’s songs is by a previous X-Factor Australia winner. Groan.]

I’ll be kicking things off right here from between 7:30 and 7:40pm, depending on how far over-time Channel Seven runs Home And Away.

7:33pm: The night has started with high drama, for me personally, because my Channel Seven is not working on the digital set-top box. My tech-competent significant other is trying to auto tune it into the tv right now. It says “852 MHz”. FML…

7:35pm I’M ON. Thought that would be a tragedy and the only thing feeding my updates would be Mel B‘s twitter account. 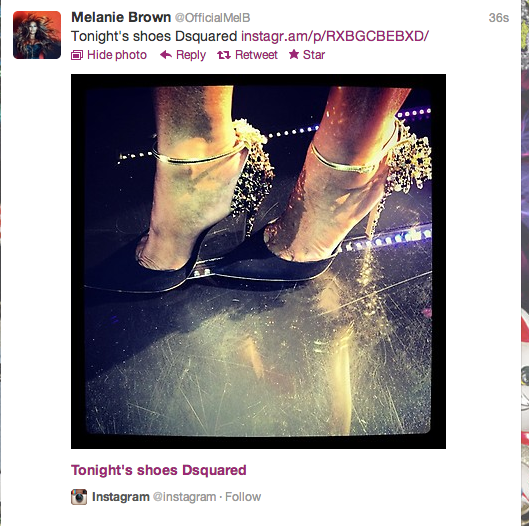 7:42pm: First to sing is Samantha from Team Guy. She’s singing “UFO” by Sneaky Sound System, which is actually the perfect choice for her dance-pop vibe.

7:43pm: Sammy is wearing a nu-rave bodysuit of multi-coloured, fluoro reflector panels with some bronzed cleavage on display (“yew! Boobs!” shouts my boyfriend) and there is a fun laser show going on. This is a really good performance. Her voice sounds fantastic, and it’s a confident, well-delivered performance. Nice job.

7:46pm: All the judges were really excited about Sammy, especially Guy who was being all “I ALWAYS believed in you, Sammy” quite cuttingly after the rest of the judges were saying that she had finally come into her own and had started “shining” (or whatever). No one likes a sanctimonious dick, Guy.

7:51pm: Next to sing is Shiane from Natalie‘s team. She’ll be doing “Shine” by Vanessa Amorosi. Shiane’s probably like “WHO?!?”

7:53pm: So Shiane is sitting on what looks like the basket of a hot air balloon. But it’s sitting stationery on the stage. If it starts floating I will die of happiness from the Wizard Of Oz homage. Shiane doesn’t really look too into this song. Probably because she has no f*cking idea who Vanessa Amorosi is. Which is quite fair enough. I think Natalie chose a slightly too quick version of the song. Do not like.

7:55pm: The judges are obviously losing their nerve because they all gave Shiane a big grin and back pat, saying how good she was. Ugh. I hate it when these shows become a boring love-in.

8:02pm: Time for The Collective from Team Ronan who are singing… a song I’ve never heard of. Before the performance they showed footage of the guy who always wears sleeveless shirts getting upset because of the pressure of the show. Now I feel kind of guilty about the fact I posted a photo of him looking like a tool to the Pedestrian facebook page 🙁

8:04pm: That song was by Timomatic, a previous X-Factor winner. Nat LOVED it and thinks they are as good as Timomatic – and he is SO GOOD! Guy wants them to “do great” but thinks they can definitely do better and that it was pitchy. Mel B “wahsint gettin’ anehthin from them” and didn’t think they connected. Ronan agrees they started off shaky, even though he still thinks they are the best thing in the competition and loves their passion and energy.

8:13pm: We’re back, and it looks like the next person to get on stage is Nathaniel. He’s singing “Red” by Daniel Merriweather. Nathaniel says that if he has to go back to singing weddings he’ll have failed. Chill bro. Weddings need singers too.

8:15pm: Nathaniel is in a deep place tonight, you can tell by the number of time he has made an emotion-induced fist within the first 25 seconds.

8:16pm: His voice sounded pretty and, even though that whole earnest vibe makes me cringe, he can pull it off. Mel B says “yeh took meh somewhere yeh diden tek meh beyfohr” which probably means it’s the first time she hasn’t wanted to bone her husband after one of his songs. Guy says he almost choked up while watching him sing. Wet blanket alert.

8:26pm: Apparently after she was kept in the competition last week and Fourtunate was booted she was getting sent hate tweets from trolls. Jesus Twitter!

8:28pm: Bella starts softly and delicately and her voice is really beautiful tonight. There are faceless mimes wielding suitcases on stage that are terrifying. I can’t watch the screen because that is the stuff of nightmares.

8:29pm: Not looking at the screen ended up being a positive experience because I got to appreciate her voice without the ridonkulous shit on the stage, and Bella really did sound stunning. The judges all agree – they loved the performance, and all (except Mel B the stubborn mole) gave her a standing ovation. All four of them say tonight Bella gave her best live performance yet. I agree wholeheartedly.

8:38pm: Jason is closing the night singing “What’s My Scene” by the Hoodoo Gurus. He has Elvis hair and a tight denim jacket on. Very “cool”.

8:40pm: Jason seems to really have gotten some self-confidence! He’s pulled a few knowing sneers at the camera, and runs across the front row touching the screaming girls. It’s hilarious and ridiculous.

8:42pm: Ronan comments that he doesn’t like the hair and jeans, but he does think that Jason is a delight. Nat says “DID YOU DO A KNEE SLIDE!?!” and Guy points out that Jason has a bleeding knee. (Shout out to Bleeding Knees Club). Jason says “It’s Australia week and we’re tough in this country, mate.” Bless. Mel B says he is just fabulous. They are a pretty weird cute couple, those two.

8:45pm: Jason gives a shout out to his aunties and mum (announcing each of them by name) which is completely charming. His voice isn’t great so music is not his future, but he definitely needs to be on some kind of television chat show.

8:47pm: That’s it for the Live Show. Hit the comment section and give us your thoughts. Who were your favourites and who needs to be shunted tomorrow night? We’ll see you then. Good night all.