It is amazing to contemplate the intangible power of human voices, united. Such is the ethos behind ‘The Protester’ – TIME Magazine‘s choice for Person Of The Year in 2011 which was unveiled today.

TIME defines the title as “who (or what) for better or for worse has done the most to influence the events of the year” which inevitably translates to column inches, headline mentions, social media trends (e.g. #occupy) and whatever the hell people are talking about. Based on that definition, there could hardly be a more suitable choice.

There is no archetypal version of The Protester. Across the world this year we’ve seen people protesting an enormous breadth of issues and beliefs, and doing so in a variety of ways. From the destructive chaos of the London Riots to the various ‘Occupy’ movements protesting against social and economic inequality from Wall Street to Los Angeles, to Ryan Gosling fans protesting People Magazine’s ‘sexiness’ barometer.

In our own backyard The Protester was very much at large throughout the entirety of 2011.

Australian’s started the year protesting the hateful homophobic manifesto of Christian Democrat Party’s Sydney candidate Peter Madden with a Pash Party Protest; later in the year protesters took a stand against Adshel’s decision to pull a condom ad after pressure from an anti-gay group; QANTAS staff protested against the airline’s cost cuts by taking industrial action; and the Occupy Movement made it’s way Down Under with groups taking to the streets to get their message heard.

TIME‘s cover art for the Person Of The Year issue was designed by Shepherd Fairey who created the image using 26 different photographs of real protests from around the world. Fairey told TIME: “These organic protest movements have arisen around the globe and a lot of it was fueled by social media, but it was a pervasive phenomenon,” he said. “It wasn’t one specific movement but general unrest. I wanted to look for ideas to represent that.” 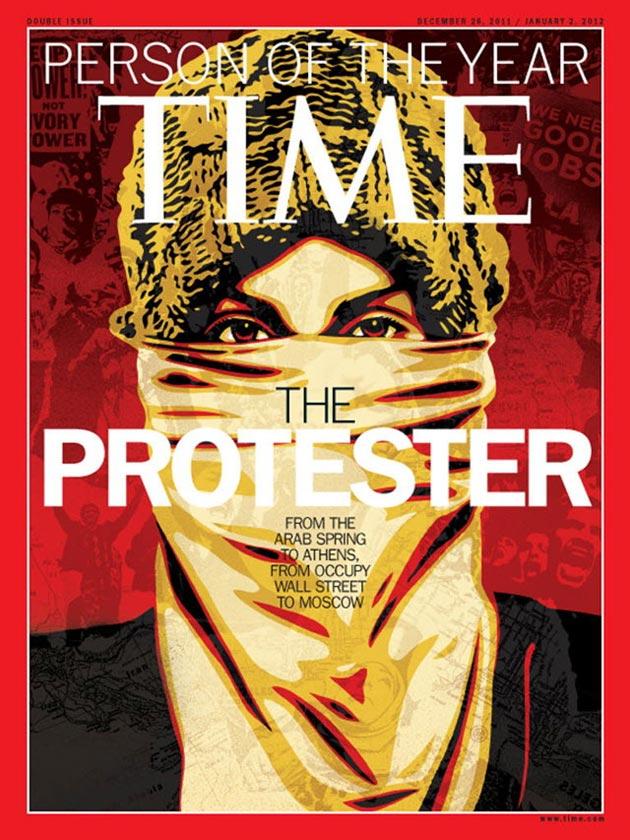