Taylor Swift just announced her ninth studio album, evermore, just five months after the release of folklore, in what has been an absolutely huge year in the 30-year-old’s life.

But in addition to being stoked that we’ve got another Swift album to cry in our cars to, eagle-eyed fans were quick to assert that the album, and the new video are signs that the singer has secretly gotten hitched to long-term boyfriend Joe Alwyn.

Taylor is notorious for leaving Easter eggs around the place, so there *has* to be a deeper meaning here.

So, because it’s Friday and the possibility of Taylor Swift potentially being married will live rent-free in my mind until I have a definitive answer, I decided to do some sleuthing and find every clue we’ve got that the pair are, or are not, married.

I mean, this is the only point I need to make, isn’t it? She is wearing a WEDDING! DRESS!

Specifically, she’s wearing a Zimmermann (Aussie label) Charm Star ruffled silk-organza and guipure lace maxi dress, which retails for $3,566. I highly doubt this would be her actual wedding dress considering it’s an off-the-rack dress, but if you’re a die-hard Swifty, you could totally buy this for your own wedding, just saying.

But regardless of whether or not she wore this to her actual nuptials, this is very clearly a wedding dress and I’m wholeheartedly convinced she’s hinting at it.

Sorry Taylor, but you can’t name your album EVERMORE and not expect me to take that as a sign that you’re secretly married. I mean, c’mon.

Evermore, by definition, means always. I don’t know about you, but that sounds like a fucking *wedding* vow to me.

This could just be a fun, forest-y title to coincide with folklore, but this is Taylor Swift we’re talking about. This woman has a meaning behind ~everything~.

My gut tells me that this was part of her wedding vows. And honestly? ADORABLE.

We already know that the couple are absolutely smitten, but according to Heat, they’re so loved up that they were trying to organise a “quickie wedding ceremony” during COVID.

“They’d planned to hold something in the UK but with the travel ban in place they’ve moved to plan B,” a source close to the couple told Heat earlier this year. “They’re looking at the possibility of holding a Zoom wedding or throwing something intimate and low-key in Nashville.”

If true, this explains the more casual (but still $3000) dress she’s rocking in the Willow video. I’m just speculating here, but does this mean the Willow video could be footage from the wedding? HUGE IF TRUE.

The Lack Of Denial:

If you asked me if I secretly got married, I would straight-up tell you no. If you asked my mum, my friends, my non-existent boyfriend’s friends or literally ANYONE, they would tell you no.

Because that’s what you do when you’ve got nothing to hide. So why did Joe Alwyn’s family just say that they won’t “say anything” when questioned about the theory?

“I’m sorry, I’m not going to say anything,” Joe’s relative told the Daily Mail when asked about the maybe-wedding.

I know, I know, they probably don’t want to publicly speak for Taylor, but if you’ve got nothing to hide, why wouldn’t you just shut down the rumour?

Smells fishy to me.

Taylor and Joe have both shut down engagement rumours, but at this point, I’m convinced she’d do anything to throw us off the trail.

Earlier this year, Swift was spotted with what looks like an engagement ring in her Netflix documentary Miss Americana.

You’d think in the months following the documentary we would’ve had some sort of confirmation but if she didn’t want paparazzi at her wedding, I can totally see her keeping the whole situation under wraps until after they tied the knot.

I’m not saying this is absolute hard evidence, but who the heck wears a big diamond on their wedding finger if they’re not engaged? 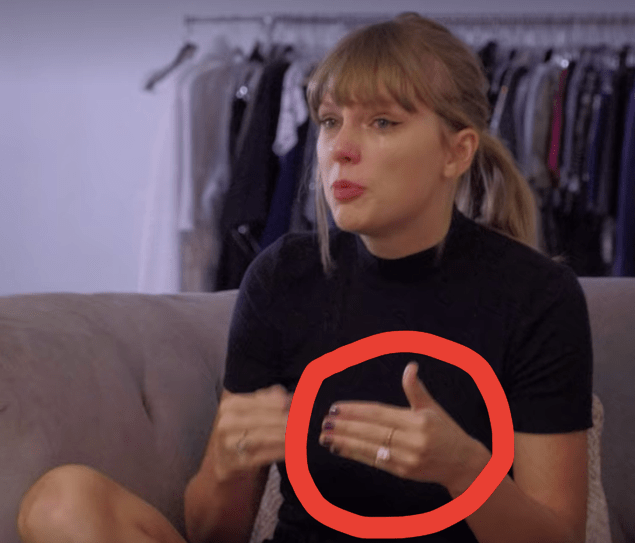 Swift is currently re-recording her entire discography after Scooter Braun refused to let her buy them back. But when it came to re-recording her first hit song Love Story, she changed the lyrics *just* enough to have fans convinced she really did “say yes.”

For as long as the song has been around, the lyric was always “baby just SAY yes.” But in the 2020 version, she has seemingly changed it to “baby just SAID yes” and sure, it’s a minor change that could mean nothing. But again, we’re talking about Taylor Swift, the QUEEN of Easter eggs.

At this point, I’m wholeheartedly convinced that they’ve tied the knot, but I’ll be shocked if we get a wedding announcement in the new album or the Willow video.