More folks who participated in Netflix’s reality television Squid Game spinoff — titled Squid Game: The Challenge — have come forward with shocking stories after it was alleged that several contestants were stretchered off during filming.

According to Daily Mail, “dozens of players have blasted the production,” alleging they were “treated like animals” and made to stand in ice cold temperatures for hours.

“We were tortured for eight hours. We were just fodder. You wouldn’t treat animals like that. I know the show was supposed to be tough but it felt inhumane,” one player told The Sun.

“At one point I could see they were bringing on a black coffin with a pink ribbon just like in the original show. I feel like they prioritised getting a good shot over helping us.”

Another player claimed people were “dropping like flies” due to the cold weather.

A source told the publication: “There were strict rules for players to follow before filming started on the show. The production team discovered two had been sleeping together and had to cut them before it even started.”

Elsewhere, two participants were reportedly kicked off before filming had even commenced for having sex in the hotel they were staying in which is against production rules.

The insider said contestants were not allowed to interact with other players during production. Smoking and drinking alcohol was also prohibited.

Players previously described the situation as a “warzone” while speaking to The Sun.

“There were people arriving thinking they were going to be millionaires but they left in tears,” one said.

“It was like a warzone. People were getting carried out by medics but we couldn’t say anything,” a contestant said.

“If you talk then you’re out. Some people couldn’t move their feet because it was so cold.”

They recounted how someone yelled “medic,” prompting the crew to rush on set. They also explained how they were sometimes standing there for 30 minutes between takes, with some people crawling by the end, presumably because of the cold.

“Even if hypothermia kicked in then people were willing to stay for as long as possible because a lot of money was on the line. Too many were determined not to move so they stood there for far too long,” the source said.

A different contestant said the set even included the creepy doll that made the 2021 series so famous. 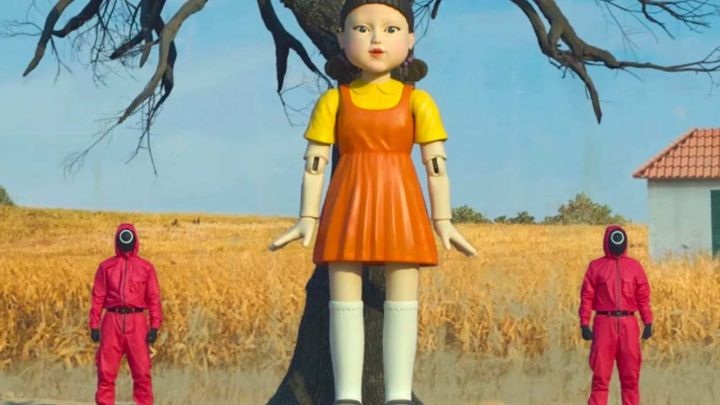 “Everyone was shaking. I don’t think there were any heaters,” the contestant said.

“When the doll starts singing we can move forward. When she stops singing, if we moved we were out.”

“We each had blood vests under [our] clothes which burst automatically if they catch you moving to make it look like you’ve been shot,” the source revealed.

Netflix has denied the reports, insisting that only three people were treated for “mild medical conditions”.

A spokesperson told the BBC that medics were on set at all times and that it had “invested in all the appropriate safety procedures”.

“While it was very cold on set – and participants were prepared for that – any claims of serious injury are untrue,” they said.

The series is being brought to life in Squid Game: The Challenge, which sees 456 IRL people compete in a series of games and challenges to win a huge £3.7 million prize (AUD $6.4 million).

The new series was penned by Netflix VP of Unscripted and Documentary Series Brandon Riegg, who expressed how excited he was to turn “the fictional world into reality in this massive competition and social experiment.”

“Fans of the drama series are in for a fascinating and unpredictable journey as our 456 real-world contestants navigate the biggest competition series ever, full of tension and twists, with the biggest ever cash prize at the end,” he said.

Netflix previously responded to the incident in a statement which read:

“Netflix, Studio Lambert and The Garden takes contributor care as one of its highest priorities and regular toilet breaks, water and food are categorically standard practice on production.

“All contestants were prepared by production several weeks ago that they would be playing a game in cold conditions and participated knowing this.

“All precautions were taken to ensure the game was played safely.”