If you’re familiar with the Relationships and Relationships Advice communities on Reddit, you’ll know that every other post raises far more questions than it answers. One Redditor asking for help has delved into a situation this week which I simply refuse to believe is real. It involves a “sleeping nest” of clothes and it’s either a huge prank or the absolute peak of these subreddits.

The poster (on a throwaway account, understandably) explained how her boyfriend of three years doesn’t have a bed in his apartment, and instead just curls himself up in a big pile of clothes and towels every night, burrowing in under the mess of fabrics like some kind of weird little animal.

My (24 F) boyfriend (25M) sleeps in a "nest" of clothes and towels and refuses to buy a bed. https://t.co/ngeylSwMlW pic.twitter.com/RsKkfTRtCf

Here’s the full text if you don’t wanna click. 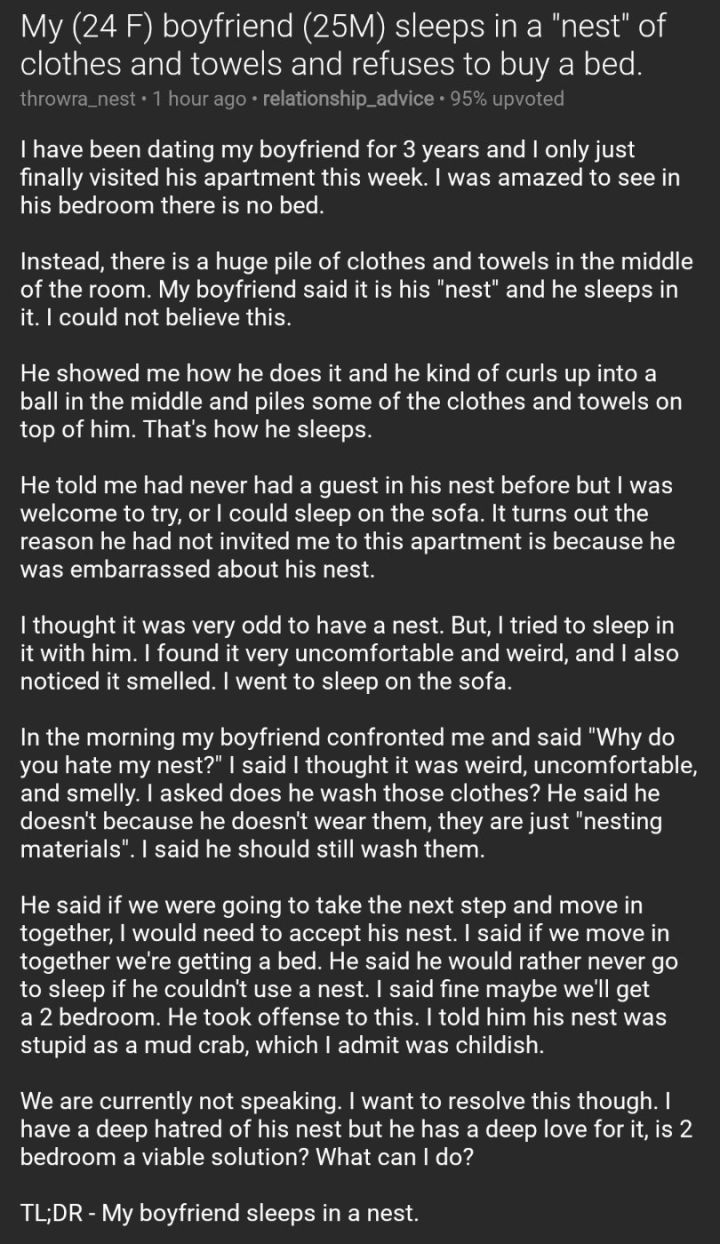 There’s just…so much going on here, Let’s dig right into it, shall we?

The first Big Red Flag for me here is that they’ve been dating for three (3) years and this is the first time she’s been to his apartment. Unless you’ve met online and lived in different cities or something, how on earth is this possible? How has this man successfully managed to not have her in his home in three years? This first point alone screams “this simply cannot be real” to me.

His excuse for not letting her be in his apartment for multiple years is that he was “embarrassed” which I also don’t buy. Sorry, but if you’re embarrassed about your living situation then you’ve got bigger fish to fry there my dude.

He’s obviously not embarrassed about it enough to not get defensive about it when she tells him she’d rather have a bed when (maybe more if) they move in together. So why keep it a secret for so long? The mind, it boggles.

He’s awfully defensive about his nest. Does he have eggs in there?

And he doesn’t even clean the clothes? Who gives a shit if you don’t wear the clothes my dude, have you ever tried to sleep in the middle of a heatwave? Or have a restless sleep? You wake up so sweaty and gross, and your bedding – whatever the fuck it might be – ends up grotty. It’s not like people who sleep in beds don’t wash their sheets because they don’t “wear” them. Hells bells, this is just getting out of hand.

A few people replied to the initial thread, asking if he recreates his nest whenever he sleeps over at her place – a burning question which went entirely unanswered. I need to know. I demand to know if he brings some of his “nesting materials” over to nestle in.

Also how long has he been doing this for? I mean it’s been at least three years, considering the length of their relationship (which I’m still very dubious about.) Is this something he’s been doing for his whole 25 years of life? Is this mans okay? Is his back entirely fucked from spending years sleeping on a pile of clothes and towels on the floor?

Lots of people have made comparisons to Rigby from Regular Show and It’s Always Sunny In Philadelphia, and whether this supposed “boyfriend” is actually just a big bird. Or maybe a rat. Rat boyfriend who sleeps in a big pile of tatty, unwashed clothes.

But we all know in Bird Law, it’s three strikes and you’re out.