With the Melbourne Cup but a few days away, Pedestrian asked the progeny of celebrated racehorse trainer Gai Waterhouse – bookmaker and entrepreneur Tom and style maven and Sun-Herald Fashion Editor Kate – to share some personal advice on the race day rituals of having a punt and donning a dress. No one wants to compromise their mortgage repayments or look like a tool, right?

Firstly though, how does one go about winning a shitload of money? For that we enlisted the services of Tom whose newly launched betting website takes a more personal approach to the art of picking a winner. If there are two horses with odds both under 3.00 for example, Tom suggests betting on the longer priced one. Or if you reckon a horse is worth 3.00 and you see that it’s paying 10.00, don’t alter your bet, put on the same amount. Tom also advises against picking a horse based solely on the way it looks or the way its name sounds (much like picking a mate): “Melbourne Cup is a tricky one for punters because it’s deceptively hard to pick compared to other races. And if you’re only betting once a year you might not be as informed. So to those people I would say this: don’t back a horse based on the way it looks or the way the name sounds. You’ll want to ask questions like can they get the distance? What’s their form been like recently? And who’s their trainer – have they trained a Melbourne Cup winner before?”.

For the big race though, Tom has a clear favourite: “If I was betting in The Melbourne Cup this year, and it’s a very tricky race, I would actually choose Bart Cummings’ horse So You Think which is the best horse in Australia by a million miles. The only thing that holds it back from being a certainty is that it’s never run past 2040m before and The Melbourne Cup is 3200m. So it’s a big query whether or not it can run that far but it’s trained by Bart Cumming whose a legendary 12 time Melbourne Cup winner and if he’s got it in the race he thinks it can win. And if it can run for 3200m it will be a certainty.”

For the other races on the day, Tom thinks the following horses are relatively safe bets: “If you’re going to follow a few horses I’d go with So You Think, which is that horse I think will win the Melbourne Cup, but it’s also running in the Mackinnon on Saturday. I think a horse called Black Caviar is a superstar you’ve got to follow it the whole carnival. Also Hay List, those two horses will be racing against each other but they’re two superstar horses and if you follow either of those horses you’ll be a long way in front. For a horse on Derby Day I think Retrieve has a good chance also. So there’s those four horses to follow but I think my Mum would kill me if I didn’t mention her horse Desperado which won the Caulfield Cup – it’s another good one to keep your eye on. Look out for those five horses throughout the carnival and whenever you see them race put a little money on them and you won’t be too far off.” 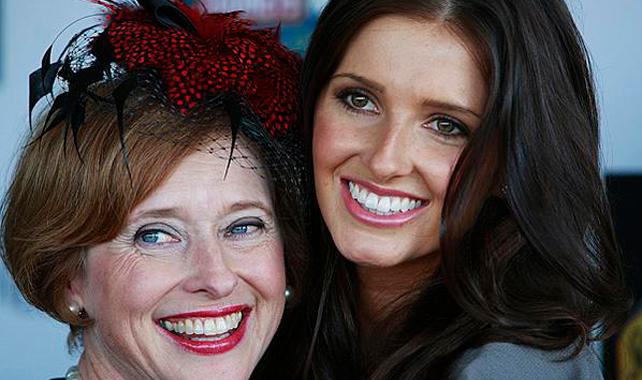 On the fashion side, Kate, who will be wearing Josh Goot and Dion Lee, suggests different outfits for different days. For the typically monochrome Derby Day where it’s harder to stand out amidst the sea of black and white “it’s all about attention to detail, fine tailoring, a great shoe, accessories, necklace, handbag or hat.” Cup Day meanwhile “is all about colour so this year we’re seeing lots of fabulous digital prints and bright hues.” And as Oaks Day is Ladies Day “it’s all about being really feminine and pretty. Expect lots of nude colours, earthy tones, creams and beiges. All those are really in, all your pastels, and of course all your floral prints that never go astray on Ladies Day.”

And where do you stand on hats and fascinantors? “Well I’m all for a hat because I think it really complements the race day outfit, but if hats aren’t your thing don’t try and do it. Do what you feel confident in because you’re not going to have a good time if you’re worrying about what’s on your head all day. And if you feel confident in what you’re wearing your going to look a million times better. So I love a hat but I’m not a really tall person so I like a smaller hat, love the tulle box or beret, because they suit my face a bit better. But if you’re tall and glamorous definitely try and pull of a taller hat. I’m also really into headbands this year especially if you’re not into headwear a headband might be a more comfortable option. A structured headband or even a simple headband with a great bow or feature can really work.”

And wear should hemlines be falling? “Well too long and too short are both inappropriate. It’s not a nightclub, so leave the mini skirts and midriffs at home but it also isn’t a ball so if you come in a long dress it looks ridiculous as well. Anything mid calf to above knee is fine.”

What are some of the common mistakes people make when dressing for race day? “Biggest mistake I think is people mistaking it for a nightclub, so people come head to toe in sequins, mini skirts, midriffs. We know you want to be stylish and fashion forward, but it’s gotta be appropriate for day wear. Something you would wear to a wedding or lunch with your grandma, that kind of thing.”

And on the other end of the spectrum, what should the hapless males out there be wearing? “Well the males have it so easy, they just have to put on a shirt, suit and tie and they’re done, but I think for men the biggest thing is keeping it slimline, fitted shirt, slimline tie, slimline shoes, keep it neat and tidy because if you have a baggy old suit and bulky shoes, its just not a good look, it looks like you’re dressed in your dad’s old suit. Its all about that fitted, slimline look and definitely no white shoes, that is a big no no.”

As far as celebrities go, who gets it right? “Well you know, your Jen Hawkins, your Megan Gales they always get it right. Rebecca Twiggley, she just looks amazing every single time. Emma Freedman she has been going to the races since she was born so she knows exactly what to wear and what suits her. So they’re your race track regulars, they know what to wear and what suits them.”

And the worst dressed celebrity you’ve ever seen? “Probably Paris Hilton, it was a while ago but she turned up in a midriff baring sparkly number. I just looked at her and instantly knew that she hadn’t been to the races many a time. She had it completely wrong.”