MAFS Recap: Everyone Please Go Lie Down After Watching Whatever The Fuck It Was We Just Watched

Alright, we all know what we’re for tonight. I feel like I can safely guarantee something or someone will be smashed.

No surprises here, but Diva feels like shit after acting like… shit. She arrives to Mr Moneybag‘s place and tells him she’ll be softer. They hug it out.

She jokes about throwing his fedora collection out on the street but I wish this was not a joke and instead a service to the public.

READ MORE
MAFS Recap: Diva Is Torn A New One By The Couch Of Ouch Panel, Incl. Expert #4 Princess Bogan

Brent has given Ballarat Paris flowers and a card. “They’re beautiful, but look, the card saying Mrs Vitiello, that’s pretty concerning. That was a lot,” she tells the camera.

Princess Bogan is off it – it being Olivia and Diva and the whole shebang of the commitment ceremony. Olivia reckons “Dom and Jack are so full of shit” and she likens Princess Bogan to a yapping chihuahua.

Bebe Al is pondering the night that was in his chipped Malaga Wine fingernails.

He tells Sam that he can’t get as deep as he was like because she “gets moody”. He says he doesn’t want to get on her bad side and she laughs before saying sorry for laughing.

He’s getting fired up now and says she has a temper. She says she’s “not aggressive” but she’s “passionate”. She tells Bebe Al he’s a joke before skedaddling out of the hotel room.

Matt thinks he’s woken up in “an igloo” because of the “frosty environment” he’s experiencing with Kate. She is confused that he didn’t back her up after she’s treated him like the plague. Kate is praying Matt fucks up this week so she looks better than she does while sleepwalking her way through this experiment.

@badgalella is feeling much better about her relationship with Baby Seal after he finally comprehended that he’s on a TV show. They kiss while fully clothed which is a step in the right direction, I guess.

Diva has slipped into a bodycon to go and “explore” Daniel and see where the night takes them.

He’s gotten the margs which is basically code for live laugh fucc. She asks why his buttons aren’t done all the way up. He says he’s trying to get naked “slowly but surely”. That is so fucking forward I can’t even.

He fully goes in for the pash and she gives him the cheek because she wants to wait a little longer before cheating on her husband.

She assures him approx. 5 times that she wants to kiss him and tells the cameras that Daniel is “hot as fuck”.

The producers do all of this while intercepting the footage with Mr Moneybags talking about how hopeful he is. Assholes.

The couples are getting ready for a couples retreat away and HOLD MY POODLE.

Selina and Cody pack their lube.

Diva jokes about drowning Princess Bogan in the pool.

Looks like Princess Bogan and Nice Guy and Ballarat Paris and Brent have found the same room that Melissa and Bryce found to hide in last season.

Ballarat Paris thinks she is a mindreader because she can tell that Princess Bogan despises Olivia.

Olivia says it will be hard to hold back if Princess Bogan comes for her during the retreat. Olivia, hold back. Please hold back. Is there anybody out there, feeling something?

Princess Bogan is talking to the girls about Nice Guy while he is a bee’s dick’s distance away. She’s complaining about the lack of sex (it’s been two weeks!!!) and that he doesn’t make her feel sexy. He hears everything.

This is WILD to me, a person who scans the room 17 times before talking about partners – past, present and future.

Nice Guy feels “like shit”. Fuck this. I feel so bad for him. “It’s just a real shit way to find out,” Nice Guy says.

All the boys heard too. So horrible. He’s wigging. How not fun to hear that. Poor Guy. Shall we rename him? CBF.

Brent tells Princess Bogan that Nice Guy could hear every word of the conversation that she carelessly had with her friends and dickheads she doesn’t want to make friends with. Brent confirms everyone else heard it too and that her voice is “a little loud”.

She knows full-well she’s done the wrong thing. She’s disappointed in herself and is holding back her tears by stabbing her eyes with her fingers.

Nice Guy retreats at the retreat to think about the public humiliation he’s currently experiencing. He reflects on the time she also told everyone he didn’t flush his shits and is sensing a pattern.

Princess Bogan pulls him to the side. She says she really didn’t think he would hear. He uses the opportunity to discuss what it is that made her say these things in the first place and what a guy. Very Nice Guy. Commendable Guy.

He tells her to fuck off.

She gets angry that he told her to fuck off while she proceeds to fuck right off.

Diva couldn’t give two fucks because she thinks Princess Bogan is a “toxic person”. Olivia says Princess Bogan “carries on like a pork chop” while getting ready in her presumably fake Burberry dress.

OK WHY NOW ARE THEY SHOWING OLIVIA’S DEMONIC SIDE FROM THE INTRO INTERVIEWS?

Olivia said that she told her friend, who was getting married, that she didn’t like the brown bridesmaid dress she had to wear because it made her look “like a poo”. She was then fired from bridesmaid duties and sent the dress back to the bride – all cut up with the kitchen scissors.

“I can be bitchy. I can be awful, at times,” Olivia confirms.

We’ve all been fucking played.

The boys are playing dress-ups in Mr Moneybags’ room which is very much 5am bender behaviour.

They’re all piling down in Mr Moneybags’ assortment of fedoras and this is literally my worst nightmare.

Boiz Night has commenced. Jackson tells Nice Guy that he thinks Princess Bogan’s behaviour is a symptom of self-sabotage. Rich coming from a man who thinks doing three buttons is anything other than self-sabotage.

Galz Night has also commenced. Olivia tells the room she had “the most intense orgasm” this arvo. She “legit blacked out”, you guys.

Princess Bogan thinks this a calculated attack on her and I couldn’t agree more to be honest. That being said, I do feel personally attacked any time someone brings up as orgasm with me in a room, let alone one that makes you blind.

Meanwhile, Babe Al is manifesting his own knock-out orgasms by worming around in Mr Moneybags’ Adidas suit.

Bebe Al tries to embark on another mediocre striptease and Mr Moneybags saves his tracksuit from death by fire.

Bebe Al proceeds to jump in the lake as he can fully unleash when Sam’s not monitoring his growth or depth.

But Galz Night is more tense.

Someone has brought up the beef between Diva and Princess Bogan. Princess Bogan explains that she sees the commitment ceremony as a forum and that she wouldn’t expect Diva’s behaviour to be like that as a 30-something.

Diva tells the cameras that Princess Bogan is “a psycho” who “needs help”.

Olivia appears to have recovered from her earth-shattering orgasm and is prepping herself for her own Princess Bogan takedown.

Diva sasses her with these lines: 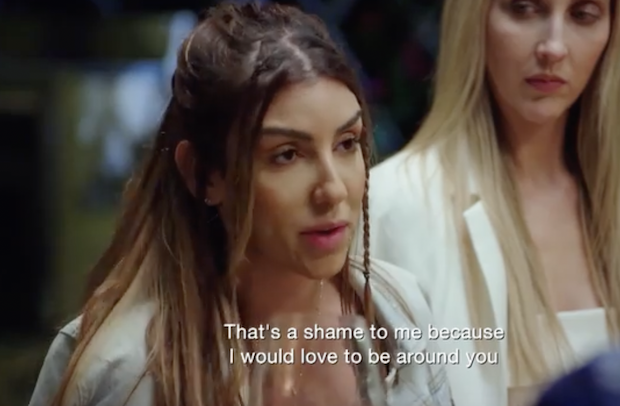 Ballarat Paris and Princess Bogan are confused as to whether or not Diva is being sarcastic, which is confusing in and of itself. 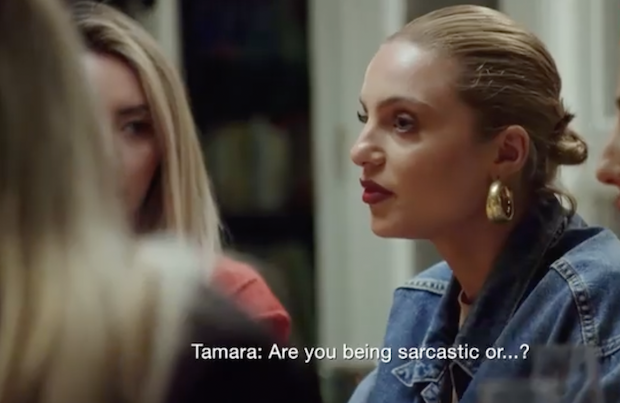 Olivia chimes in because she is an evil wind chime who will take any opportunity to disrupt. “Jackson and I had a thought. If you two went at it, it would kind of be like a great white shark and a crocodile.”

Olivia then tells Princess Bogan to choose her words carefully, yet again.

“I really hate being told, ‘Choose my words wisely.’ Guess what? I’ll choose my words, because they are my words,” Princess Bogan bites back.

Olivia then reminds everyone of what happened at the commitment ceremony, as if none of them were there.

“You know what, Dom? I’m sick of hearing you yell, all the fucking time!”

“I’m sick of your voice yelling, all the fucking time! I’m bored of your fucking voice! I’m fucking bored!”

Olivia is just yelling left right and centre now. The irony of her yelling over Princess Bogan yelling is not lost on me.

“It’s not a nice way to speak to people!” she tells Princess Bogan, while speaking not nicely to her.

She proceeds to do this lil’ death-stare head-shimmy that says “suck on that” like she’s in the third grade.

“Apparently not!” yells Olivia, with her voice. She drinks her wine like she’s just rorted her husband out of his inheritance.

“That’s a nice voice. Why can’t you just speak like that to people?” Olivia asks her.

“Is she fucking serious?”

Da Galz try and diffuse the situation. Princess Bogan cuts them off.

My entire fucking life, I’ve been fucking told that my voice –”

THE GLASS HAS SMASHED, PEOPLE.

The cheese board is ruined. Glassy camembert is not a vibe.

Princess Bogan is out of her seat and leaning over Olivia.

“You are screaming at me and telling me that my voice isn’t enough!”

Diva is asking her why she would stand up over Olivia like that.

“You know why? Because she’s having a fucking go at my voice!” Princess Bogan tells Diva.

We can hear the tears forming now. “It’s literally how I talk!” Princess Bogan cries. “You’re telling me, that the way I speak, is wrong? Do you know how that comes off?”

Kate has woken up from her conscious slumber for the occasion. Diva jumps in. “You know what? I’m sitting right in front of you and you break a glass because you can’t control your temper!!!”

“Because you’re not aggressive at all…” Olivia swipes.

Ballarat Paris thinks everyone needs to take a break.

Princess Bogan walks away and asks that no one follows her. “Leave me alone! I’ve had enough today! This is too much, I’m sorry. Who does that?”

I hate to say it, but I just cried a bit for her. It’s blatantly fucking obvious that being told these things about her voice is a trigger for her, made even worse by what happened with Nice Guy earlier that day.

Smashing a glass is really fucking dangerous, though.

“I did my best, to dish out to her what she dishes out to every body else,” Olivia tells the cameras.  “And I think the proof is in the pudding that she just can’t take it.”

THAT WAS A FUCKING LOT.

Now I’m off to chop up my recent Depop purchase and send it back to the seller.

Chantelle Schmidt is a freelance writer. You can tell her how much you hate these recaps on IG here.