MAFS Recap: Our New Heterosexual Couples Present Zero Hope That This Experiment Will Get Better

MAFS Australia is back tonight and the producers have sent in some carrier pigeons to deliver our new heterosexuals.

We kick things off with Princess Bogan and Nice Guy comparing themselves to the shittier couples in the experiment and they’re feeling damn smug about it.

Bebe Al and Sam are recovering after Sam continues to change the goal posts. But now they’ve had sex! Sam says it was a “natural and organic progression”.

Ballarat Paris and Brent are avoiding calling each other cunts. Ballarat Paris tells Brent she’s willing to put the cunt-calling in the past, and Brent agrees to try and make things work. They hug without any risk of their feet touching.

The MAFS experts are now matching new tributes together. First up is 38-year-old Kate and 39-year old Matt.

Kate has never been in love or had a boyfriend and Matt has been in a seven-year marriage.

Kate feels like she’s “failed at life” because her friends are married with kids, even though she is a successful clinical nutritionist. She lives with her twin sister where they eat Lean Cuisine meals on the couch.

Kate’s dream man is someone kind, trustworthy and who gives her hugs.

Matt wants to be a dad. He’s been through IVF with his ex and has been a foster parent for four years in respite and emergency care. He’s ready for his second chance at love. He watches The Notebook and cries because he wants his own Rachel McAdams.

He really wants to start a family and I feel like Holly was robbed if this seemingly normal guy was always on the cards.

Next couple carefully selected by our MAFS experts is Carolina and Dion who are both workhorses.

Carolina is from Brazil, her dad died before she was born and she has a 16-year-old son. She hires out designer handbags and is very independent and financially stable.

Her husband-to-be Dion in clearly loaded and loves his car and clothes and watches. Oh right, of course he is in real estate. At the moment him and his dad are building a skyscraper.

He wants to have kids to fill the rooms and be a cool “hip” daddy, which is lucky given he’s about to inherit a 16-year-old.

The existing couples get their wedding invites and start getting ready for the big day, but Sam is not allowing Al to do his top button up.

Dion is preparing and reckons he looks like he’s “jumped out of a Tom Ford showbag”.

He is too confident for a) my liking and b) his current existence.

Carolina is stressing about her eyelashes and considers herself “a lot”. Her friend agrees. Carolina hates her makeup and has no trepidation in telling the makeup artist that – right to her face.

Carolina asks if she can do the makeup herself even though people are already arriving at her wedding.

Carolina and Dion’s wedding guests ask if the existing MAFS couples are “extras” and fuck, someone pick their egos up from the floor.

I’m not big on cars but I know Dion has rocked up in an expensive one. Carolina is very late and Dion’s friend, Ellie, is trying not to wet her pants.

Al is hitting on Carolina’s bridesmaids who are on time.

Carolina is now over an hour late and Dion’s mate Ellie is annoyed that she could’ve pissed twice by now.

Over at Kate’s wedding, she says she’s been called ugly in the past and I’d love to know who has the audacity to say this shit to someone. She’s been getting botox and fillers and says she still doesn’t feel good enough.

Kate really hopes her husband tells her she looks beautiful. Matt turns around and bites his lip which is a very good sign he likes his new Rachel McAdams.

He tells her she looks beautiful which is what she wanted. She tells him thank you three times.

He says “beautiful” three-to-four more times throughout their vows and he is very happy. He is lost in her eyes. Great! Great, right?

Kate says he is “nice” but “physically” he is not what she would “usually go for”. I think he’s alright? They peck. She’s not feeling it.

Well, this is a bloody spanner, innit.

Back at Carolina’s wedding which she has still not turned up to, everyone’s now been waiting three hours for the thing to get started. That’s a lot of urination that could’ve been had.

Carolina does not feel guilty about her lack of punctuality, but our Pissing Ellie would like a snack after waiting for so long. Did Dion really stand upright this entire time?

Carolina asks how tall her husband is. He’s 5’7″ which to her is “pretty short”. He says when he stands on his wallet he is 10-foot tall. I think I just choked on my own vomit.

Kate is trying to hold her own vomit while kissing her new husband, Matt, during the photoshoot.

Meanwhile he is licking his lips and roaring for more.

Shit’s getting weird now. He’s asked her to come closer and she looks like she is trying to possess him with a spirit that is not his own.

The photographer asks Kate to sit on Matt’s lap to which he says, “A bit like I’m Santa!” I do quite like him but that’s some serious creepy uncle vibes.

He keeps calling her “darling” and “babe” and she’s worried he is being too touchy considering she doesn’t even like him.

Matt says he is very “passionate”, “touchy” and loves a “good kiss”, “good massage” and “a good sex”.

Kate tells the cameras he need to slow the fuck down. He tells Kate he is sorry about his breath because he just had some chicken Twisties. What creative product placement! I feel like I would be into the flavour but not the proximity of the face. 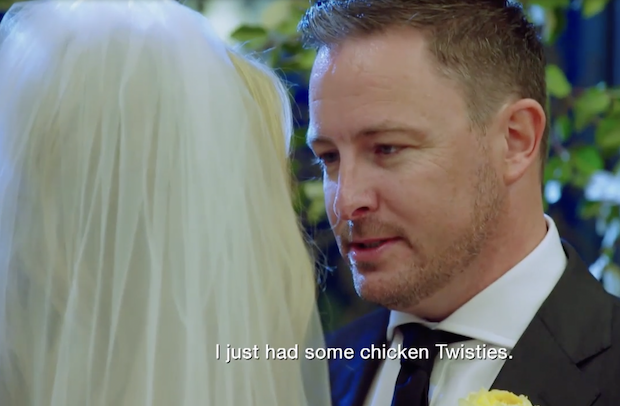 Carolina knows now that Dion is patient after she made him wait for her at the altar for three hours. She says she is a bit of a diva, and we have a new nickname people.

Dion asks Diva what her business is and now she can leave the experiment because she’s plugged it for the masses.

Diva likes that Dion has “his shit together”. Al thinks they are good match “looks-wise, yeah”.

Carolina has a Pomeranian princess named Lola, but tells Dion that her friends are looking after her when clearly it’s her 16-year-old son. Pissing Ellie has pissed heaps now and decides her bestie needs to know about Carolina’s teenage child.

Kate says Matt is ticking all of the boxes except for the one where she needs to like him back. She’s questioning why she doesn’t like him.

Princess Bogan is now preparing Kate and Matt for their impending doom, saying that Jack doesn’t flush the toilet to illustrate her point. He’s clearly pissed off and confirms her making fun of him is “too much”.

Kate is starting to like Matt after finding out he has provided foster care to 27 kids. Dion and Al hug in the most predictable bond ever.

Diva is still hung up on Dion’s height, saying her teenage son is taller than him.

Pissing Ellie has decided to bring up Diva’s son with her. Diva tells Pissing Ellie that she’s not sure if it’s a tonight conversation.

Naturally, Pissing Ellie hints that she knows some shit to Dion. Her and his other friend Rob try and tell Dion off camera. It’s a dumb move because there’s no way in hell producers would let that happen.

Matt tells Kate his love language is physical affection. Kate says hers isn’t. He says he’s happy and she says she is “ok”.

She tells him to stop touching her so much and that they can work towards it instead. He says she is an onion. She says, “That’s good feedback.”

Dion takes Diva aside to find out what Pissing Ellie is on about. He’s baiting Diva but she’s not biting. Oh, she tells him!

He was not prepared for the teenager bomb. He thinks about whether or not it is a dealbreaker for him, but tells her she should be proud of herself. He tells the cameras he still wants to give it a crack but he needs to “come to grips” with it.

Princess Bogan is now saying Nice Guy hasn’t made him coffee. Of course Olivia decides it’s a good time to tell them that Jackson makes her coffee. We get it, Olivia.

Nice Guy tells Princess Bogan that her little digs about coffee and toilet-flushing are making him feel like she’s not proud of him. He’s very mature, honest and calm about communicating this to her.

It seems as if she’s registering and feels bad, until she tells him: “You know what, Jack? It’s been really fucking hard.”

This is an interesting change of pace after weeks of telling him, “It’s not that fucking hard.”

Oh dear. She says they need to be compassionate towards one another and yeah, that’s what he’s trying to ask of you doll. He tells her that talking to her is like talking to a brick wall.

“I’m just going to sit here and not open my mouth for the rest of the night,” Princess Bogan protests.

Olivia asks if they’re OK. I do not believe Olivia cares as much about the state of their relationship as much as she cares about another opportunity to tell everyone how great Jackson is.

Now Jack tells the table that he doesn’t feel like Princess Bogan is stoked to be with him. Sorry, I do feel like this public airing is what upset him in the first place?

He wants to stay on his own tonight. Princess Bogan says she’s “sorry, but…”

Olivia tells her that any apology with a “but” at the end isn’t an apology but “It’s an excuse”. Olivia, learn to stay in your own lane. You are not the voice of reason just because you and Jackson haven’t argued yet.

Tomorrow night we have another wedding and sigh, it’s more heterosexuals.

Chantelle Schmidt is a freelance writer. You can tell her how much you hate these recaps on IG here.