A Bunch Of Christmas TV Episodes, Ranked By How Delightfully Corny They Are

The silly season has arrived along with all the wonderful Christmas traditions like scoffing mince pies and eggnog, office secret santa and Mariah Carey on repeat.

But if these much-loved Chrissy customs aren’t enough to get you in the spirit of the season, how about turning to some of the greatest (read: corniest) Christmas-themed TV episodes of all time.

Here, we’ve ranked all the most delightfully corny Christmas episodes to ever grace our screens, ranked by how cheesy they are.

Have yourself a corny little Christmas and watch as many of these eps on Stan as you can before December 25. 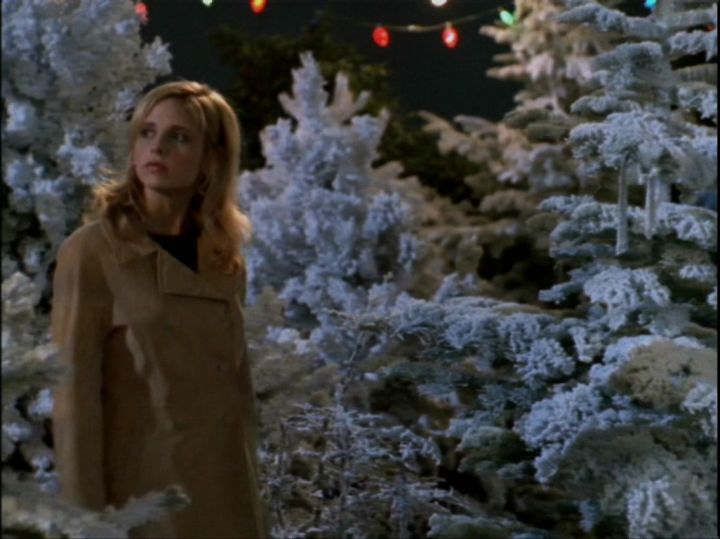 Die-hard Buffy the Vampire Slayer fans will probz be bearing their fangs at me right now ‘coz this episode is dark as hell and therefore seemingly not corny at all.

But while this fact has earned the ep a spot at the bottom of the list due to reasonably low corn-factor, there’s definitely an undertone of cheesiness in it and I’ll explain why.

For the non-die-hards, the episode sees Angel (David Boreanaz), AKA the vampire with a soul, haunted by the ghosts of his victims he’s bumped off during decades of evilness before turning to the side of good.

The plot is an obvs play on the Ghost of Christmas Past from Charles Dickens’ iconic Chrissy yarn A Christmas Carol, which gives the ep instant corny points.

Plus there’s heaps of cute festive imagery that you wouldn’t normally find in the gloomy Sunnydale, such as this shot of our feisty teenage slayer and her vampire BF looking like they’re about to have a smooch under the mistletoe. 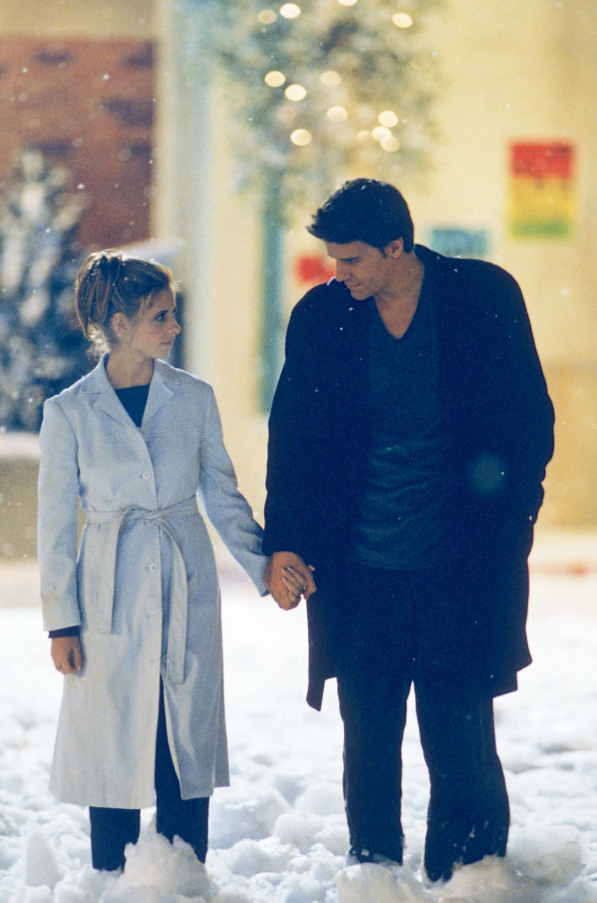 5. Grey’s Anatomy – Grandma Got Run Over By a Reindeer 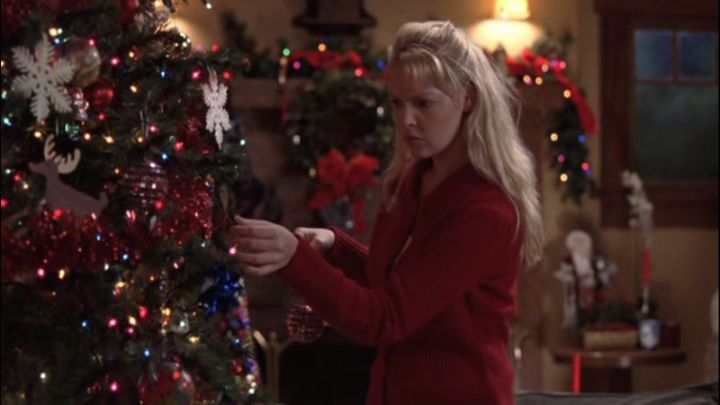 Ok so let’s start with the fact that the episode was named after a novelty Christmas song from the ’70s by husband-and-wife duo Elmo and Patsy Trigg Shropshire, so there’s some immediate corn for ya.

In this season 2 episode of your fave doctor drama, Izzie (Katherine Heigl) is tasked with tending to a man who falls from his roof while hanging Christmas decorations.

Meanwhile, the typically steely Cristina Yang (Sandra Oh) shows her rare sensitive side as she cares for a depressed boy who needs a heart transplant.

And George (T. R. Knight) is forced to deal with the grumpy family of his patient and as we all know, it wouldn’t be Christmas without a bickering fam.

Special shoutout to the opening scene where Izzie goes overboard on the Chrissy decorations, much to George and Meredith’s (Ellen Pompeo) annoyance.

There’s one in every household!

The Will & Grace gang find themselves in a right Christmas pickle in the season 4 episode, Jingle Balls.

Will (Eric McCormack) is dating a sprightly dancer who he’s low-key embarrassed to be seen with. When Grace (Debra Messing) asks to meet her bestie’s new boy, Will does what he can to stop it from happening for fear of judgement.

But trouble ensues when Grace goes behind his back and meets him anyway, leading to an unexpected outcome.

Meanwhile Jack (Sean Hayes) has been enlisted by his manager at Barney’s to decorate the store window for the holidays.

Rather than seeking the assistance of Grace, an actual designer, he instead seeks Karen’s (Megan Mullally) counsel and you can only imagine how that goes.

There are a few heaps corny moments throughout the ep, including Grace managing to convince Jack that Santa Claus is real. 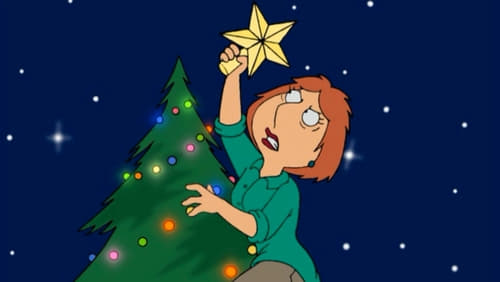 While Buffy and Grey’s defs have funny scenes and moments of whimsy, the festive season is all about having a good chuckle which makes this epic Family Guy ep a must-watch.

I’ve popped this one smack bang in the middle of the list ‘coz it features a bunch of corny Christmas tropes in a cheeky Family Guy way.

As you can ascertain from the above image, Christmas has Lois (Alex Borstein) feeling super frazzled as she tries to get the Griffin household ready for the big occasion. 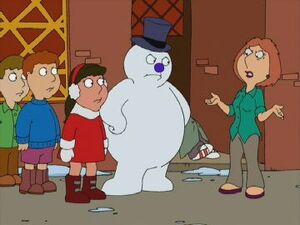 Naturally, a bunch of mishaps lead to utter panic, such as Peter (Seth MacFarlane) accidentally giving all the family’s gifts away to charity and Brian (MacFarlane) setting the house on fire.

Oh, and did we mention Stewie (MacFarlane), the demonic baby, gets cast as Jesus in the town’s nativity play?

Yep, it’s got the abject chaos of a typical Family Guy episode, only covered in tinsel and Christmas-themed gags.

2. How I Met Your Mother – How Lily Stole Christmas 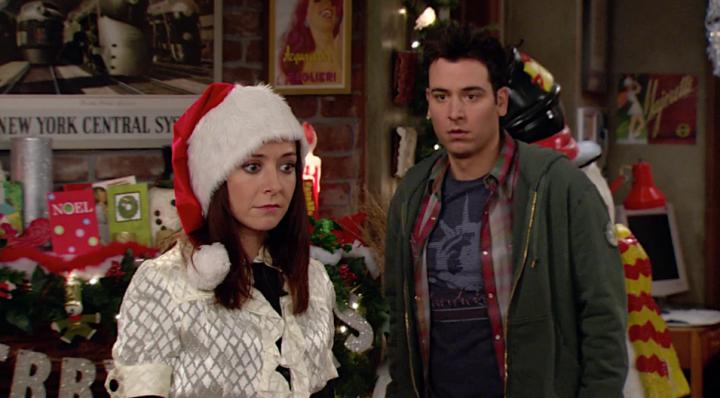 How I Met Your Mother’s Chrissy ep starts off all cheerful, with Lily (Alyson Hannigan) getting everyone into the spirit of the season, but quickly takes a sour turn.

Lily finds her old answering machine that was unplugged during the summer she was away and after plugging it back in, hears a message from Ted (Josh Radnor) to Marshall (Jason Segel) where he badmouths her.

The episode perfectly captures the essence of Christmas: spending too much time with loved ones, leading to beef which (hopefully) gets resolved before the holidays are over.

And while this is happening, we treat ourselves to an overflow of booze and tasty treats. 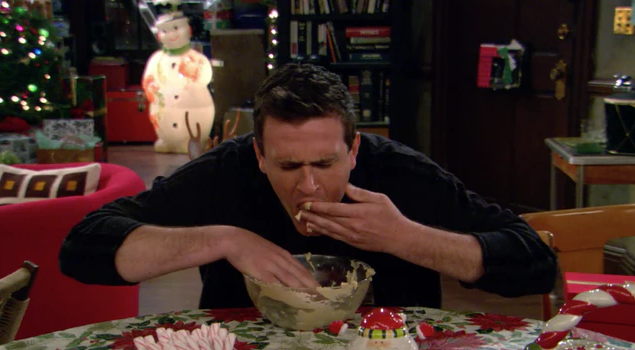 The episode is steeped in corniness, from the lame ass greeting cards to Lily and Marshall’s Christmas cheer to the group showing up outside Ted’s family home, pretending to be carollers singing ‘Silent Night.’

It was something straight out of Love Actually.

1. Friends – The One Where Rachel Quits 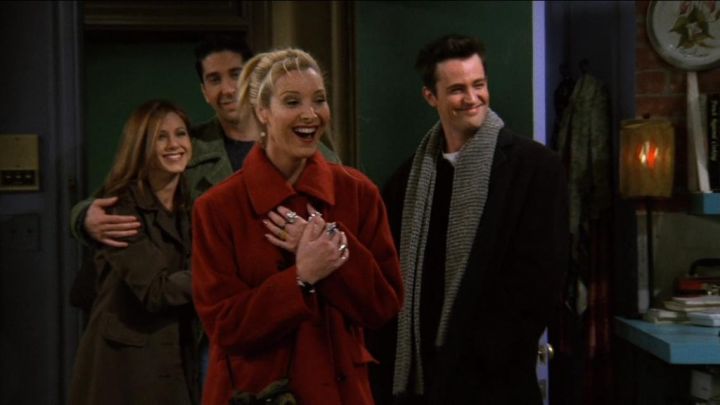 Literally no series in the history of television has been able to nail holiday episodes quite like Friends.

Whether it’s Christmas, New Year’s, Halloween or Thanksgiving (yes, I included that last one even though we live in Australia ‘coz I never want to be an American more than when I watch Friends Thanksgiving eps), the six pals always have a way of putting us in the holiday spirit.

The One Where Rachel Quits is by far the corniest Christmas episode of all 10 seasons of Friends, IMO, and I’ll tell ya why.

Joey (Matt LeBlanc) gets a job at a Christmas tree farm which leads to a conflict with Phoebe (Lisa Kudrow) as she feels sorry for the less attractive trees that don’t get sold.

Phoebe’s determination to save the neglected trees is just too bloody pure and sweet, not to mention Joey and Monica’s (Courteney Cox) plan to help their friend in her quest.

The episode ends with a Christmas miracle, resulting in Phoebe enthusiastically reciting a quote spoken by Tiny Tim in the aforementioned A Christmas Carol, “God bless us, every one.”

All of the above episodes are now streaming on Stan along with many, many more including some Christmas gold from the Will & Grace revival, a cartoon Community spesh and the iconic Seinfeld Festivus episode.