In case ya missed the memo, the sadistic bastards at Seven will air pandemic flick Contagion tonight at 8:30.

Chances are you’re reading this midway through watching the film and you’re wondering how accurate it is.

The folks over at Bustle interviewed three medical professionals and had them weigh in on the likelihood of the events of the film happening IRL.

Dr. Paul A. Offit, M.D., professor of vaccinology at the University of Pennsylvania, told the site that while what’s depicted in the flick is “your worst-case scenario,” there are a lot of elements that ring true (and some that are pure Hollywood crap).

Here, we’ve separated the fact from the fiction and it turns out there’s more of the former than the latter.

Fact: Medical professionals have been “concerned” about a viral flu for some time 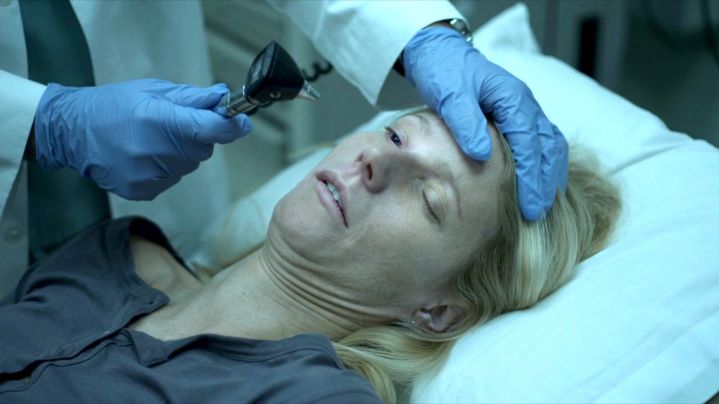 “For years, infectious disease epidemiologists have been very concerned about the possibility of a flu that is not only easily transmitted from human to human but has a high mortality rate,” said Dr. Christiana Coyle, M.D., professor of epidemiology at New York University.

“Fortunately, most flu viruses are easily transmitted but have relatively low mortality rates.”

[SPOILER ALERT] At the end of the flick, we see the chain of events that led to the virus’ creation: a tree is bulldozed, displacing a bat. The bat flies over a pigsty and drops a piece of banana from its mouth. A pig eats the piece of banana, ingesting the bat virus. The pig is later slaughtered and prepared by a chef, who doesn’t wash his hands in between touching the carcass and shaking hands with Gwyneth Paltrow’s character — which is how Beth becomes patient zero.

What happens in this sequence is known as a “spillover event,” when a pathogen moves from one species to another. Once it’s jumped into an unfamiliar host, it may mutate and become deadly.

Rather than going directly from a bat or bird into a human, most viruses need a “bridge host” to act as a go-between — which, in the case of this flick, is a pig.

“Once it’s in the bridge host, it usually just takes a couple of mutations in the virus to make it transmissible to humans,” Coyle explains. Just like in Contagion, the novel coronavirus (COVID-19) is most likely the result of a spillover event but the bridge species isn’t yet confirmed, although it’s been reported as the pangolin.

Fiction: The vaccination can be crafted in months

In the flick, the vaccine is created and distributed in mere months. Offit says this is “ridiculously fast.”

“This is a novel virus where you’re starting from scratch, and I think they did it in a few months in the movie, which is ridiculously fast,” notes Offit, who co-invented a rotavirus vaccine that took 26 years of work.

Fact: It’ll take a few fuck-ups before they find an effective vaccine 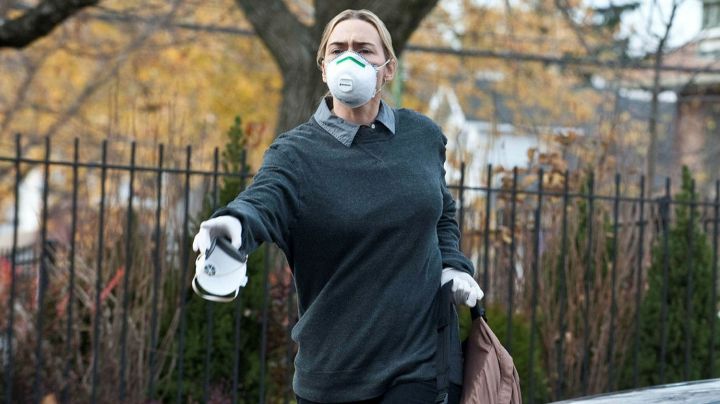 The reason why the government is insisting that folks be patient in waiting for a vaccine is because even when they do create one, they won’t know if they’ve gotten it right immediately.

In fact, it will likely take a lot of screw-ups before they find one that fully cures the disease, just like in the film.

“They didn’t get it on the first try. Far from it,” Offit says. “You see them make something they think is a vaccine, give it to monkeys, and then you see scene[s] where they’re taking dead monkeys and putting them into plastic bags, [because] it’s not working. That’s an accurate message, that you’ll encounter a lot of failure before success with making vaccines.” 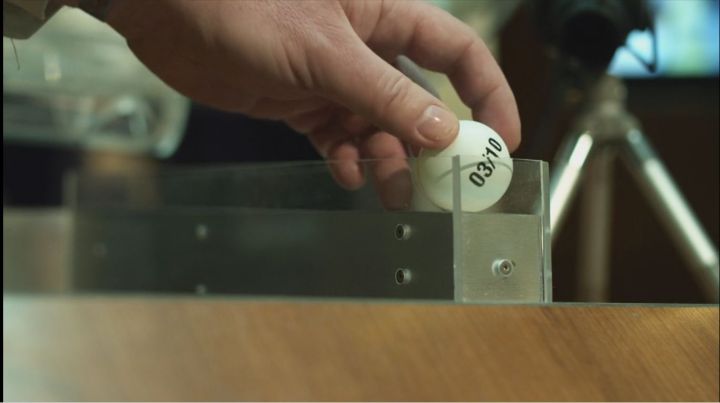 In the flick, the vaccines are handed out based on a randomised lottery system using birthdays, which would never happen.

“There is a question of production capacity, assuming you need 300 million doses for every person in the U.S.,” says Coyle.

“So yes, if we had limited production there would have to be some sort of rationing, but I don’t think it would be birthdays, I think we would do health care providers and first responders initially, and then we would kind of go out in waves from there.”

Remember when Kate Winslet’s character said the average person touches their face 2,000 to 3,000 times per day?

Well according to studies, the actual number is closer to 15 to 23 times per hour.

That’s still an awful lot of face-touching, though.

Fact: The virus is easily transmitted through touch 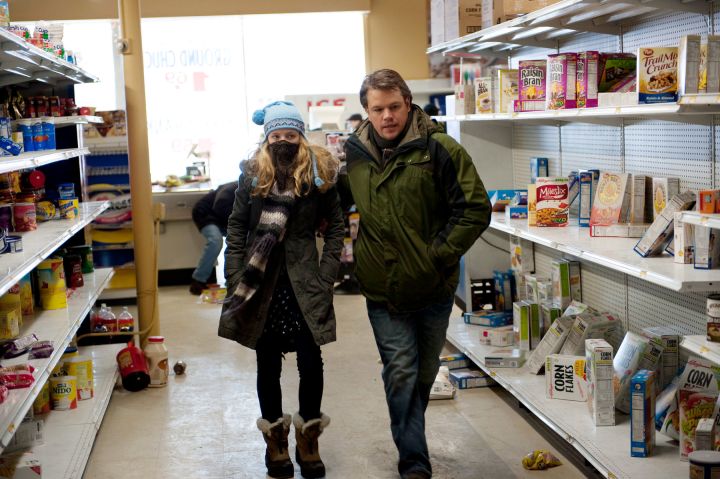 Huang says Contagion does a great job of highlighting the danger of touch, particularly of potential fomites — objects or materials that come in contact with an infected person and later transmit the virus. For example, the casino scene where Paltrow’s character unknowingly infects multiple people by way of her credit card, an empty cocktail glass, and a casino token.

“That was extraordinarily well done, to give you the sense of how a virus like this can be transmitted from one person to another with the most casual contact, with fomites,” says Huang.

Hence why we should all be washing our hands, and avoiding touching our eyes, nose, and mouth.

Fact: Medical professionals are faced with the moral / ethical dilemma of whether or not to warn loved ones about emergencies 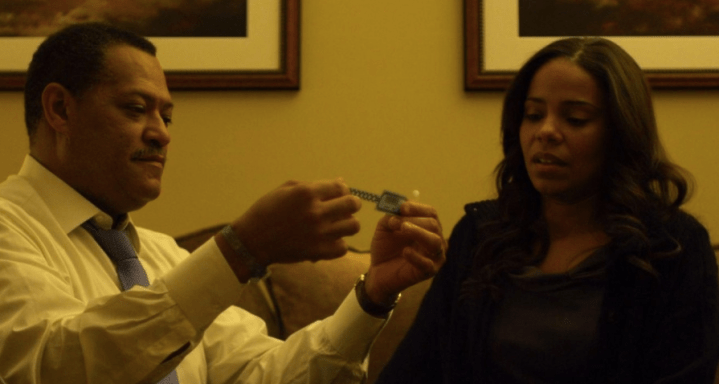 In the movie, CDC employee Dr. Cheever (Laurence Fishburne) gets in deep shit for secretly informing his wife that the epidemic is about to get serious in their hometown, and tells her to get the heck out of dodge.

According to Coyle, this conflict has come up before.

“That felt absolutely familiar to me,” she says. “It’s been years since I worked with CDC, but we did have a situation that could have developed into something more serious and did not, and we did have employees who were reprimanded for doing exactly what [Cheever] does in the movie. Your impulse in a potential disaster is to protect your family and it is very, very difficult to have this kind of information and not use it for your family’s benefit.” 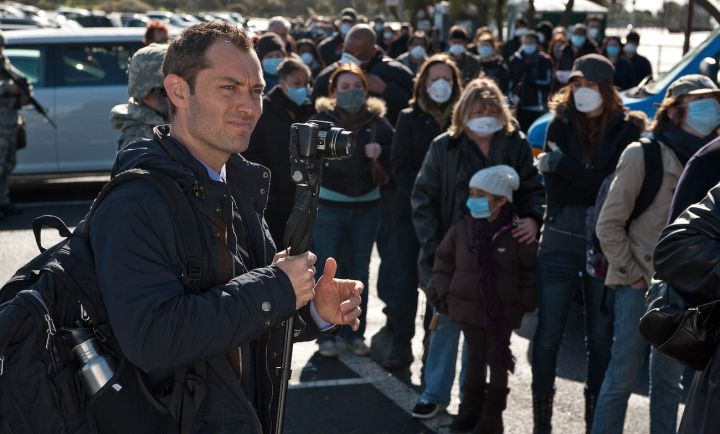 Ya know Alan Krumweide (Jude Law)? The fake news-loving blogger who spreads conspiracy theories about the virus online while selling his own homeopathic remedy?

Offit says that’s “the one character that always haunts me.”

“This anti-vaccine activist who is essentially a huckster? I mean, I got an email today from somebody about Alex Jones [who is currently promoting a toothpaste that he claims kills coronavirus], and this is what always happens,” says Offit.

“With every outbreak, every disease, there’s an element of ‘don’t trust mainstream medicine, don’t trust doctors, don’t trust vaccines, trust me, I have this magic medicine that’s gonna make you better.’”

Fact: There are both buffoons and hard working folks behind-the-scenes

“Keep in mind that as incompetent as government seems, there are also so many people like [Winslet and Fishburne’s characters], who are incredibly devoted and do have your very best interests at heart,” says Coyle.

Fact: Yes, we should be super friggen’ cautious

Overall, the medical professionals reckon the film is pretty bang on when it comes to conveying the realities of a pandemic.

Have a go of this quote from Dr. Offit, will ya?

“I think the movie offered a very realistic sense of what you should be afraid of, as opposed to this free-floating anxiety, the idea that no matter where you are, you’re at risk.”

The doctors also applaud the messaging behind the film.

“I hope that people at least have a realistic expectation of how a virus is spread, how you can reasonably protect against that by hand washing, not touching your face, [and] social quarantining to some extent.”