Bindi Irwin is now taking time off social media to focus on herself and daughter after coming out publicly yesterday with claims that her grandfather, Bob Irwin, caused her “psychological abuse”.

To celebrate Father’s Day in the US, Bindi Irwin shared a heart-felt post on Facebook acknowledging the three amazing fathers in her life: her dad Steve Irwin, husband Chandler Powell and father-in-law Chris Powell.

However, one woman asked why Bindi did not include her grandfather in the post. Bindi responded, and explained that Bob is no longer part of her life, due to years of “mental abuse” which has brought the 22-year-old mother “enormous pain.” 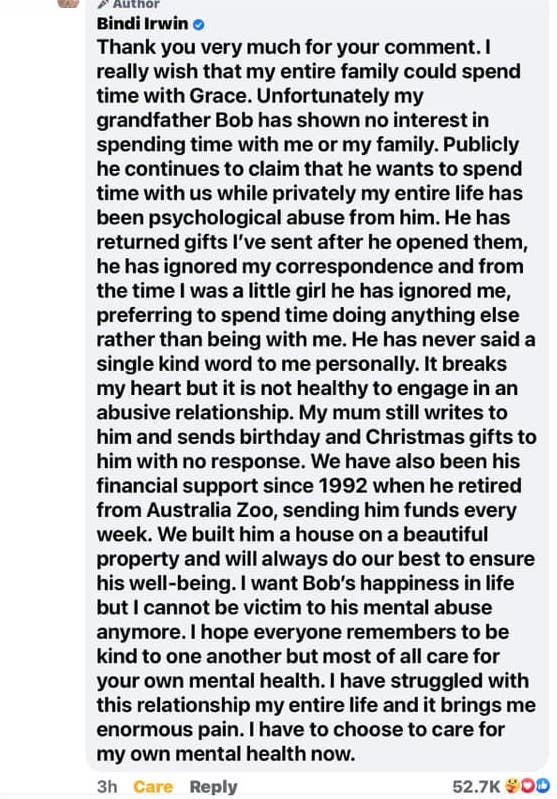 Many people were shocked by the comments, and understandably it’s caused a great deal of stress for Bindi who is a brand new mother.

Bindi has now responded the all the public attention in an Instagram post with her daughter, Grace Warrior Irwin Powell.

“Hi guys, Just a note to say thank you for your support,” Bindi wrote.

“I’m taking a break from social media and most of my work in the public eye for a month to be with my beautiful daughter and my wonderful family.”

The animal conservationist once again talked about the importance of mental health, and was appreciative of all people who reached out “to share their own stories of working hard to protect their mental health.”

“Thank you for sharing and speaking your truth. To my friends who are dealing with depression, anxiety and other battles every day – I see you. These issues are very real and deserve to be discussed and addressed,” Bindi continued.

Bob’s family have also come out today to defend him amidst these new shocking allegations.

“Dad is the most amazing father, grandfather and great grandfather,” Bob’s daughter Mandy Johnstone said, as per the Daily Telegraph.

Mandy praised her father, describing him as a huge part of her family.

“He always said to watch out for humans, they’re the ones that can be nasty. Stephen said the same. Why can’t people just leave him alone and let him live his life.”

There are truly no winners in this situation, so let’s hope that both Bob and Bindi can move on from this and just focus on their own happiness.