Struggling to get yourself or your pals in the Christmas spirit this year? Never fear, grinches, we’ve got you covered with a surefire method to have you ho ho hoing in no time.

Pour the eggnog, pile on the ham and wack on an episode of any of the below epic Christmas episodes via Stan to have you feeling as jolly as that bloke from the North Pole.

Have a good one, fam.

A Gay Olde Christmas – Will & Grace 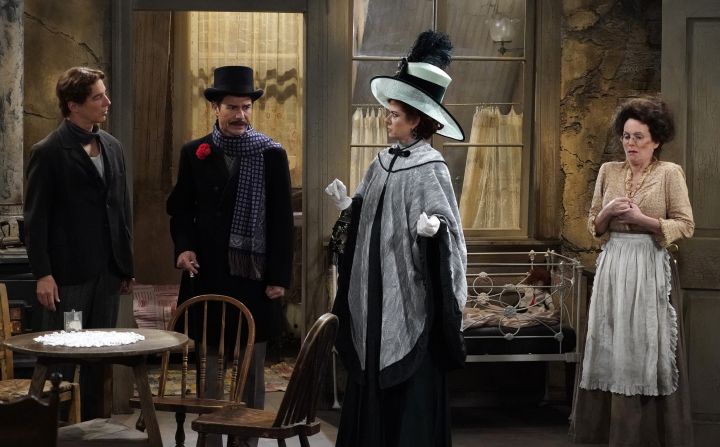 One of the major appeals with the Will & Grace revival was the idea of seeing the beloved gang react to modern day scenarios and themes like Trump, social media etc but for the Christmas special they took it right back to the days of old and it’s a wild ride through time, lemme tell ya.

Most of the episode is set in old timey New York – how the heck do they get there, you ask?

Well, the mates stop by the Immigrant Historical Society so that Grace can use the loo but the owner won’t allow this unless they take a tour of the facility which is how they end up in the vintage garb.

It’s got the same level of sass and flair as any other W&G ep but with a Wild, Wild West-esque setting that sees the mates ultimately learn the meaning of Christmas.

The One With The Holiday Armadillo – Friends 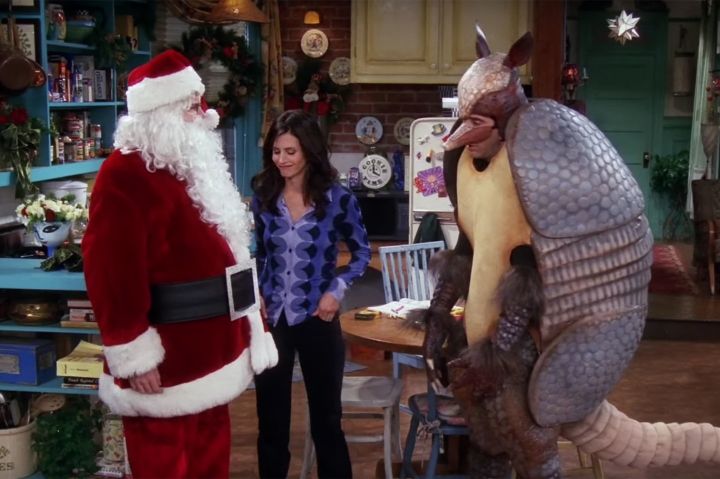 When it comes to holiday eps (be it Christmas, V-Day, New Year’s, you name it) no sit-com has ever been able to outrank Friends. They are, I believe, the superior holiday storytellers.

And while the series spun out a few Chrissy eps, the most iconic has to be The One With the Holiday Armadillo.

After discovering that his son Ben (played by the Sprouse twins) knows more about Santa than Jewish Christmas, Ross goes on a last minute dash to hire a Santa suit to educate his son while in costume but the best he can find is an armadillo suit.

As Ross attempts to teach Ben about Hanukkah, Chandler rocks up dressed as Santa and Joey appears in a Superman suit for unknown reasons.

It’s just an absolute hoot of an episode with plenty of memorable moments that are hilarious all year ’round. 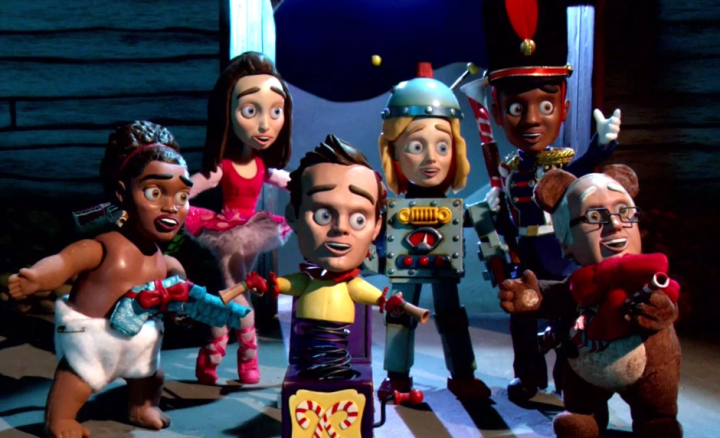 You’ve gotta give Community major props for originality with this one for its ingenious format, one that I don’t think any other sit-com has done.

The episode conveys the characters in stop motion animation which makes for a lovely little Christmas vibe that offers up ample laughs in a different format.

It starts with Abed waking up and discovering that he lives in a stop motion animation world where he and the entire community are basically cartoon characters.

As is tradition for Chrissy episodes, Professor Duncan and the rest of the gang help Abed to try and discover the true meaning of Christmas. 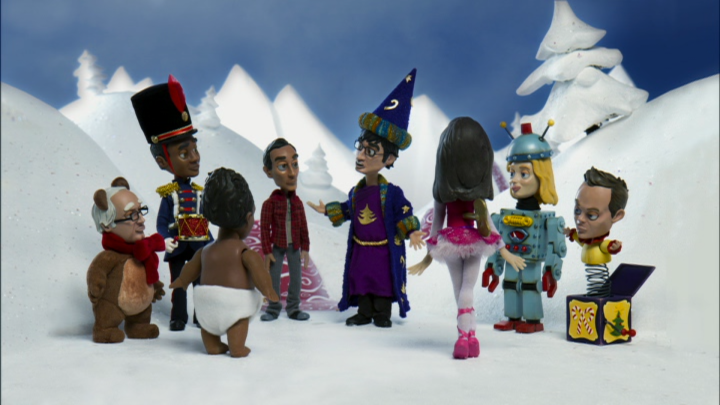 The episode was very well received at the time and even scored an Emmy Award for Outstanding Individual Achievement in Animation – character animation, making it the first Emmy-win for the show. 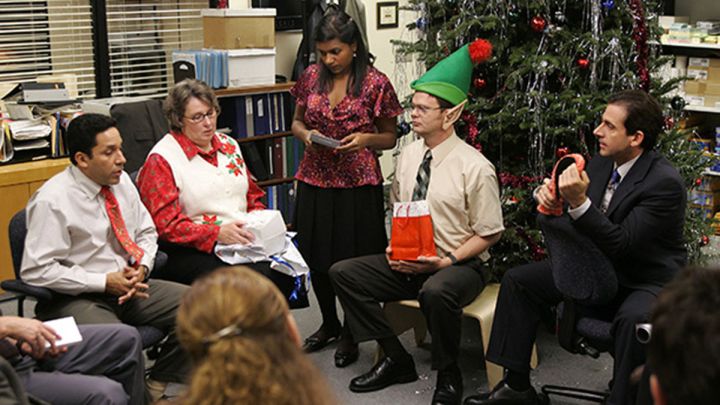 The basic premise of Steve Carrell‘s The Office is to convey real life, albeit exaggerated, office scenarios in a way that worker bees can relate to. The Christmas episode is no different as we see the characters go through the motions that I’m sure you and your colleagues went through at your recent work Chrissy shindig.

The staffers hold a Secret Santa prior to the Christmas party which goes about as well as you’d imagine.

Jim receives Pam and puts in a fuck ton of effort to nail her gift. Michael far exceeds the $20 by getting a $400 iPod for Ryan only to be disappointed by the handmade oven glove he receives from Phyllis.

To numb the pain of his shitty gift, he breaks company policy by buying heaps of booze for the upcoming Christmas party which makes for a cracker of an ending. 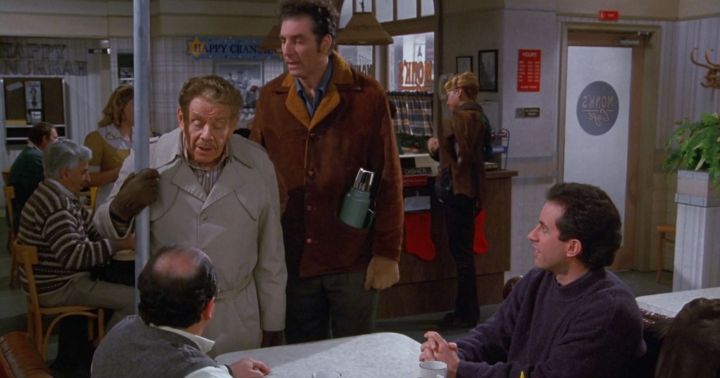 Perhaps one of the most iconic Seinfeld eps ever, purely for the fact that it birthed the still-celebrated holiday of Festivus.

Frank Constza, AKA George‘s dad, AKA one of the greatest secondary characters of all goddamn time, invites Jerry and the gang over to celebrate in the holiday he created back in the day called Festivus, much to the annoyance of George who is still scarred from the cooked holiday.

Here are the basic pillars of the minimalist occasion:

An aluminium pole instead of a tree

The Feats of Strength (a chosen person, in this case George, is forced to pin Frank to the ground to end the holiday)

The Best Chrismukkah Ever – The O.C. 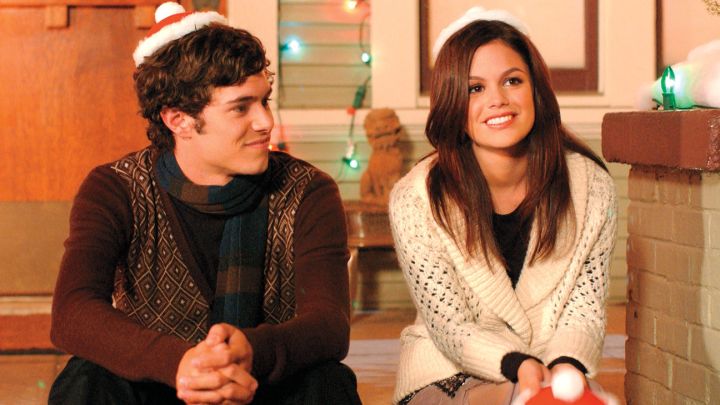 In addition to Festivus, another iconic TV-holiday that had a major cultural impact is the Seth Cohen-invented Chrismukkah, a hybrid of Christmas, as per his protestant mama, and Hanukkah, as per his Jewish father.

Your television BF created what he describes as “the greatest superholiday known to mankind” when he was six-years-old and in this ep, he and his pals and relos enjoy the Chrismukkah festivities.

According to Cohen, Chrismukkah consists of “eight days of presents, followed by one day of many presents.” Sounds like a pretty sweet deal.

No matter who or what you pray to, Seth’s unique take on religion makes for a v. cute holiday ep.

FUN FACT: In December 2004, Chrismukkah was listed in Time magazine as one of the buzzwords of the year and was added to the authoritative Chambers dictionary. 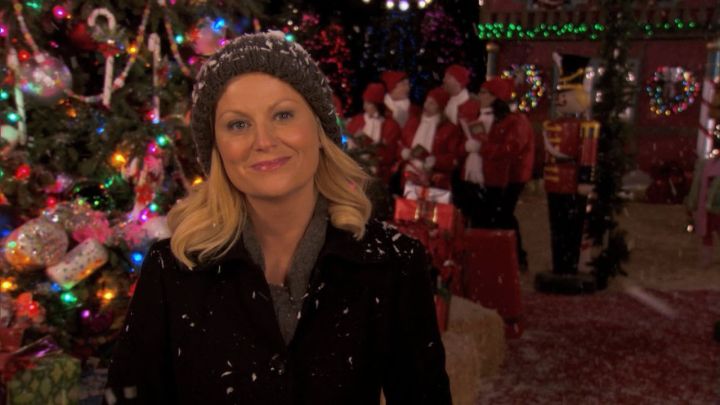 Despite the surprisingly dark storyline of this episode, it absolutely deserves a place on this list for the LOLs, the xmas backdrop and the overall camaraderie of the gang.

Leslie finds herself locked in a sex scandal with a sleazy local councilman (falsely accused, mind you), forcing the rest of the office to take on Leslie’s workload while she deals with the scandal.

Her friends basically do what they can to pick up the pieces and still ensure that they have a sick Christmas which makes for some extremely cute moments (like the sweet exchange between Ron and Leslie in the above video).