PEDESTRIAN.TV has teamed up with Walt Disney World to plan your next ~magical~ vacay.

I don’t wanna underestimate your researching abilities, as I’m sure you’re more than capable of planning your own trip (I’m lying, I don’t think you’re capable at all), but I thought I’d take you under my glorious wing to help you out.

I won’t get too specific about what you should do – different strokes for different folks and all that – but the more you know about Walt Disney World before you go, the better.

To give you a mental picture, Walt Disney World is the literal size of Manhattan. As in, the Manhattan. The one that every single American sitcom is based in. The Manhattan in New York. Got it? Manhattan.

That’s a massive resort to explore in however long you have there, so just keep that in mind when you’re planning to hit up two different rides on opposite sides of the Manhattan-sized Walt brainchild.

For the most time-efficient trip, you need to map out your days so you can cover as much ground as possible without missing a single thing.

As previously mentioned, Walt Disney World is ‘uge. Did I tell you all that it’s the size of Manhattan? Crazy stuff.

But instead of this weird Manhattan unit of measurement I keep going on about, let’s break it down into sections. 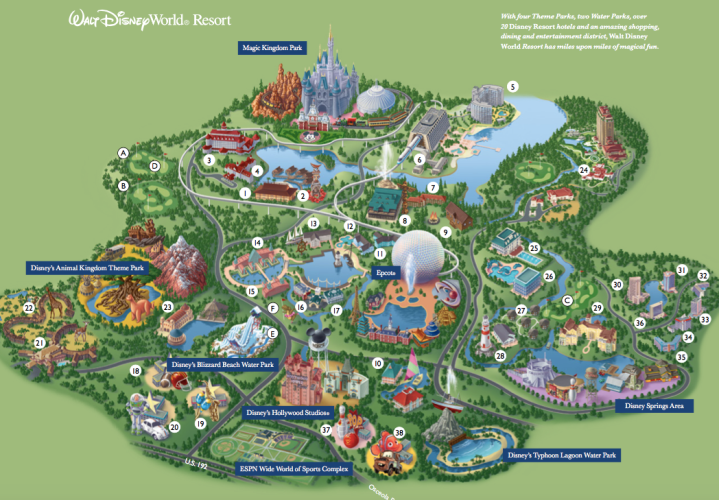 It really is a mammoth beast.

I’m just going to burst your bubble and inform you that no, you won’t be able to try every single dish served at Walt Disney World, unless, of course, you have a spare 20 years up your sleeve.

The good news is that if you really commit to it, you’ll be able to chew off a fair chunk of the park when you’re there. I strongly recommend studying the menus from the restaurants back-to-front and circling your favourite restaurants on the map you’ve printed off (print off a map).

Here are a couple of great starting points if you’re feeling overwhelmed:

Tip of the iceberg, comrades.

4. Your mates need to be on your level

This is probably the most important aspect of your entire trip and I’m not exaggerating.

Have you already picked who you’re going with? Have you thought about your choice? No, have you really thought about it? Didn’t think so.

If you’re dragging along a reluctant mate/datemate/soulmate then expect them to bring you down. You need someone who is as amped as you are to be there, and hyperactive enough to cover hundreds of kilometres in a single day.

Have a long, hard look at the person you’re thinking of taking and question everything.

5. Your phone goes a long way

Scratch my previous statement – this is the most important aspect of your entire trip.

Because it’s 2019 and everything relies on tech, you absolutely must have a phone on you at all times. Not only to call your pals if you get separated, but to use the Walt Disney World app to book restaurants or use the GPS-enabled maps to suss out which ride you want to go on next. Or just, y’know, quickly send people photos of you wearing Mickey ears to spark rage.

Plus, the entire place has free Wifi so you won’t even use that precious, precious data.

Pro tip: a portable phone charger should be the first thing you pack. Well, second if you require medication to live or something, but it should definitely be a priority.