WIN: Tell Us About Something You Love Doing & You Could Score $5K To Keep Doing It

PEDESTRIAN.TV has teamed up with Swinburne University of Technology for their new open-world adventure, Swintopia.

If someone had told me there was a deadset open-world adventure to help you suss out a uni you’re considering, I probably would’ve actually made an informed decision about where I was going instead of blindly following my mates like a thirsty sheep.

Alas, that was not the case in the early-2010s, so I’ll just have to begrudgingly pass the news on to current students while I sit here seething with jealousy.

In lieu of holding an Open Day this year (you know, because of the pandemic), Swinburne has created an Animal Crossing-esque campus experience, Swintopia, for potential students to cruise through. And, to celebrate they’re chucking a cool $5k at someone.

Win Your Own Career Starter Pack Worth $5,000

To win the $5K, just register to play Swintopia (for free), enter your details in the form above and briefly discuss (in 25 words or less) your passion and what you’d want to buy to fuel said passion.

Now, back to this alternate campus reality that I still want to play even though my uni days are behind me. Here’s a sneak peek of what it looks like: 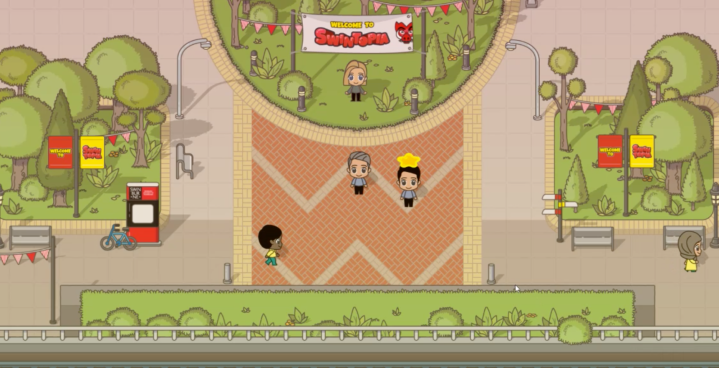 According to Swinburne, Swintopia actually is reminiscent of Animal Crossing, except characters will be based on actual students, alumni, and academics.

It’s also the go-to place to nab student discounts for real-life places like Alley Tunes and Lido Cinemas, and if there’s one thing I miss from my days at uni other than Sushi Tower and not making friends, it’s that sweet, sweet student discount.

You may also bump into the first Aboriginal senator for Victoria, a footy player, a Gogglebox star, a former Survivor and House Rules contestant, and a novelist who wrote Star Wars After Lucas.