What’s With All The Hateration, Holleration & Flat-Out Racism On Grindr?

Bi-sexual, bi-racial, fine bi-me. THE OPEN PROJECT – a Pedestrian x Smirnoff Collaboration aspires to start a conversation – ranging from newsy pieces to deeper-divers – about the issues worth talking about over the next 12 months. Why? ‘Cause life’s better when we’re open to new ideas, opportunities ’n experiences. To learn more, head over HERE.

To increase inclusivity across the board, we gots to stamp-out exclusivity whenever it arises. So, do me a solid – open up that brilliant mind of yours and pretend you reside in America: the home of the street-side hotdog stand.

One of these vendors has set up shop just a stone’s throw from your house, which is perfect, right? You love yourself a sausage whenever you can get your hands on one. From kranskies to rotwursts, you care not for what shape or size it comes in, you just want them in and around your mouth.

Last week, however, you munched on a banger that made you sicker than a 360º no-scope, bro. In fact, all you could do was lie on the freezing tiles of your bathroom, rocking yourself back and forth.

Yet you still go back to the sausage stand. With its ever-changing, rotating range of snags, and the sheer convenience of its location, the temptation’s too strong – even if it leaves you feeling empty, cold and overwhelmingly alone.

For the uninitiated, this is what Grindr (and its bedfellows) can often cause its users to feel. We still flock back to it though, because it’s the easiest way to get a sausage at any given point of the day.

This crappy sensation is the end result of hunting for and / or landing a root, but it’s just the tip of the D. You’ll be feeling particularly dank if you’re not a chiseled, straight-acting, white male. 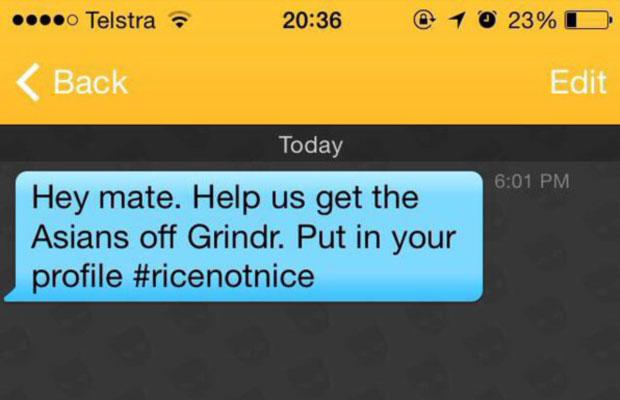 Racism, in addition to general shaming, is rife on gay male geo-social dating apps, and little (besides the efforts of champs like Racists of Grindr) is being done to stamp it out.

In April, SBS’s National Indigenous Television (NITV) was one of several media outlets to report the hefty racism an Indigenous university student was copping on Grindr.

Dustin Mangatjay McGregor, a Yolngu man living in Adelaide, shared screenshots to Facebook of disgustingly cooked statements he’d received. These slurs ranged from people making their racial preferences known from the get-go, to using racism as a means to express their disinterest.

“From my experience, people that are looking from the outside see the gay community as one ‘big happy family’,” he says.

“When in reality, that’s not necessarily the case. It’s disappointing, as you might think that an oppressed group would help lift other marginalised people, yet here we are beating each other down.”

Just like our broader society, there’s a clear hierarchy in the gay community – one that’s often structured by race.

“The white, attractive male is at the top of this pyramid and they command the attention, the power – Asian and Aboriginal men are usually at, or come close to, the bottom.” 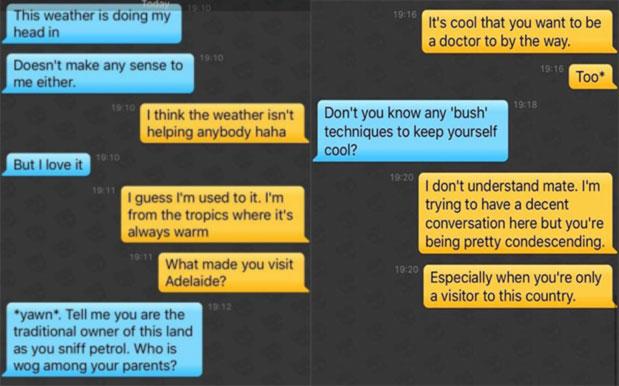 “The line ‘no rice or spice’ is a common quote on people’s profile description,” McGregor continued. “I’m regularly calling people out on Grindr for promoting these comments. I’ve also noticed that the people who say these things are usually white men.”

“I’d like to say [it] surprises me, in this day and age, that so many negative stereotypes exist regarding Aboriginal people, but it’s something I’ve grown up with. I remember when I moved to Darwin and students in my class, who were barely 13 years old, were making offensive racial remarks about Aboriginal people.”

“Some of my gay friends were particularly astounded and told me that they’ve not received any form of abuse like that in their entire lives. I think overall these posts have raised awareness to the fact that the struggle to combat racism is still well and truly alive.”

A large portion of gay men believe using phrases like ‘no Asians’ in their descriptions isn’t a matter of racism, but that of personal preference.

Jeremy Helligar, during an interview with Queerty about his book Is It True What They Say About Black Men?: Tales of Love, Lust and Language Barriers on the Other Side of the World, weighed in on the racism-or-personal-preference debate.

“Saying I like apples better than oranges is a statement of preference,” he says. “Writing ‘No Asians’ in your Grindr profile is not about preference – it’s about exclusion, especially when you insist on putting it in writing.”

“I don’t understand how people can’t see the problem with this. It’s discrimination, which is key to racism. And the sad thing is, it’s an artificial, misguided distinction because Asian is as varied as White.”

“Asians are no less varied than Europeans, yet some people think it’s perfectly fine to lump them all into a box because a few physical traits fit-all. Then they label the box ‘Asians: Do not touch!’ and say, ‘Sorry if you’re offended, but it’s just my preference.’ Well, you know what? Using the ‘preference’ defence doesn’t make it any less racist.”

“If you’ve never been attracted to an Asian guy, or a black guy, or even a white guy, that doesn’t make you racist. What makes you racist is when your lack of previous attraction guides your future interaction with them, when you close yourself off from them completely. So instead of turning down an Asian guy, or a black guy – as most white guys would another white guy – because you’re just not interested, you make it completely about colour. How is that not racist?”

Is Grindr doing anything to combat this racism? Nope. Quite the opposite in fact. For just a few dollars a month, you can become a premium users and FILTER the races you’d like to exclude from your grid.

IMO, there’s two reasons why this is happening.

Firstly, Grindr / similar apps are products of the internet. This allows users to voice intolerant opinions they’d usually keep abreast, because they’re safe behind the keyboards in their mother’s basement. Unlike Facebook, however, it’s a lot easier to remain entirely faceless (*cough* torso pic profiles *cough*) while expressing these regressive opinions.

Secondly, these apps create a physical distance between the user and the gay community – a community, as McGregor pointed out, that’s generally viewed (and for the most part is) a space of overwhelming acceptance.

Traditionally speaking, men seeking a sexual encounter would need to head to the nearest gay bar / club to pick-up. In doing so, they’d mingle with a diverse spectrum of people who’d advocate against intolerance in all its forms, including racism. Failure to comply with this train-of-thought would result in exclusion, AKA: getting your cock blocked. Seeing as you can land yourself a root without leaving your bedroom nowadays, that mandatory interaction has been dismantled, causing intolerance to fester in its wake.

So, how can you help end racism on gay dating apps?

Call it out, fam. Tell those knobs what for whenever you encounter it. You mightn’t be able to shift their thinking, but if enough of us do so, surely they’ll get the memo to shove their out-dated ideologies where the sun don’t shine.

Oh, and there’s another ace way of eradicating these tossers: don’t, for the love of god, sleep with them. Keep your legs closed and your dick holstered, regardless of how Tatum-esque they may be. Getting around their business would only serve to validate their opinions. Hopefully an aggravated case of blue-balls should knock some sense into ’em.