Back in 1977, with the sort of joyful, space-focused optimism that has since been brutally stomped out of us as a species, NASA sent two probes named Voyager 1 and Voyager 2 out towards the far edges of the solar system. These probes would eventually become the first- and second-ever man-made objects to enter interstellar space — the first objects to slip the surly bonds of the solar system.

These spacefaring robots were fired outwards with the purpose of finding out more about the other planets in our solar system, with their missions repeatedly extended as they continued to drift outwards and continued to transmit data back home to the Earth. But they had another purpose as well: To act as both a record of human civilisation and as something of a ‘Hello!’ to any alien intelligence that might happen to come across them.

This was done with a matching set of gold-plated copper 12″ records, one stowed aboard each of the Voyager probes. Each record contains a broad cross-section of elements of human civilisation: mathematical equations, recordings of ancient and modern languages, photos of life on Earth, diagrams of human anatomy, music ranging from Bach to Chuck Berry, and maps indicating our place in the galaxy.

Pictured: This is us, aliens! We hang out in space too!

The selection process for what would be included on the records was long and fraught with controversy (notably: disagreement over whether nudity is obscene). A committee headed up by space genius and big-time stoner Carl Sagan spent a year trying to solve what amounts to a real head-scratcher of a problem — how do you convey as much as you can about humanity and the Earth in a limited amount of space and in a way that could also be feasibly understood by an alien intelligence that is likely completely, well… alien to us.

Pictured: We look different and stuff, and we’ve put lines on a globe also.

The completed work is a thing of beauty. A delightfully loving portrait of a species that comprises a great diversity of cultures and accomplishments — a warm look at what it is that makes us us, notably missing the things that make us awful. No war, no prejudice, no exploitation. It’s enough to make you feel actual love for the human race as a whole, something that seems to be getting harder and harder to do as time goes on. It’s perfect, except for one thing. 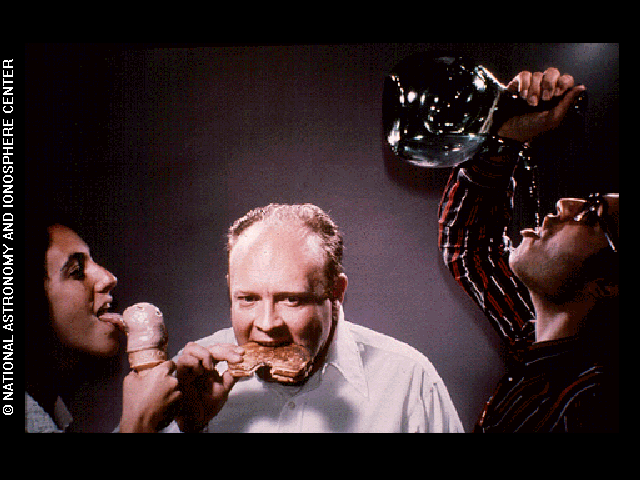 This freakish and hideously cursed image is one of the 116 included on the golden records, somehow selected as a necessary photograph to convey the human experience. The caption provided by NASA describes the image as a “demonstration of licking, eating, and drinking“. It would be hard to argue that this isn’t the case but fuck me, they chose a very weird way to do it.

Pictured: A man seemingly crafting a Wu-Tang Clan symbol out of a toasted cheese sandwich.

Even disregarding the many curious details in the image, the composition alone is deeply strange. Why is the ice cream-eater shunted off to the side and pride of place given to the sandwich guy? Why is the sandwich guy lit up like an escaping prisoner in an old-timey movie when the other two are shrouded in darkness? Why is all of this relegated to the bottom of the frame, leaving an ominous swathe of negative space at the top?

But then the details: Why go to the effort of toasting the sandwich? Why has the man taken a bite out of the sandwich, reversed it, and started to hoe into the other side? Why have the man drink out of a comically large vessel that is apparently either a high-concept watering can or a bong? And, most importantly, why are the licker and the drinker facing off against each other with a palpable sexual energy which might go some way towards explaining the clear displeasure of the sandwich-eater?

In this artistic rendering provided by my friend Shaun, the scene takes on a markedly different bent when the sandwich man is taken out of the equation:

Pictured: Some sort of food perversion.

The Voyager program has, to date, cost an equivalent of multiple billions of dollars in modern money, and this, this is the image that we send out to the aliens to tell them how we eat. If the Voyager probes are found, will the aliens come to us expecting to eat sandwiches like absolute freaks? To eat only in weird, sexually uncomfortable groups of three? Will they expect us to drink water like an idiot child? It boggles the mind.