WATCH: Merkel Asked Trump For A Handshake, He Iced Her Out Hard

Donald Trump and Angela Merkel took their first official meeting at the White House overnight, and in a telling moment, the US president ignored the German chancellor’s request for a handshake in the Oval Office.

While Trump did shake Merkel’s hand on other occasions, including on her arrival, he left her hanging in front of reporters, responding to her question “do you want a handshake?” with dead silence and a slightly awkward look.

The US president has pressed the flesh numerous other world leaders, including Justin Trudeau and Shinzo Abe, in the same spot, and the internet has already commenced meming the shit out of the awkward moment.

Below, the two can be seen in a slightly more cordial exchange earlier in the day: 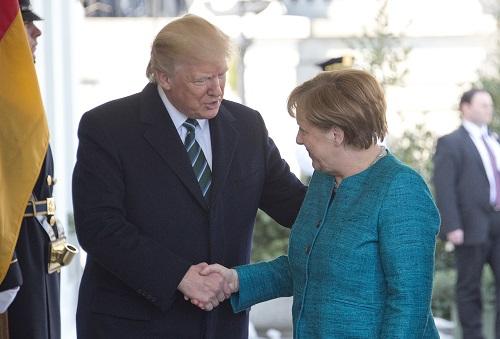 While on the campaign trail last year, Trump was highly critical of Merkel for allowing an influx of refugees into Germany, telling a rally in Virginia: “I always thought of as a very good leader until she did this.”

During the pair’s joint press conference overnight, he tried to break the ice with a joke about wiretapping, referring to 2014 allegations that the US was monitoring Merkel’s cellphone, and telling her “at least we have something in common, perhaps.”

She wasn’t really buying it:

I can’t breathe ???????? Merkel represents Germany like a boss pic.twitter.com/123RFLNH9Z

That said, Merkel tried to play nice throughout much of the meeting, noting that it was “better to talk to one another than about one another”, and the two discussed issues like the European Union and NATO.

Trump has previously expressed scepticism about multilateral trade agreements, and supported last year’s Brexit deision, so Merkel took the opportunity to try and sell him on the benefits of the EU, saying:

“… the success of Germans has always been one where the German success is one side of the coin and the other side of the coin has been European unity and European integration. That’s something of which I’m deeply convinced.”

On the subject of US trade with Germany, Trump said: “The negotiators for Germany have done a far better job than the negotiators for the United States, but hopefully we can even it out. We don’t want victory, we want fairness.”

The US president has previously been critical of NATO, calling it “obsolete”, but has since softened his stance, telling European leaders that strategic defence alliances remain important.

In his meeting with Merkel, trump said that the US is still in “strong support” of NATO, but added that its allies need to “pay their fair share” for the cost of defence, noting that some owe “vast sums of money.”