The Simpsons Are Going To Kill Off A ‘Great Character’

When you’ve been on the air for 25 seasons and 549 episodes, eventually your well of original plot elements is going to run reasonably dry. So what do you do when roughly 30 million less people are watching your new episodes than there was when you first started? You dig into the war chest of well trodden in television tropes in order to drum a bit of buzz. That’s what you do. That’s exactly what The Simpsons has done. And who can blame them? Well, everyone, I guess. But that’s not the point.

The point is that, in preparation for the shows unbelievable 26th season, the show’s bosses are trying to maintain public interest in new episodes of the long-running series by dipping into drastic territory. Where in the past they’ve teased characters coming out of the closet, now they’re going one step further: A so-called “great character” is going to die.

Exactly who this great character is who will meet his or her maker is yet to be known. Executive producer Al Jean has remained very tight lipped on the subject, offering up this one solitary clue: “The character that dies is portrayed by an actor who won an Emmy for playing that character.” On any other show, this would be an excellent clue. But because it’s The Simpsons, the number of Emmys awarded for voice acting currently sits at 14.

We do know that it’s not any of Hank Azaria’s characters, after the actor stated in January, “I honestly didn’t know who it was going to be, and now I do know. I can say that it’s not one of mine.” This rules out Moe, Apu, Comic Book Guy, Wiggum, Carl, Duffman and countless others.

This will be the show’s second dance with death in as many years, after the untimely passing of Marica Wallace forced perennial favourite Edna Krabappel, the sole character Wallace voiced, to be written off the show.

Until season 26 premiers and all doubt is removed, all we can do is speculate. 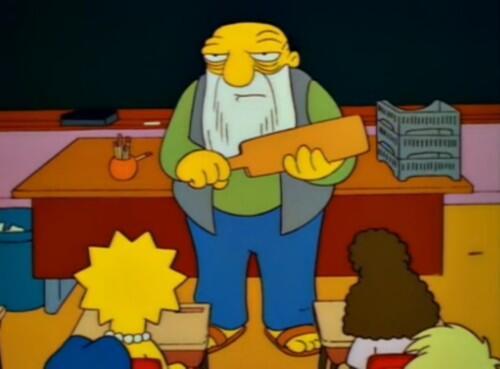