Yesterday’s $2.65 million Caulfield Cup was won by a horse called Dunaden, but the real winner, as always, was the Fashanz. Things were surprisingly tame off the track and inside the David Jones marquee, which was reportedly styled to emulate the gaudy trappings glamour of Marie Antoinette, or at least the part before the movie ended and they all died. Sounds super tasteful, plus getting leg/headless is a fitting pastime at the races. I bet there were macarons and miniature cupcakes too. It also wouldn’t be a 1770s-pre-Revolutionary-France themed day at a fancy event without blood and bad decisions, so let’s take a look at some of the fashions on and off the field.

In descending order of height, Tim Campbell, Firass Dirani and Anthony Callea scrub up okay; fine, they look nice, I guess. I’m not a fan of any of their footwear, nor the fit of Callea’s jacket, or the colour of Dirani’s chocolate suit, but like Mme Antoinette, I’m just being really picky and making unpopular decisions. To his credit, Dirani has done a nice job matching the colour of the suit with whatever it is he has smeared on his upper lip. 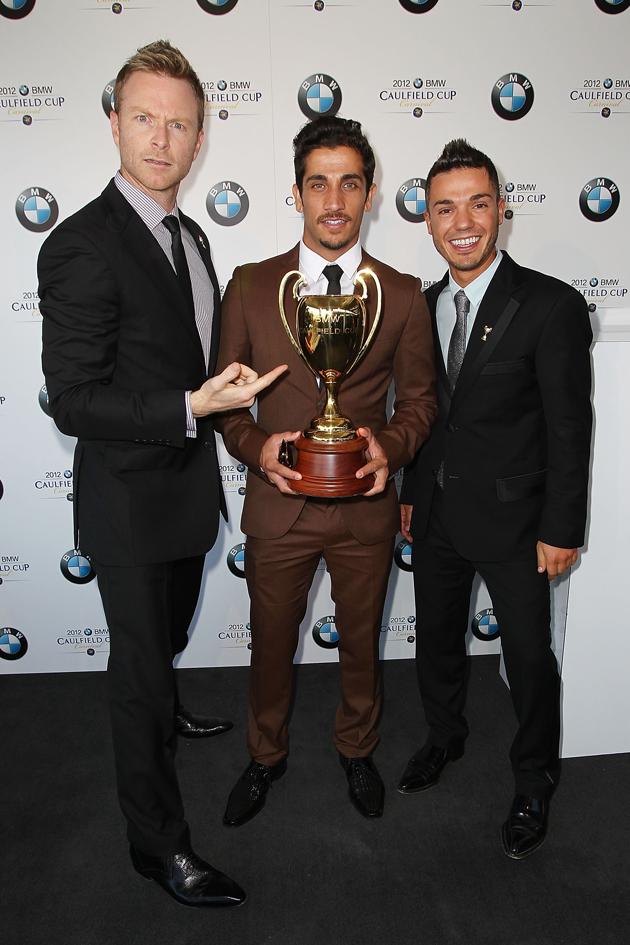 Lauren Newton has landed herself a swimmer in Matt Welsh. It’s a shame he didn’t race to the tailor beforehand to have something done about the fit of that jacket, because it looks like he has it out on loan from Bert. Lauren has a lot going on with the tulle and the sequins and the polka dots; plus there are earrings, bags, and ill-advised shoes and headpieces. In other words, it’s a whole lot of look, which I am willing to forgive just this once because she looks genuinely stoked to be there/a little bit like Reese Witherspoon. 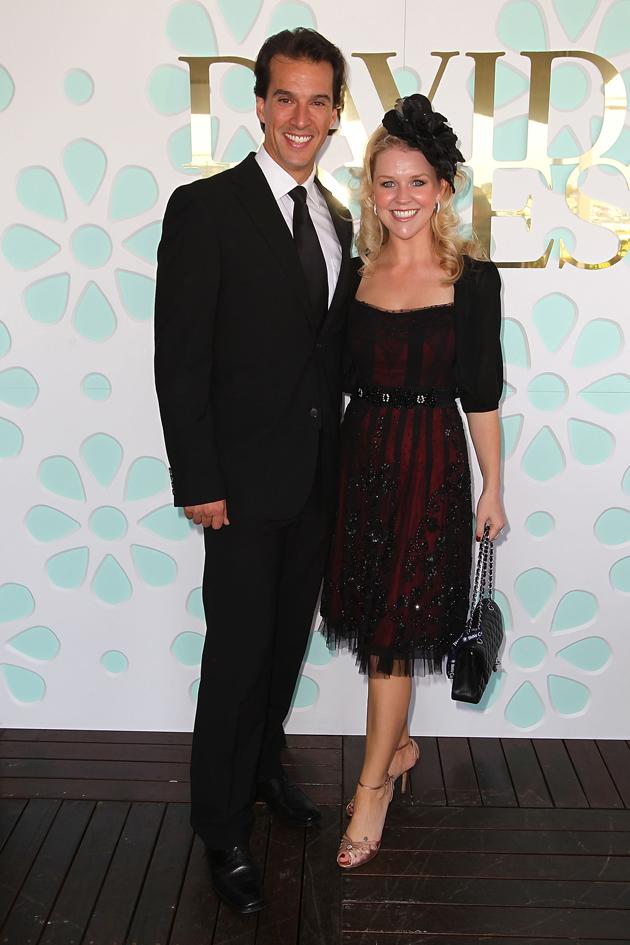 I don’t know who DJ Grant Smillie and model girlfriend Helen Cauchi are but they seem eager enough. Smillie opts for the requisite grey suit and Cauchi keems things casual but sleek with a thigh-splitting cobalt number, accessorised with a leather jacket and a trilby – a combination* favoured by Justin Bieber and this stock photo wanker. 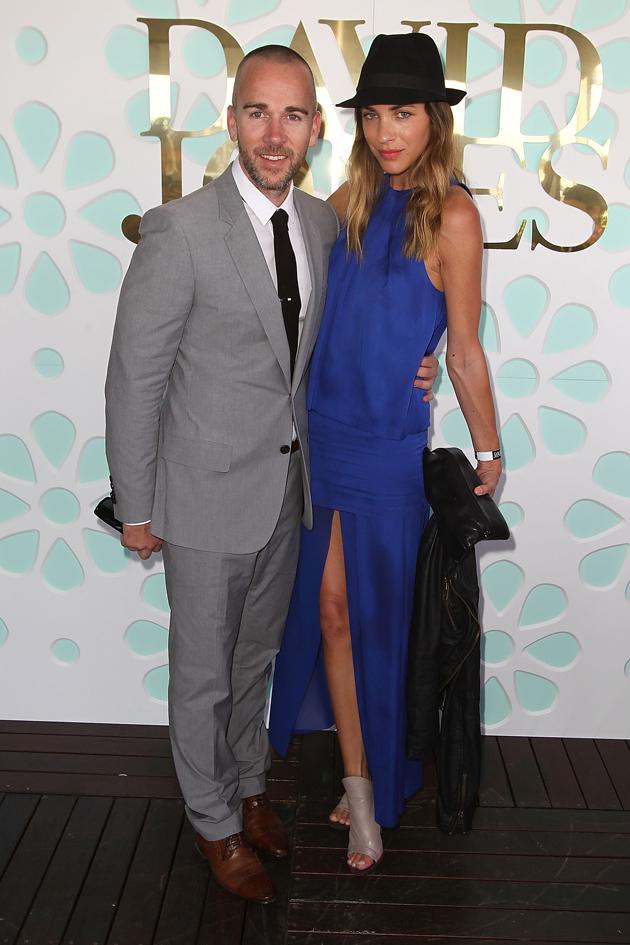 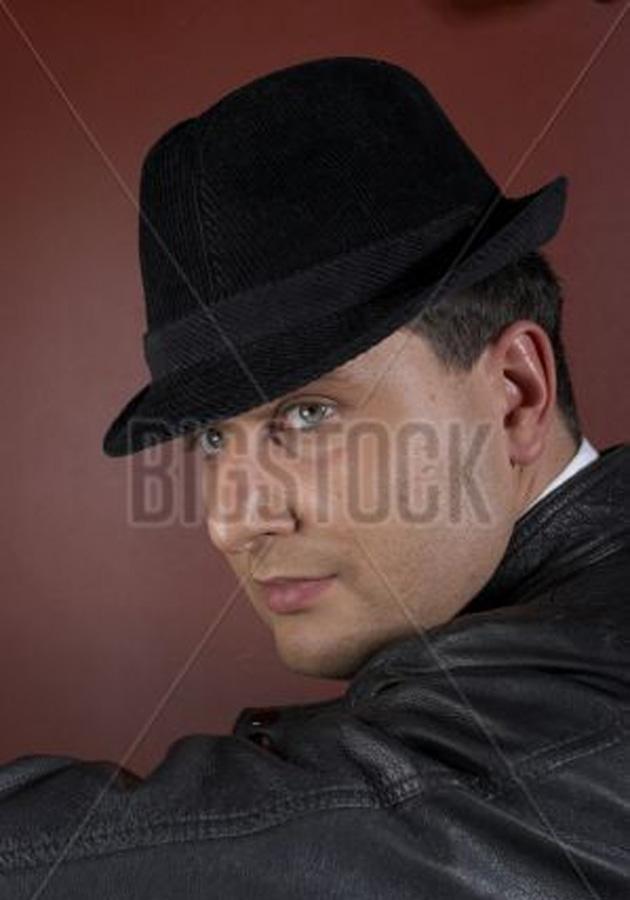 *Not a good combination.

I like Carrie Bickmore. I liked her even more when she said Quntas on national television. I do not however feel so great about Carrie Bickmore’s mint/aqua number, the fuchsia sandals and the undulating toothpaste squirt of a headpiece. Luckily, she accessorises with a winning Colgate smile. But what do I know? Next! 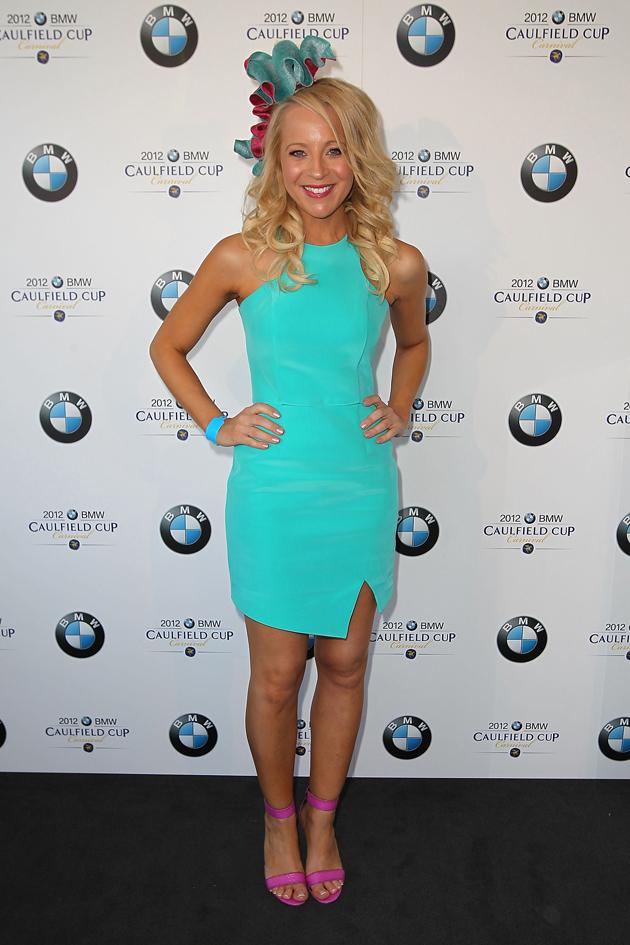 Gai Waterhouse can’t stand up because money is heavy, racing is exhausting and that hat is the worst. RIP Gay Pheasant. 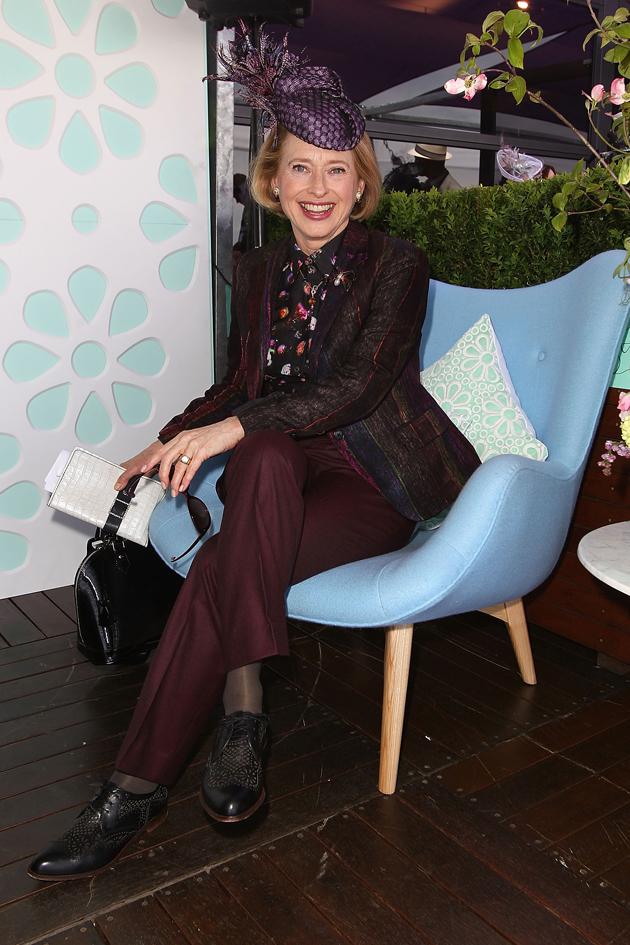 Camilla Franks has had a tough couple of months but manages to look extremely upbeat. That could have something to do with the fact that she looks like an eccentric gypsy peacock in mating season perched atop a treasure chest of delightful good times. There’s so much going on, but Franks owns it from the exploded lace orchid on her head down to her fishtail braid. On anyone else this would look ridiculous but Franks looks ridiculously fun, proving that an outfit is 90% confidence or some other tired cliché about fashion. 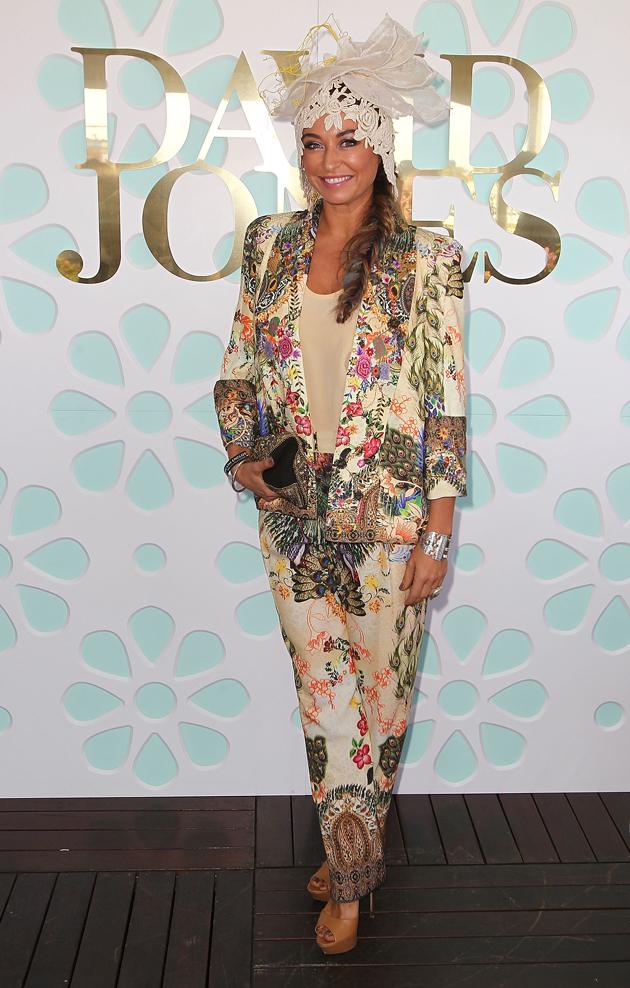 Milliners are the best/worst when it comes to red carpets, but like a fistful of butter cream iced cupcakes after a bottle of Veuve, you can’t keep them down. Gregory Ladner is no exception, but instead of ‘fabulous dandy‘ I get ‘creepy friend of my parents who shakes your hand for too long‘. Clammy. Credit where it’s due for having a go, being extremely literal and wearing a feed bag. 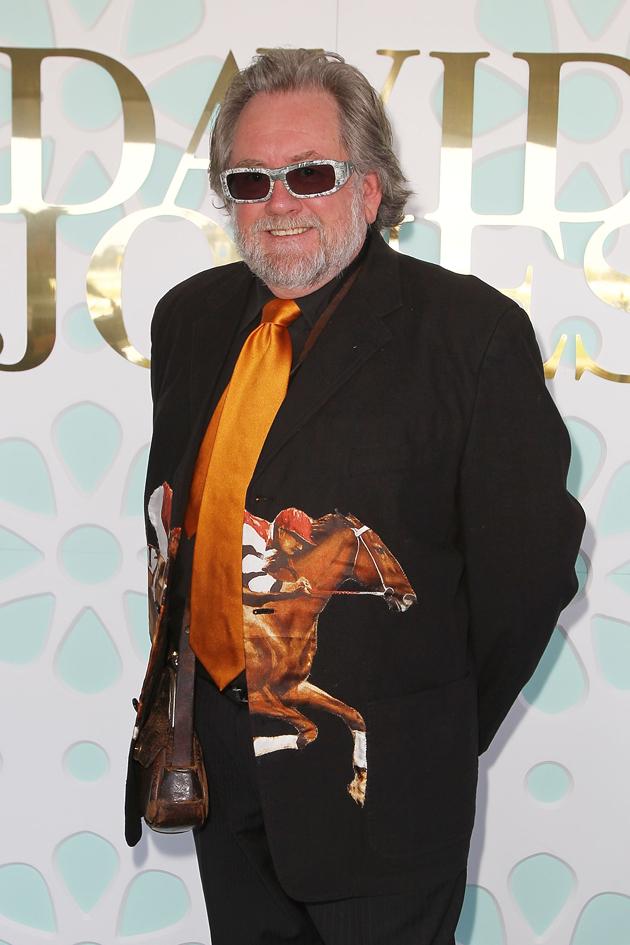 You can’t say anything bad about Australian cricketing legend Ricky Ponting and his wife Rihanna Ponting but lets try all the same. The old rules of ‘sportspeople not looking their best in formal wear‘ and ‘beige pumps being the sartorial equivalent of the snooze button‘ apply here like a job. 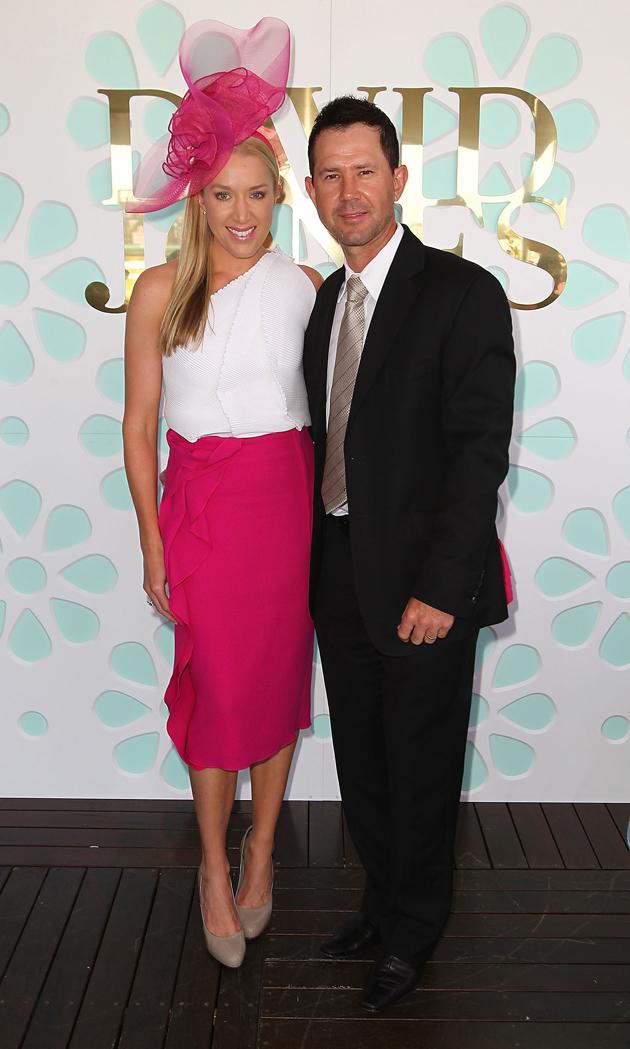 Not sure who Simone Callahan (UPDATE: forgive my momentary lapse in WAGdom, I didn’t recognise Simone’s maiden name, which of course used to be followed by née Warne) is but she’s extremely fond of matching her on-trend tangerine pumps with the same floppy wide-brimmed hat my mum dusts off every January – the one covered in tangerine zinc that I keep begging her to throw out. The white Herve Leger-y bandage dress is very Victoria Grayson and is appropriate for a day of smouldering death stares at your frenemies, aka everyone at the races. In hindsight, Simone Callahan is almost showing Liz Hurley who’s boss – just lose the hat. 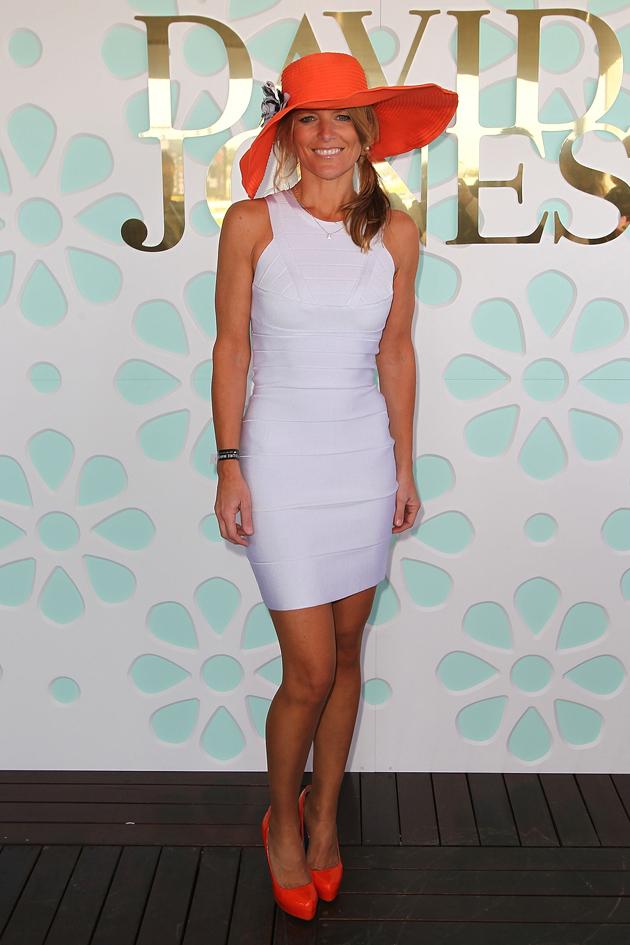 I’m feeling inspired by the inspirational H2T Burberry look on the inspirational inspiration Kate Waterhouse. I like the ease of an embroidered t-shirt and the open sandals but the off-the-runway look from an unseasonably heavy Fall 2012/13 collection and the full-figured peplum feel a bit seasonally incongruous with the Caulfield Cup, which is all about Spring and inspiration and full-figures and you get the point. The headband is very Blair Waldorf, which is entirely fitting. 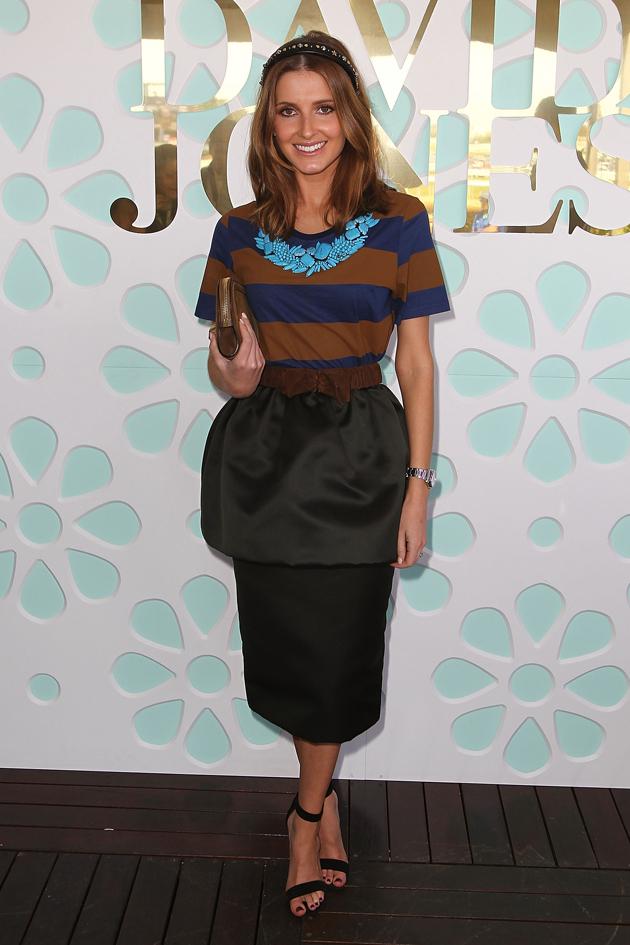 Heavy the head that wears the flower crown. In this case, the head belongs to David Jones racing ambassador Emma Freedman. So. Much. Pink. Like if Mystique from X-Men wanted to blend in to a WASP’s kitchen tea. 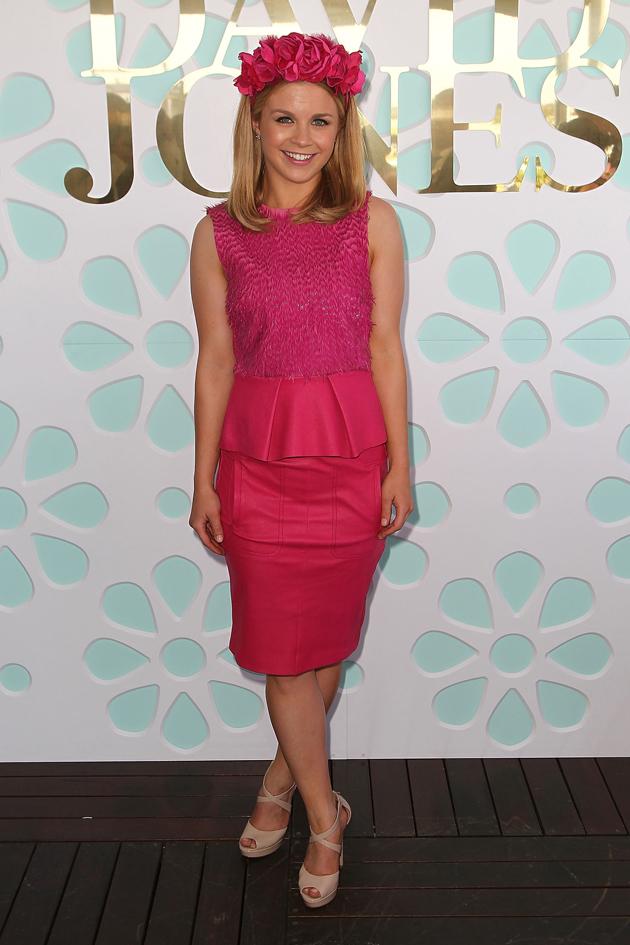 Samantha Harris looks like a sexy alien assassin from sci-fi movie starring Daniel Craig that doesn’t exist but I would watch in a heartbeat if it did. The shoes look like they could take both your eye and her ankles out. Side note: is that a sexy alien engagement ring or the Tesseract? 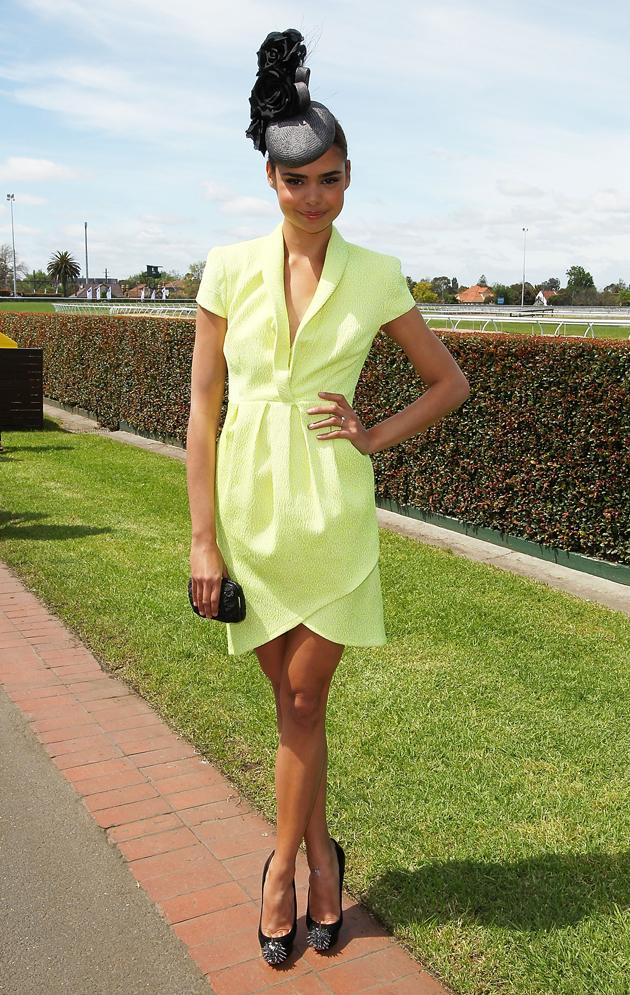 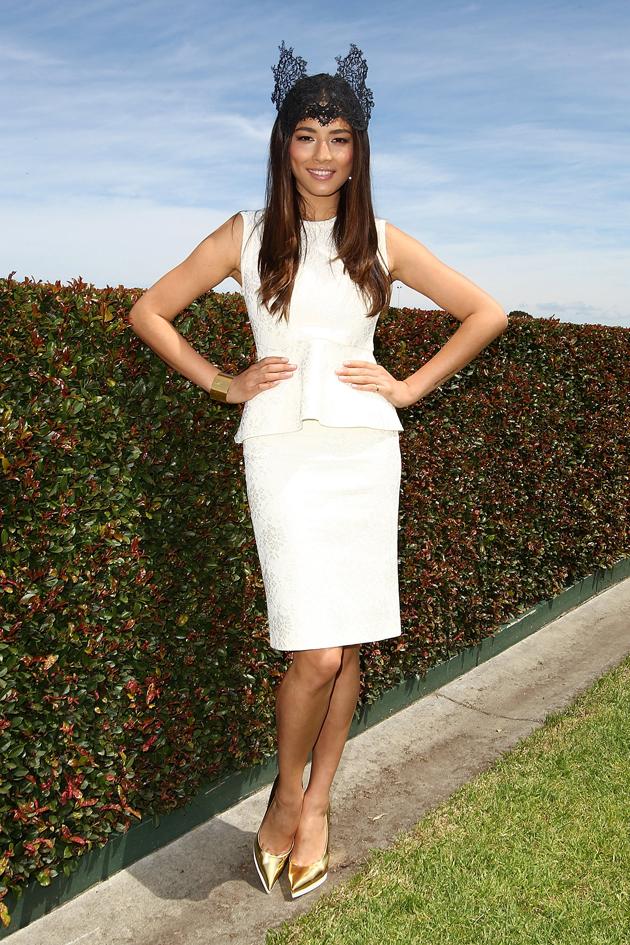 Here’s my dear old friend Lara Bingle bucking trends and tradition in a black camilla & marc wide-legged playsuit. The nonconventional race-wear and the Rodarte-inspired ear cuff are making it really easy for me to use words like ‘chic’, ‘fashion forward’ and ‘edgy’ without hating myself, which is a red carpet feat of the greatest kind. Nice job, Le Bing! 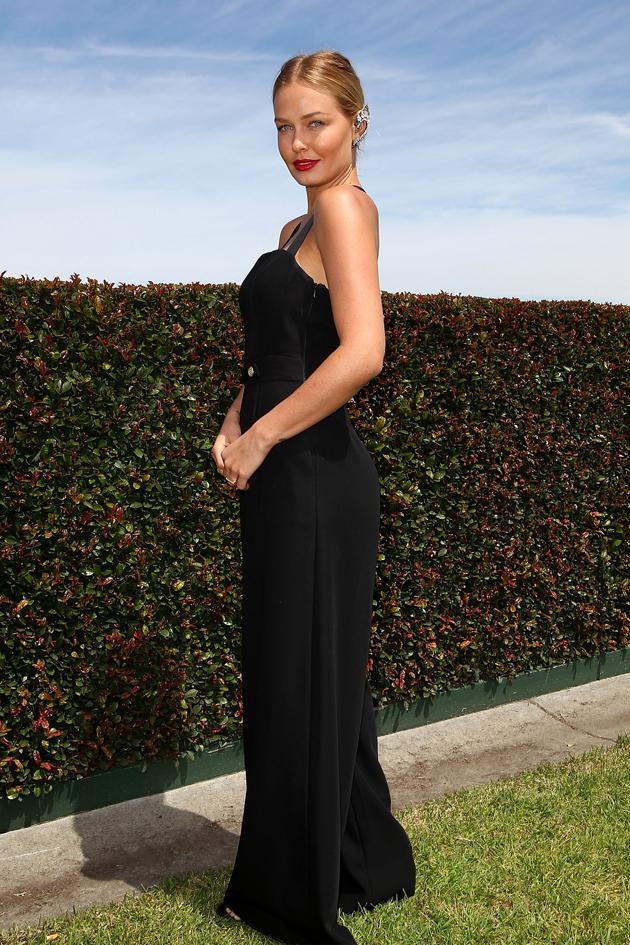 At some point during the day an envelope was opened and liquorice all-sort Sarah De Bono materialised out of thin air. 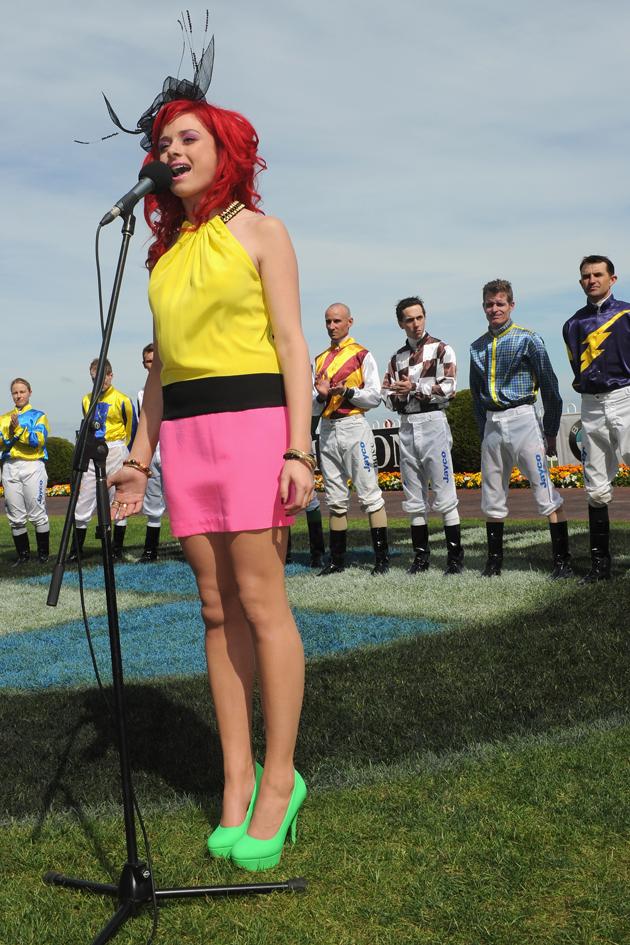