ICYMI: the dirty mud wrestle known as the 2013 Federal Election is officially on—ready the headlines, compose battle faces, wait patiently for The Chaser—with an election date set for September 7th aka #Auspol Christmas. Presents votes and incessant coverage for everybody!

While the leaders of the opposing parties, in the red corner Kevin Rudd, in the Blue (tie) corner Tony Abbott, graced TV and radio with appearances this morning to trash talk one another and perpetually forget policies to charm the country’s over 18’s, while girding national loins for convinced victory on both sides, The Daily Telegraph squirmed about its own agenda and published this frighteningly condemning front page with Rudd (presumably) asking the Coalition/Julia Gillard to read between the lines: 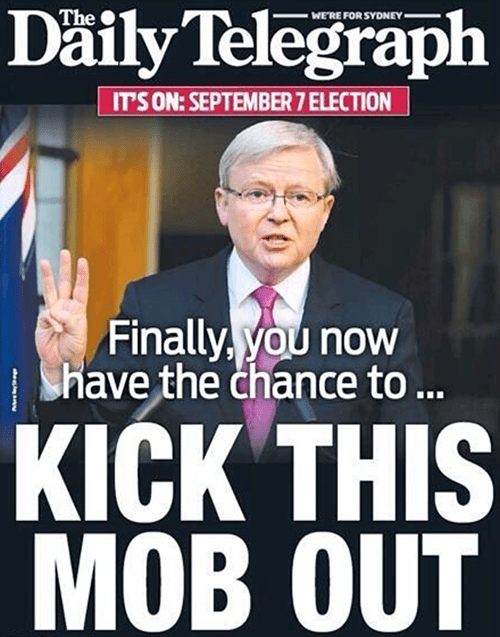 Hear that? Why yes, that really is the sound of impartial journalism being elaborately hurled, kicking and screaming out of News Corp‘s offices. Sigh. Couldn’t we wake up to a Monday morning without choking on our toast over blatant front page, candidate endorsement?

Before things start sounding scathingly hypocritical over here, it’s worth mentioning that the same (questionable) tactic was employed by Fairfax last month, pushing their transparent subjectivity with an editorial in The Age titled, For The Sake Of The Nation, Ms Gillard Should Stand Aside, followed by the tiresome personality over policy comment: “We are not saying Ms Gillard should stand aside because of Labor’s
policies, but because she has been unable to lift the party out of a
desperately difficult political position.” It’s pretty woeful that Australia’s two major news corporations have fell this low.

Kevin Rudd commented on today’s shouting front page—asking Australia to kick his ‘mob out’—by putting it lightly and saying it was “not terribly subtle“. The editorial to accompany the headline reeks so highly of Murdoch-inspired personal opinion it’s difficult to take the thing seriously. Does accusatory, one-sided phrasing really belong in a print publication, inherently designed to inform, provide balanced opinions and a trustworthy sense of impartiality?

The editorial wanes, “Now it’s your turn. We agree with the Prime Minister when he says that
“the old politics of the past won’t work for Australia’s future.” The
problem is, those old politics belong to Kevin Rudd. On September 7,
Australia will indeed find a new way – by throwing out a government that
has completely lost its way.“

By “this mob” does The Daily Telegraph mean “journalistic principles”?