Model of the moment Julia Nobis is joined by champion racehorse Black Caviar on the cover of the Vogue Australia’s December Issue. It’s the first time in the title’s fifty-three year history that a muscular black girl with four legs has received the honour, so suffice to say this is a fantastic moment for other muscular four-legged black girls with ambitions of the Vogue kind.

Shot by Benny Horne in an haute couture (custom built) photography studio in the foothills of the Dandenongs, Nelly’s stablemate Nobis wears a bespoke Alexander McQueen gown, while in an accompanying spread the female members of Black Caviar’s (crime?) ‘syndicate’ also feature in monochrome designer wares that may or may not be their own. It should also be noted that Black Cav is no stranger to custom made clothing and has bespoke skins made-to-measure for her, because she’s fancy like that. 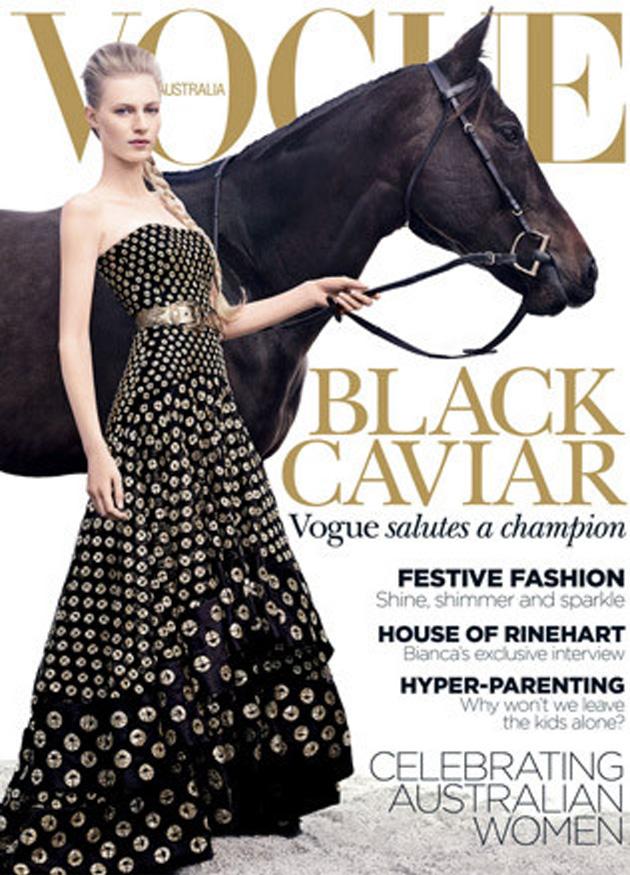 Editor in Chief and noted GIF fan, Edwina McCann, says of the mare “Black Caviar certainly knows when the lens is focused on her, and it’s terrific to celebrate her beauty, rather than just her speed,” and notes that due to unprecedented interest in the cover – rumours of which began appearing months ago – the publisher has had to bring the sale date forward to this Friday, just in time for Derby Day.

The December issue of Vogue, which is all about ‘Celebrating Australian Women’, also features an interview with The House of Rinehart.