Black and white is a classic colour combo. You can even use words like ‘chic’ non-ironically when you’re talking about it and you won’t be morally obligated to kick yourself in the face afterward. Just ask Coco Chanel, or her vampire progeny Karl Lagerfeld, whose monochrome circus came to town last week. Derby Day kicks off The Melbourne Cup Carnival (I think) and is known as much for its high stakes running races as it is for its fashanz on the field, according to their website. Derby Day has a customary black and white dress code and noted star pulling power and this year it attracted some big name marquee celebrités, including Nicole Kidman and Sophie Monk.

So crack open a beer and a tin of black caviar – it’s en Vogue now – and let’s take a look at some of the A, B and Y-Listers who donned their fanciest finery for the fun and fug of it.

Here’s Rachel Finch. She wears an inoffensive plaid-y dress that steers clear of matronly with a sheer midriff panel and bustle. Rachel accessorises with the frozen tears of a baby unicorn. She looks like a pretty, possessed demon Bambi who could take down everyone in the room and then deliver a perfectly poised news cross about it afterward. Back to you, Ron. 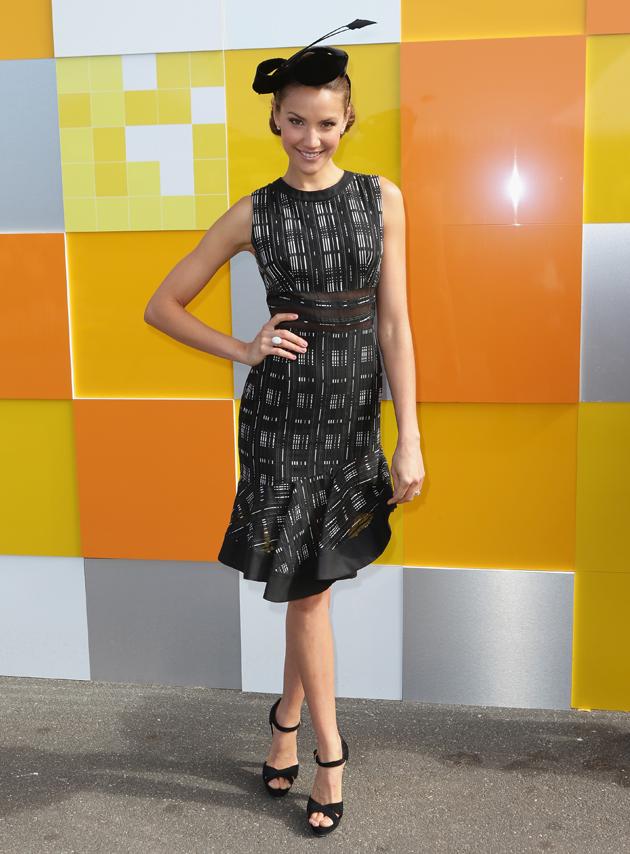 Oh no, Mrs Crowe. One-time Rusty lady lover Danielle Spencer wears a “banging” Colette Dinnigan dress which looks excellent on her “smoking” bo-day, but unfortunately every single one of those accessories is the absolute pits. Sorry, but she looks like a Toddlers and Tiaras contestant who binged on growth hormones. If you look up ‘The Worst’ in a fashanz dictionary there is a Coveteur-style tableau of all these accessories. Where do you start? The beige peep-toes, the “my-first-handbag” handbag, the school run sunnies, the Year 10 formal hair or the magpie that went through a stump grinder and landed on her head? I can’t even. Next! 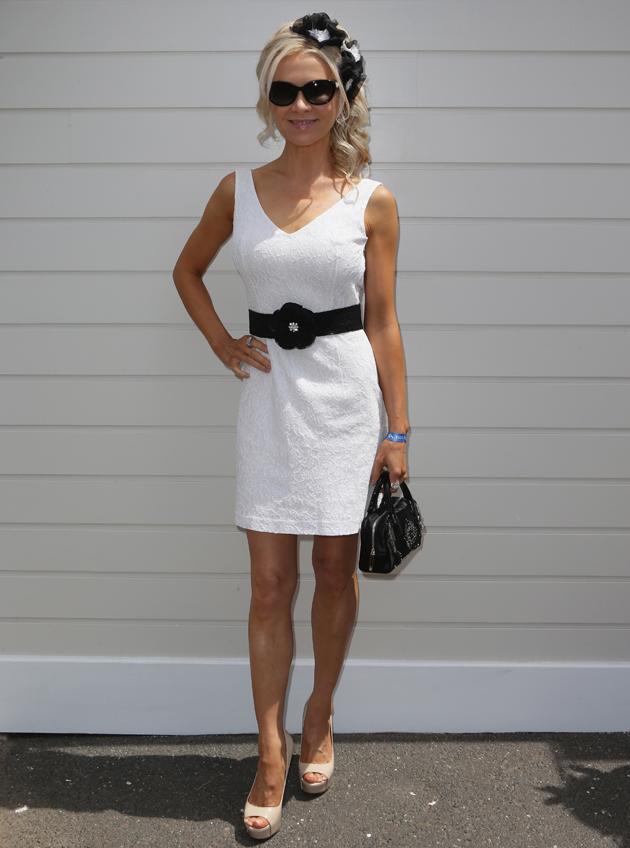 Jen Hawkins looks scary, good in Manning Cartell. Not big on the glazed over expression that comes with spending half your life cocking your knees inward and upward. She looks good though. 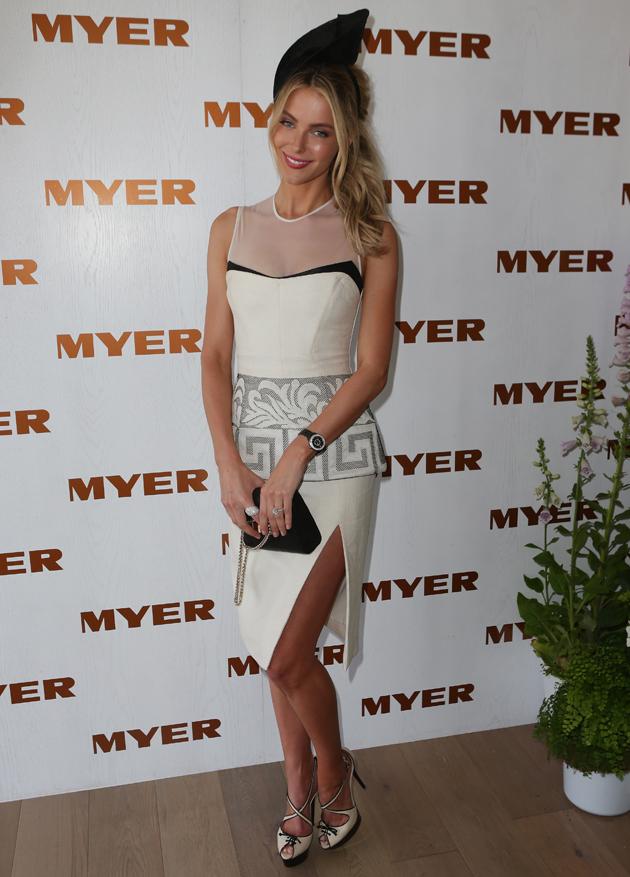 Cop an eyeful of these two! George certainly already has. Nicole Kidman is the toast of the town for less than twenty four hours in an environmentally friendly L’Wren Scott dress and Stephen Jones hat that screams Cecil Beaton’s Ascot Day costume for My Fair Lady’s Eliza Doolittle. The rain in Spain falls mainly on the plane that Nicole has already fucked off back to Paris in after collecting her Swisse Vitamins cheque and making a dash for it. Good girl. 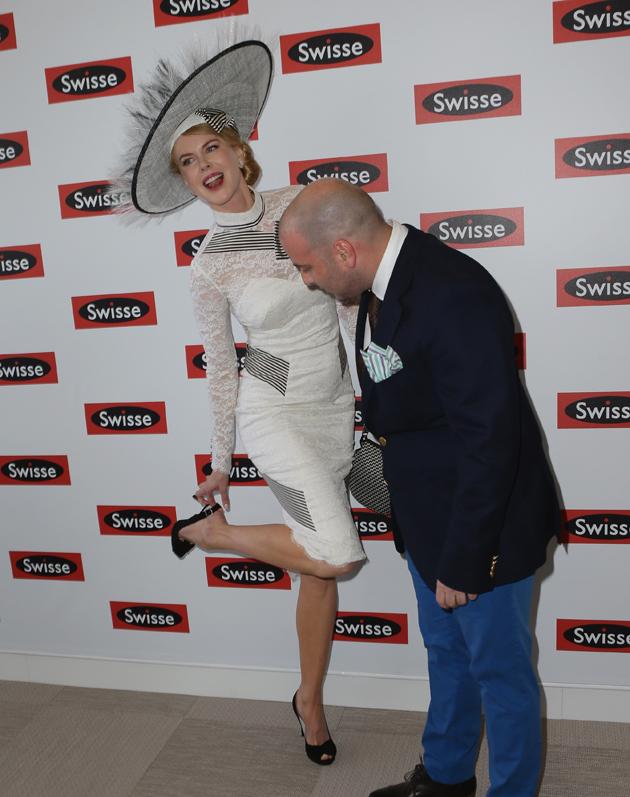 George Calombaris is obviously laughing at how bad his outfit is because that’s all you can really do when you look like the red carpet equivalent of food poisoning. Nicole looks super “alegant”, while George – who can’t pronounce ‘EL’ sounds – looks like sartorial “salmonalla” and would be wise to only stand next to Gary Mehigan from now on. 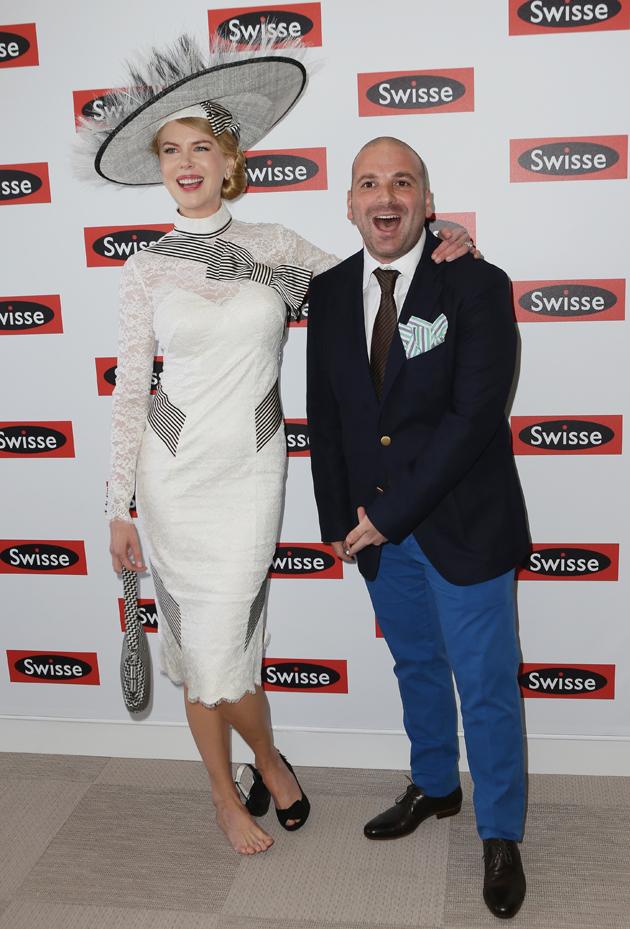 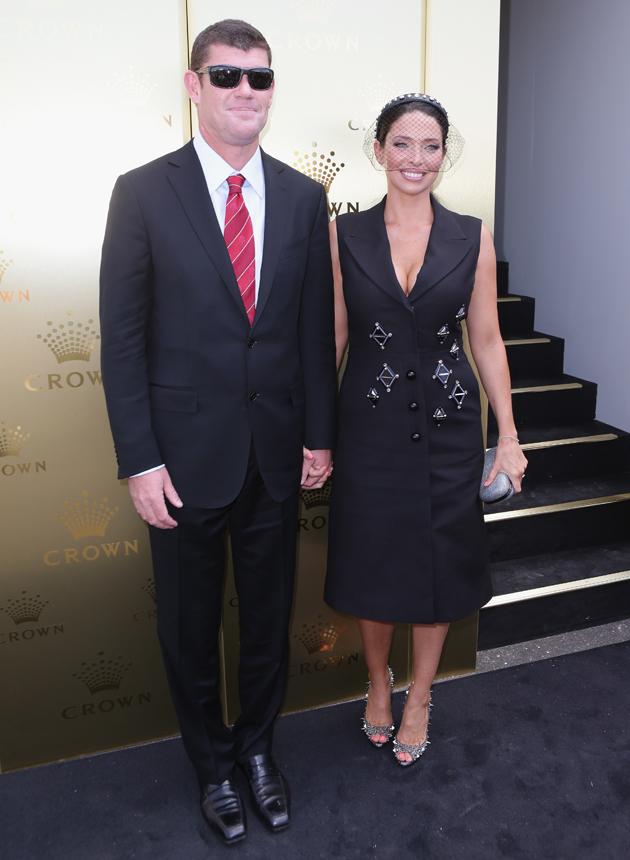 Lara Bingle keeps making it really hard for me to say questionable things about her behind the relative anonymity afforded me by the Internet on account of her winning streak of red carpet appearances. This belted Dion Lee leather jacket is “to die for“, as is the skirt when you see it from behind, and the jacked up akubra by Hatmaker is Hasidic chic. 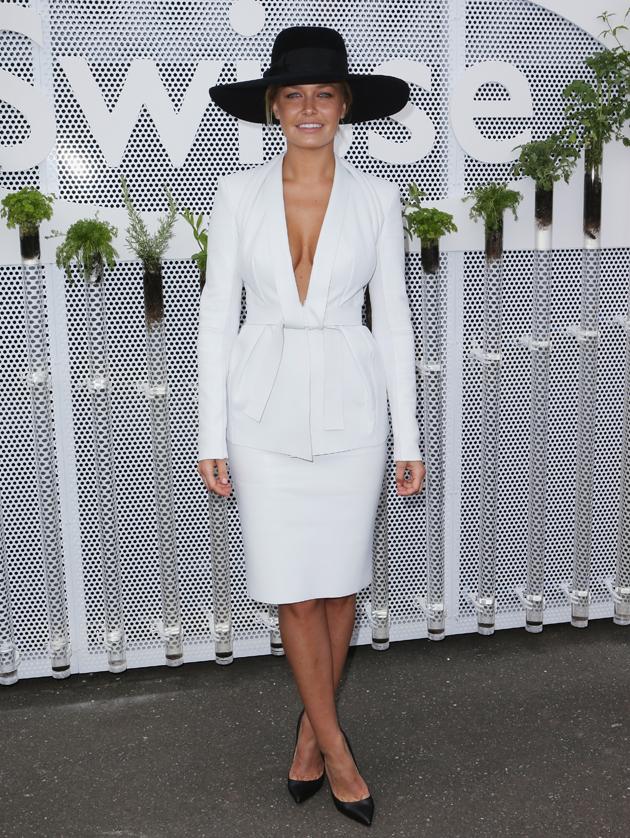 She accessorises with body glitter like it’s going out of style and she looks “incred”, amirite? 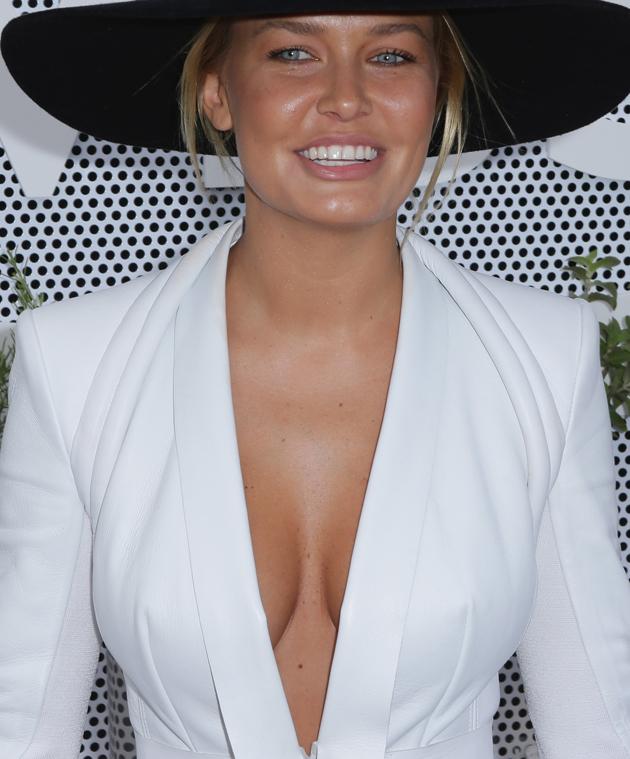 Who is Sharni Vinson and why is she macking on a reluctant Leatherface!? 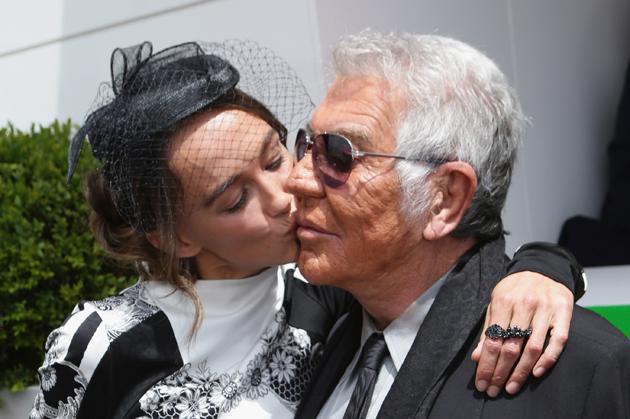 Just kidding. That’s sun-dried-tomato-cum-designer-cum-human-animal-print Roberto Cavalli. Please don’t skin me! To his credit, Cavalli is seventy-something and is international fashion royalty. I just Googled Vinson and she is face mashing with Kellan Lutz so yeeeeeew go Sharni! She wears Roberto Cavalli, I’m pretty sure. I’m also very sure there isn’t espresso in those coffee cups, because nothing says ‘fancy’ like champagne from a paper coffee cup! 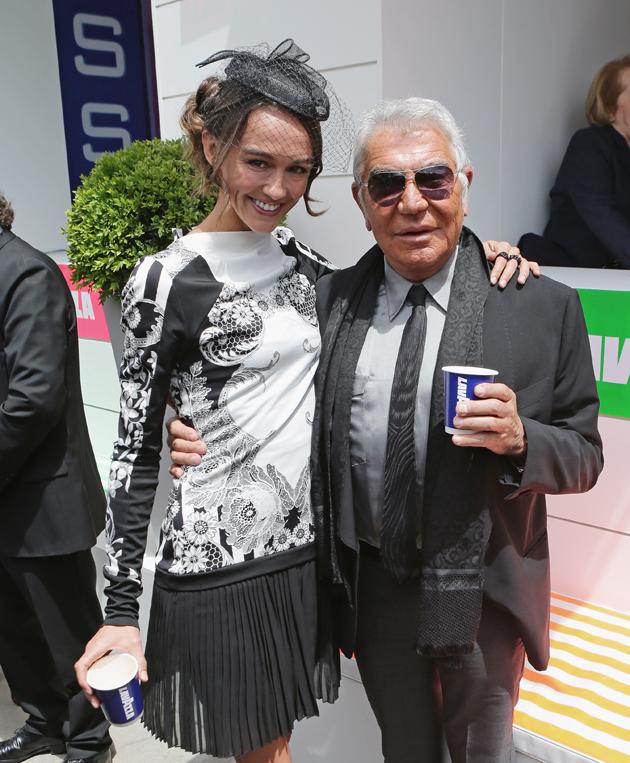 Guys, you can stop looking for Alibrandi because I found her against the photo wall, right next to this obvious joke! The stars are ironic, no? Pia Miranda looks super kewt and you can tell she’d be a good time at the open bar. Looking For Alibrandi is one of the only movies I’ve cried in, so kudos Pia, you are an icon of Australian cinema and my childhood and you look fun. 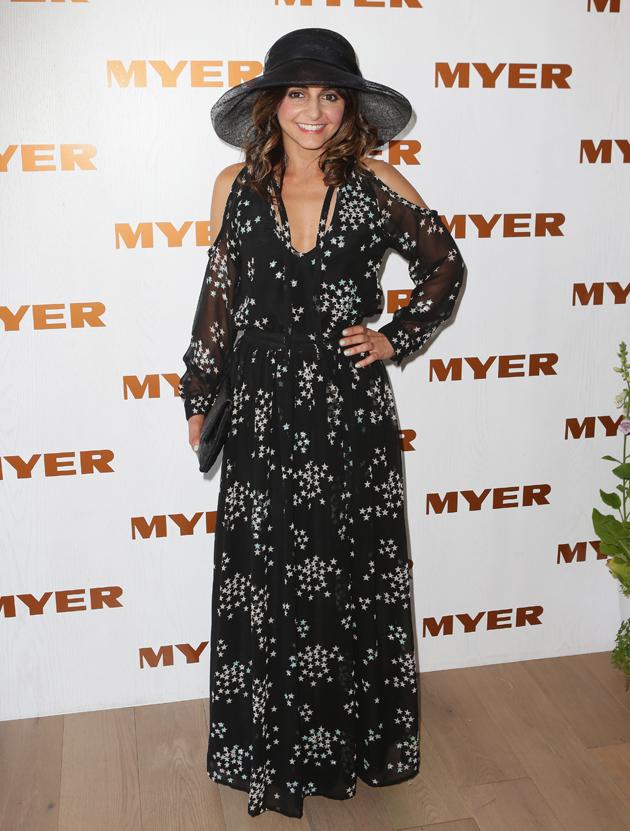 Here’s a template you can borrow for your next red carpet wrap. Circle the correct answer: This is (Brian McFadden/Ronan Keating) a previous boy-band member who is now a judge on (axed/popular) Channel 7 reality talent series (Australia’s Got Talent/The X-Factor). He stands with his (wife/lady friend) the lovely, leggy (Vogue Williams/Storm Uechritz). He made her wear her smallest heels and neglected to shave. 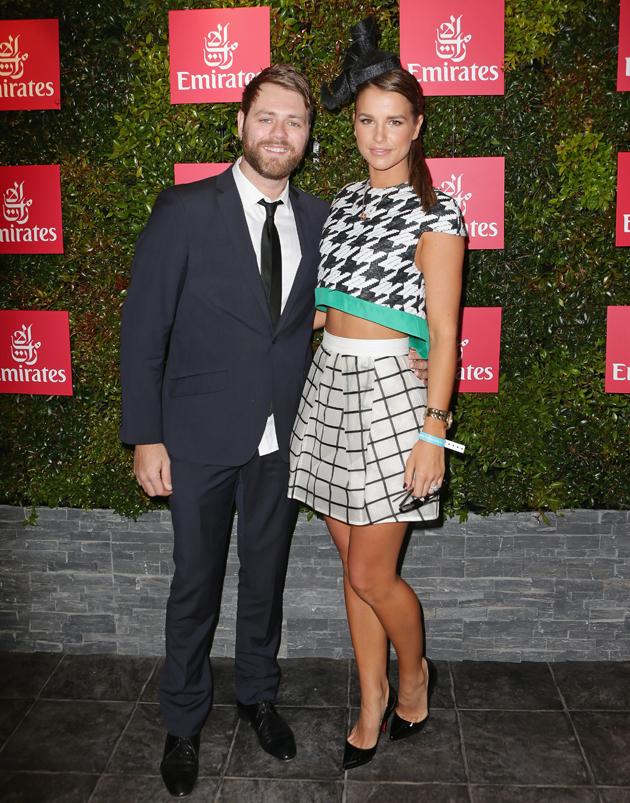 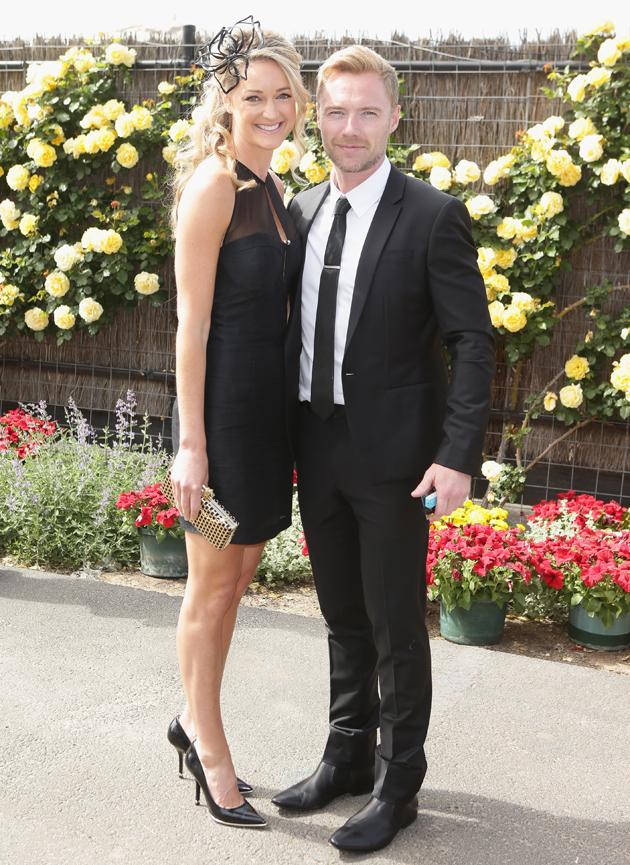 At least Ronan had the decency to tuck his shirt in and not look like a lyric from McFadden’s song about date rape. Ugh. You win this round, Keating. 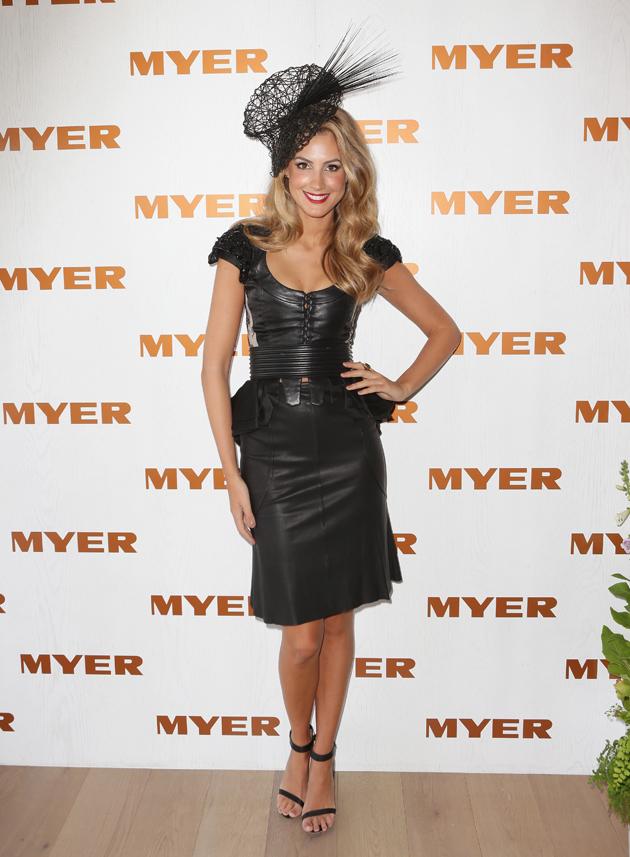 Sarah Murdoch looks excellent, and absolutely terrified at the prospect that some cruel DJ or anyone with an iPod could drop C&C Music Factory at any moment. That’s gotta make you sweat. 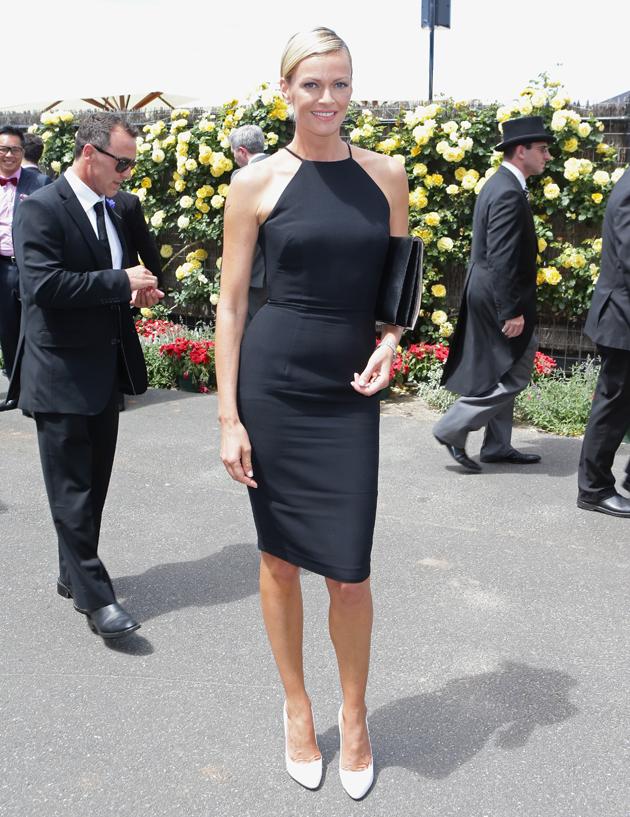 Sworn nemesis of vowels everywhere, Kyly Clrk, looks sweet and lovely, like Peter Rabbit’s missus took up beekeeping because she liked the idea of it at the time but then realised how much hard work was involved so she killed the queen with kindness. 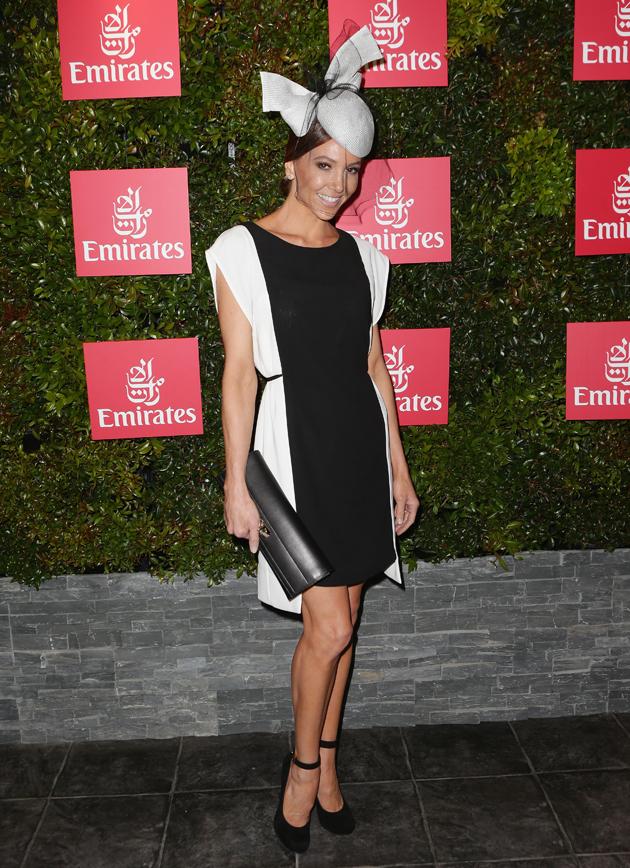 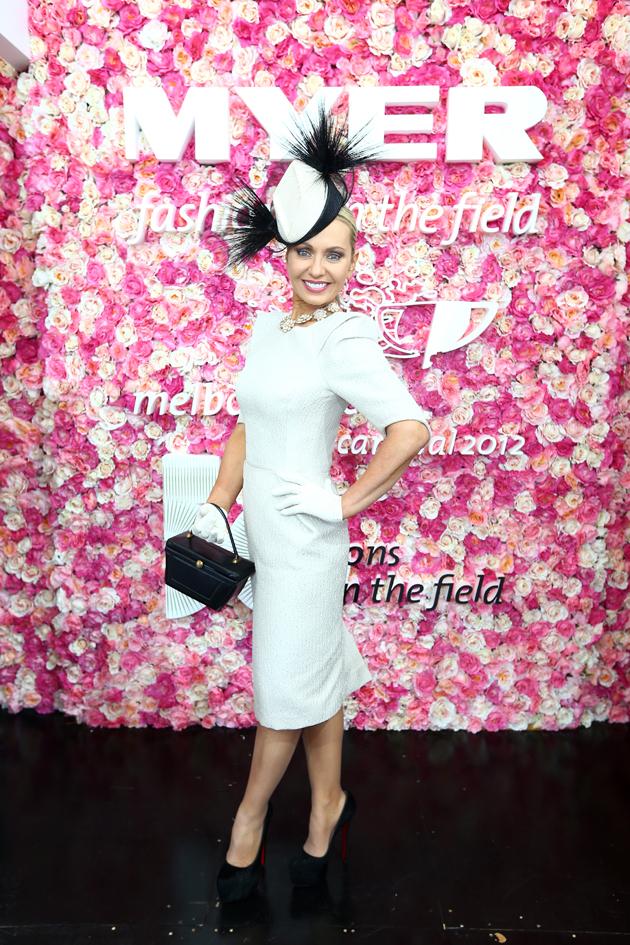 I envy her obviously ridiculous levels of comfort.

Jodi Gordon and Braith Anathsthathatha have been on their honeymoon or something and you can tell they’ve been having all kinds of international sexy times. They look so good I can’t even remember what it is that Jodi did to break the law/the Summer Bay fourth wall. Jodi wears a sculptural neoprene-y confection and has honeymoon sex beads draped in the shape of a ram on her forehead (TBC). Just kidding, Jodes. That’s a nice headpiece. Please don’t kill me, Braith. 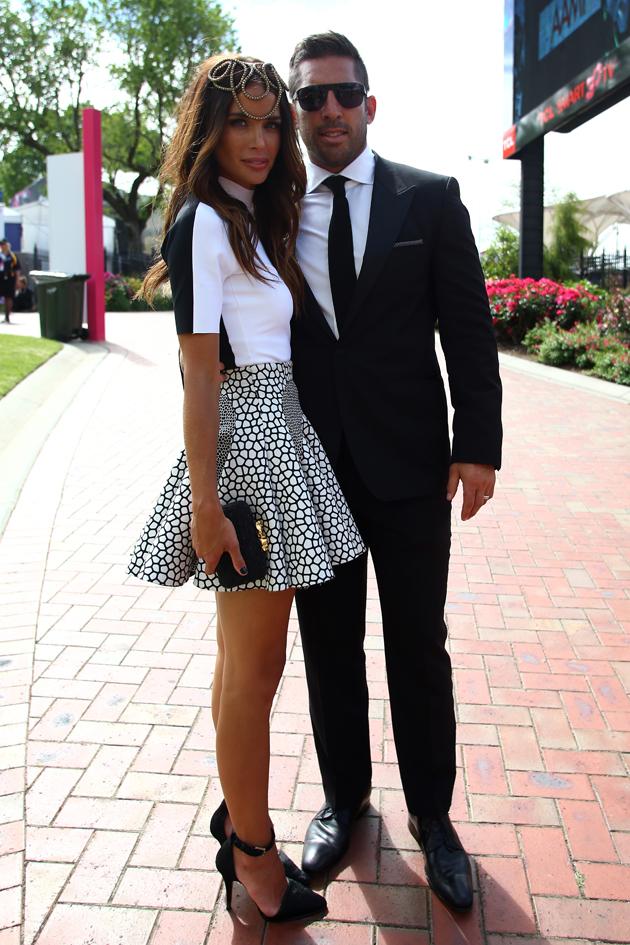 These three dapper gents were the winners of the fashions in the field: dude division stakes. Obviously the guy in the middle is the winner. He went for a Prince of Wales glen plaid suit that has been tailored, cuffed above the ankle, tapered and worn sock-less. Approve. Not sure if a douchebag trilby/fedora trinity was a pre-requisite for entry or if questionable millinery just manifests itself when there’s this much money/douchebaggery in the air. 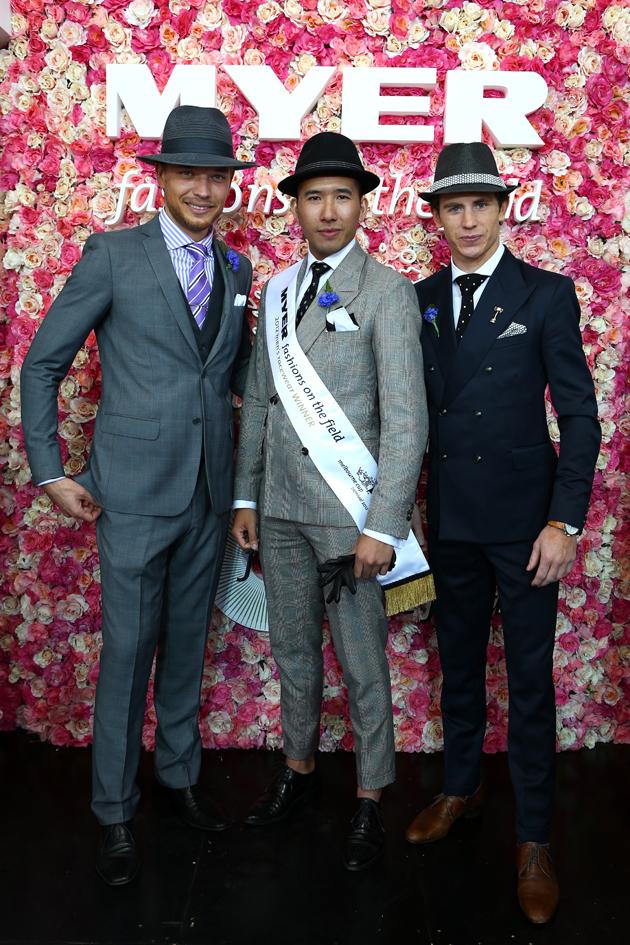 They look like nice young men with respectable 9 to 5s that you could take home to your mother. Ladies, if you want to look them up on Facebook their names are (L to R): David Witko, Peter Tran and Scott Flora, and you just know you’re never going to end up on “Don’t Tell The Bride” with one of these guys.

Aspiring politician Rebecca Judd (sorry, I don’t know what anyone does) falls victim to The Curse of the Grassy Stiletto. I like her leather peplum, the Terminator of trends (it won’t die) and her ability to Buzz Lightyear (fall with style). 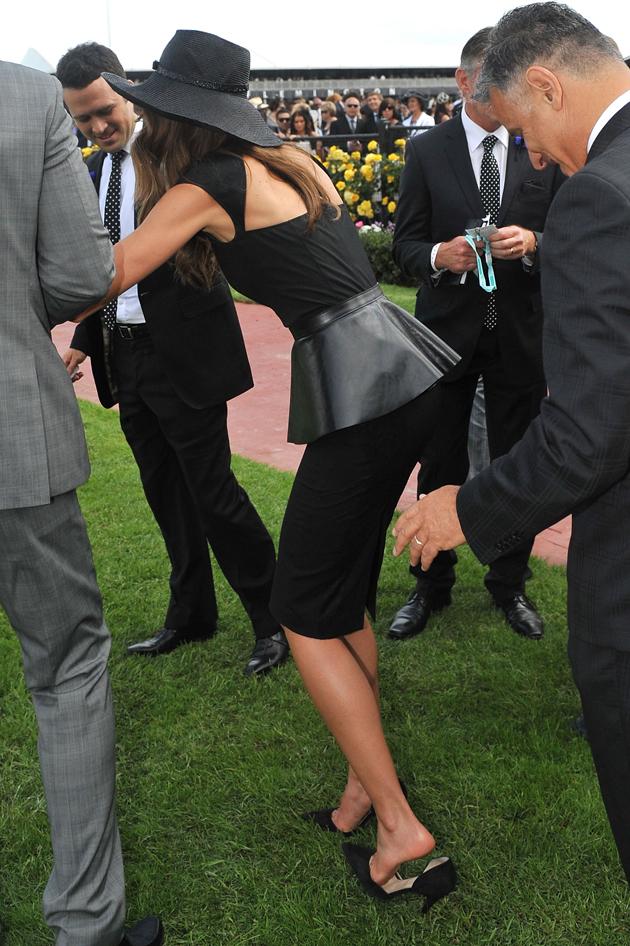 Jessinta Campbell looks so fresh and so clean, clean in a nice v-neck Wimbledon dress, statement gold accessories, a bold red lip, a quirky Burberry-esque bucket hat and shoes ripped straight off the feet of a horse. Nay. 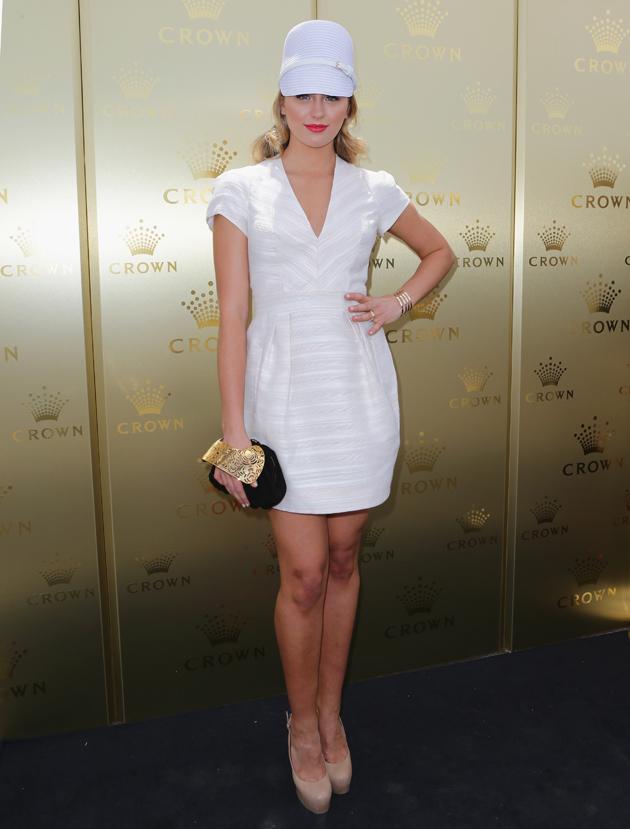 Sophie Monk makes me want to sing beautiful duets while wearing a bed sheet wrapped around my waist. Freaking genius. 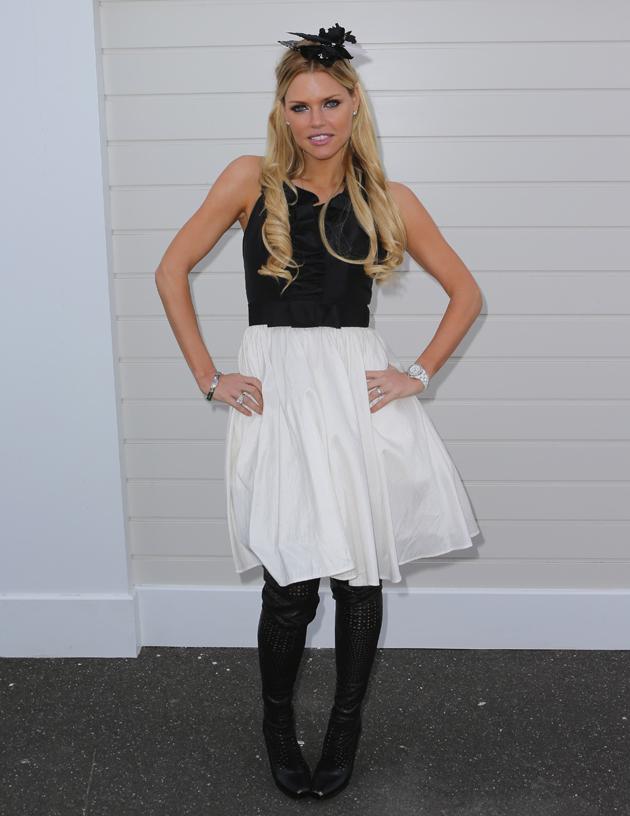 Photos by Scott Barbour via Getty