One person has died and at least three people have been injured in an accident at Dreamworld on Queensland‘s Gold Coast, according to unconfirmed sources.


Exact details of the accident are unknown, but a guest of the park tweeted that it occurred on the BuzzSaw rollercoaster.

UPDATE: It is now looking like the accident occurred on the Thunder River Rapids Ride. Dreamworld are unable to confirm until emergency crews have finished working, but chopper footage from Channel 9 indicates this it the one. 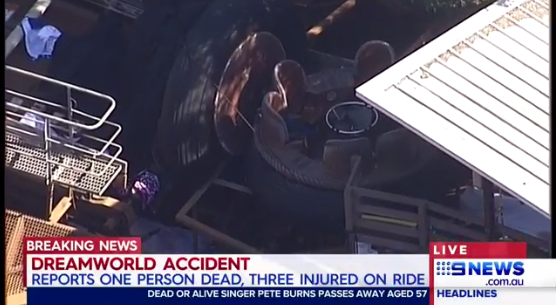 Local reporter Jaydan Duck reports that one person was unconscious and receiving CPR after the accident, while three others were injured.

UPDATE: Exact details of the incident at #Dreamworld remain unclear at this stage. Reports have 1 person seriously hurt – 2 others trapped.

UPDATE: Reports one person is unconscious & receiving CPR after a serious accident at #Dreamworld – three other people have been injured.

Channel 9 is reporting that the person is now deceased, and that a major operation is underway to rescue two people trapped.

DREAMWORLD UPDATE: One person dead and multiple others injured. @michaelbesty with the latest #9News https://t.co/fk62Us6XGU

Emergency crew are on the scene. We’ll continue to update this story as it unfolds.

We are managing a critical incident at #Dreamworld. There is nothing more we can confirm with any certainty at this stage.

UPDATE: Nine New Gold Coast is now reporting that four people are believed to be deceased.

UPDATE: It is believed four people are dead after a horror accident on a water ride at @Dreamworld_AU: https://t.co/aj2nfxWzcT. #9News

Queensland Police have confirmed that four people have been critically injured, but no deaths have yet been confirmed.

Four people have been critically injured at #Dreamworld. There is nothing further we can confirm at this stage.