Produced in association with our mates at Nutri-Grain.

The Hurley Australian Open of Surfing concluded in Manly on the weekend, with Californian Kolohe Andino and Narrabeen’s own Laura Enever emerging from Poseidon‘s domain sporting a trophy and some sort of sporting memorabilia (probably a snapback, why is it always a snapback?). 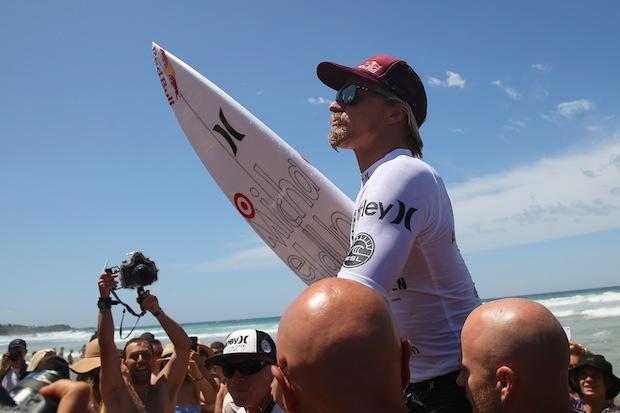 Now that the dust and waves have settled, you can review the surfing action via the Heat Analyser over at the official website HERE.

OR you can allow us to to fulfil your hankering for high-performance surf, and hear what Enever herself had to say about it all, by following our attached guide to the best surfing surfing seen at your Australian Open of Surfing.

You can check out the incredible mini-doc on Derek Rabelo ~HERE~ but, for the uninitiated, he’s basically one of the most inspirational dudes around. Only a short while after deciding he wanted to surf Derek, who was born blind, was surfing Pipe and has since made it out to Aus to take on the Surf Open. Watching him ride, and knowing he’s doing it all from feel and sound alone, is straight up mind-blowing.

Head HERE to see Derek’s in action and keep an eye out for the other UNSTOPPABLE stories presented by Nutri-Grain on equally impressive legends C O M I N G   S O O N.

~VIDEO HERE~  Hard to choose between this and Laura Enever’s round 5 contest with current world champion Stephanie Gilmore. Enever and Wright have been on form all event and are equally matched in the final. Enever manages to hold out Wright to win the event, no easy task given how much of a force Tyler is in women’s surfing right now.

We caught up with Laura post-win:

What’s it like to have such a large scale event like Aus open so close to your home break? Did you have an advantage?

It was so nice getting to sleep in my own bed and be at home while I was competing! I think the main advantage was getting to escape the craziness of the competition and just do my own thing at home with all my friends and family. The week was just really relaxed and chilled!

On your way to victory you took out Steph Gilmore and Tyler Wright, number 1 and 2 in the world respectively. Who will be out for revenge at the Roxy Pro?

Haha! I’m sure they both will be out for revenge ! Steph and Tyler are both awesome they were so happy to see me (finally!) get a win… We all travel together throughout the year, so we are great friends. I love watching them surf and win!

What event are you looking forward to the most this year?

I can’t wait for the waves in Fiji , Trestles, Snapper and Hawaii!

Where are you going to keep the trophy?

I’m sure my mum will find a good place for it! Haha!

Where/who did you party with after victory?

I celebrated at Daniel San in Manly after the contest – there was a lot of dancing! And last night Mexicano restaurant opened up on there night off and threw me an amazing dinner party with all my friends and family.

What’s it like to surf manly without a crowd? (

)
Surfing anywhere without a crowd is always awesome! I couldn’t believe the crowd on the beach though! It was crazy! It was so awesome to see everyone down there!

Who’s your favourite colleague to watch?

Steph Gilmore for sure … In and out of the water she’s so stylish and graceful.

Are there any surfers from back in the day who particularly made you want to get into surfing?

I was such a tom boy when I started surfing as a 10 year old. I looked up to all the local guys at North Narrabeen who have been pushing and supporting me since day one. It was awesome to have them cheering me on this week! 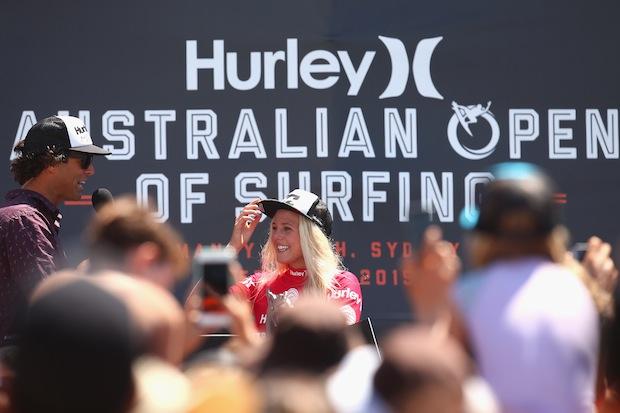 ~VIDEO HERE~  This is the heat in which you will see the best turn of the entire event. Hawaiian Tatiana Weston Webb nails a backhand-turn-to-ridiculous-drop-from-the-heavens for a 7.17 from the judges. Tatiana made a few guest appearances on the CT last year where she definitely had an impact, looking forward to watching her in a full-time-day-job-type capacity in 2015.

~VIDEO HERE~  A strong showing from Ryan Callinan upsets World Tour Veteran and Pipe Master Bede Durbridge. Callinan’s surfing is on point, with solid scores dropping for both his aerial portfolio and strong face game. Behold his 8.67 and sigh in awestruck wonder, how did he land it? I, for one, do not know.

~VIDEO HERE~  Mateia Hiquily’s semi final is the best opportunity to see the young Tahitian in full on slay mode. It was always going to take a lot to stop the charging Ryan Callinan, who put in another impressive display of high performance surfing. Hiquily *explodes* in this heat, managing to put together 17.63 heat, one of the highest totals of the event.

Snapbacks to all, and to all a snapback.

Images via Getty by Cameron Spencer.