Ronald knows how to get me going. I rapidly alternate between Cheeseburgers, McNuggies and Big Macs, sometimes even eating a little bit of each, all at once.

But that’s pretty much where my interest in combining unholy meats ends.

I was busy minding my own business, innocently scrolling my feed, when a message popped up from Nigel* (*name has been changed to preserve privacy/enhance creepiness of said individual).

To make matters worse, Nigel isn’t really a friend of mine at all. Rather, he’s the husband of the older sister of a friend of mine from uni (The clunkiness of that sentence is a good indicator of how far removed he is from my life).

I share this today for greater good of mankind, and as a PSA of sorts for those of you game / shit enough to proposition your wife’s little sister’s mates for hot sexxx on the web. His messages are in the black, mine in the green – I’m keeping my identity anon too, because I’d hate to preclude myself from future prospective threesomes.

Anyhow. Here’s how not to ask a stranger to be involved in your ménage à trois on Facebook.

1. Change the colour of the chat to a *sexy purple* and ask incessantly about my Snapchat 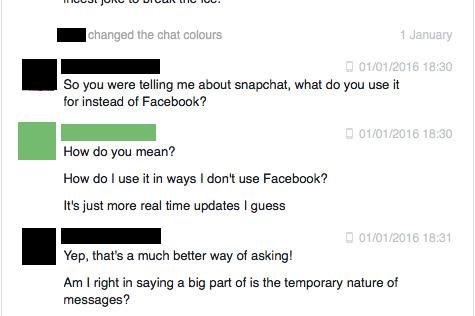 A few years ago, Snapchat was home to the humble nudes. Perhaps it still is, but personally, I use mine to document my brunch. Nigel had asked me about Snapchat a few times before this… At first, thinly veiling his interest by saying he wanted to “adapt it for his business”. Grim.

And this, folks, was when I knew. The exclamation mark was the tipping point. 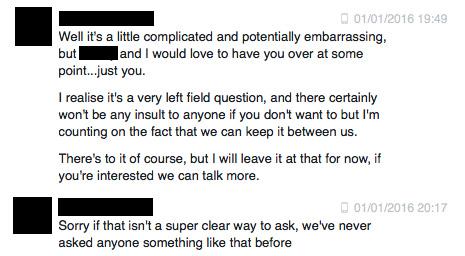 For Christ’s sake. If you’re going to invite me to a private party in your pants, at least give it some chutzpah. You’ve already made it awkward and I haven’t even been lovingly sandwiched between your hairy crack and your wife’s hoo-hee.

3. Use the ‘informative infomercial’ tone

Nothing makes me feel like a well-waxed used car quite like being condensed into three key features. At least he was polite enough to open the floor to any questions. Nigel’s got some pretty neat reasoning for a cold call pitch.

Don’t get me wrong – threesomes can be great; all the power to those interested. But for dog’s sake, 3nder exists for a reason. So does Trippple.