Are They Innocently Shit At Replying Or Just A Shit Person? An Inquiry

Replying is a funny thing. Some of us are exemplary at it, others not so exemplary.

When it comes to dating, there’s a common trope that shit repliers are shit people and, hey, that may be true in some instances, but what about those grey areas? Like, what if they’re a shit replier but actually a not-shit person? How can we tell the difference? Additionally, how do we know if they’re keen, or more interested in Spooky McGhosting our fine asses? Shit.

At this point, I would like to address the elephant in the room and disclose that I, myself, unfortunately do not exhibit the crème de la crème of texting etiquette in my day-to-day life.

Put simply, I’m a shit replier and not in any position to judge others’ messaging abilities (but will continue to do so anyway) (hehE). Let my close friends elaborate on my admirable speed at replying.

“I am more likely to win the lottery than receive a reply from you within 24 hours,” Oscar told me.

“A child could be conceived and born before you so much as glance at our messages,” said Jack.

Despite this, I like to think that I’m not a shit person (jury’s still out on that one, though). It’s all very ironic considering that I’m employed to write but, hey, only God and Hilary Duff can judge me. Alas, I digress…

My messaging abilities greatly differ when it comes to the dating realm, though – I’m a lot more attentive on the ol’ cellular device when it comes to someone that I’m romantically interested in. I feel like it’s because I want to impress them to some degree, subsequently cat-fishing them into thinking that I have my life together in some capacity and am able to reply in a timely manner.

Now, it’s all well and good when you’re the one doing a shit reply, but when you’re on the receiving end of a lacklustre, boner-killing response, it can be difficult to differentiate whether they’re not interested or just legitimately bad in the messaging game.

In most instances, a shit reply/message can arguably mean one of two things:
1. They’re genuinely keen and just a fucking shit replier.
2. They’re not keen and we can cry now.

READ MORE
Who Is More Dangerous: The Softboi Or The Fuccboi?

Take Josie, for example, who admits that her now-long-term partner was pretty iffy on the texting front when they first started dating.

“[He] was the WORST TEXTER in history.”

I asked Josie how she managed to persevere through the initial dating stages, because I feel like I, myself, would have just assumed he wasn’t interested and given up. (Maybe this is why I’m still single. Alas, I digress again…)

“When I was actually with him he was very attentive and fun to be around,” she notes.

“At the time I had a mild go at him about it and he explained that he just doesn’t like writing and finds it difficult to get his point across.”

It wasn’t until she saw him putting off a text to a friend that she believed him. “I actually witnessed him pick up his phone to text a mate, make 3 attempts to fashion a sentence, and then give up… He hates writing. So I realised it wasn’t just me.”

Some people just hate messaging and, to be honest, fair enough. But when they don’t reply to your messages, or give a fart of a response to your life thesis, it’s a natural human reaction to assume that it’s an attack on you.

But, hey, maybe it is. Let me now explain option 2 in a cute diagram… 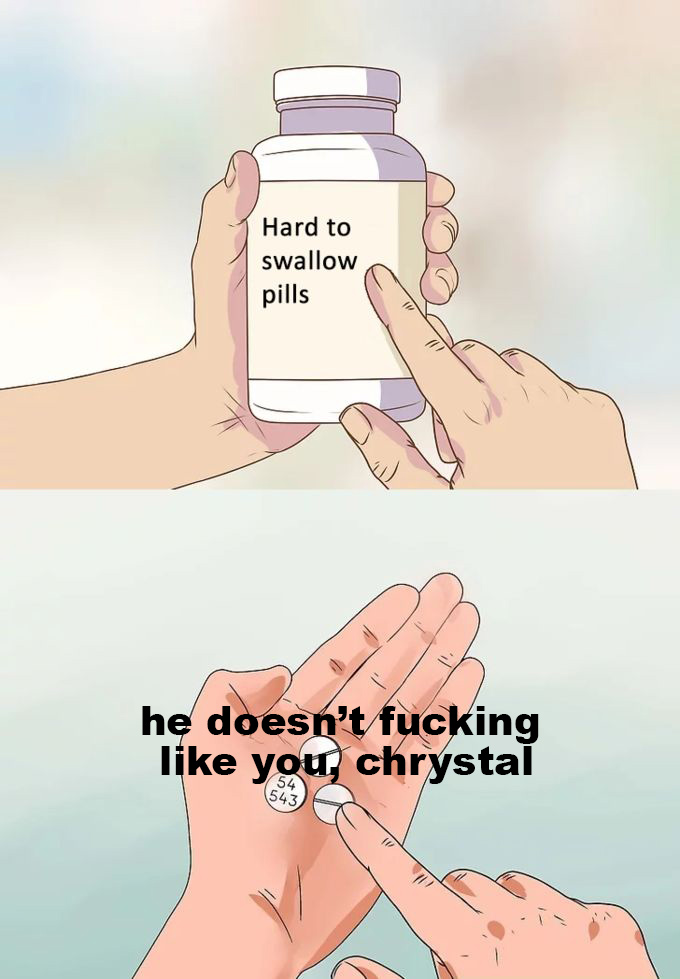 We’ve all been Chrystal. Chrystal lives in all of us. Bless up, Chrystal.

Realising that perhaps they’re just not that into you can be a painful lesson. This rings particularly true for many of us people-pleasing humans, as it’s in our nature to like someone more if they’re less interested.

It’s almost like we want to prove them wrong. “You may not like me right now, but you’ll eventually love me… JUST YOU WAIT!” Except you wait. And wait… singing “Someone Like You” into a tub of gluten-free ice-cream while he’s already slid into the DMs of 17 other people.

Move on to someone who’s attentive. I’m not saying we should date people who’ll respond to our messages faster than those old bots on MSN, because that’d be weird and, TBH, a low-key turn-off. Rather, we should be focusing our energy on those who’ll give us the time and attention we deserve, and won’t make us feel like our sole presences are burdens. (This is some empowering shit, right here… Alexa, play “Truth Hurts” by Lizzo.)

I mean, at the end of the day, if they’re the right match and there’s a genuine connection, you won’t even have to think twice about what and when to message, right? Conversation will just naturally flow.

Yes, this entire article could have been summarised with the two sentences above, but I love a hefty dating yarn with y’all. Thank the High Heavens™ this wasn’t over messenger, though – I probably wouldn’t have replied, in that case.

I’m working on it. Apologies.