When Celebrities Getting Cancelled Becomes A Meme

James Charles – teenage makeup vlogger, digital celebrity, and the first male face of Covergirl – is facing a career crisis. Millions of followers have flocked to unfollow the 19-year-old following a weekend of controversy and messy YouTube drama. But the way the beauty blogger’s cancellation has itself become a meme represents something increasingly common in the digital age, particularly as the still-new career paths of “influencer” and “YouTuber” are establishing their patch.

It is not just that Charles needs to apologise, reconcile and rebrand. He has to try and reverse a wave of bad publicity which comes in the form of ‘cancellation’.

On Saturday, Charles’ former mentor Tati Westbrook posted a 40 minute video on YouTube publicly ending her association with him.

Westbrook cited Charles’ endorsement of a vitamin company that is a direct competitor to her own brand, Halo Beauty. She said she was tired of defending him, particularly after he allegedly tried to “trick a straight man into thinking he’s gay, yet again.”

In the 24 hours following Westbrook’s video, Charles lost over one million subscribers. He is the first YouTuber to achieve that dubious honour in the platform’s history.

There was and continues to be an unfolding drama from the heights of the thin line between the influencer and celebrity community. Miley Cyrus unfollowed him! Jeffree Starr, himself no stranger to controversy, says the teenager got everything he deserved! Charles’ brother, Ian, is pondering out loud about the psychology around chest-puffing on the internet! Everyone, it seems, has a James Charles story.

Perhaps the most damning reaction Charles faces (other than the 3 million odd followers he has already lost) is the ways in which his audience – young, consumerist, and internet-literate – have reacted.

On Tik Tok, the short-form video app rapidly taking the place of Vine, teens film themselves painting over Charles’ products and removing his branding and labelling. There are clips of young girls dancing enthusiastically to Charles’ 8-minute apology video (this one, on Twitter, is particularly good). There are videos of  people hurling makeup palettes down staircases, throwing out Charles’ branded clothing, and flinging boxes with his face on them into fires. 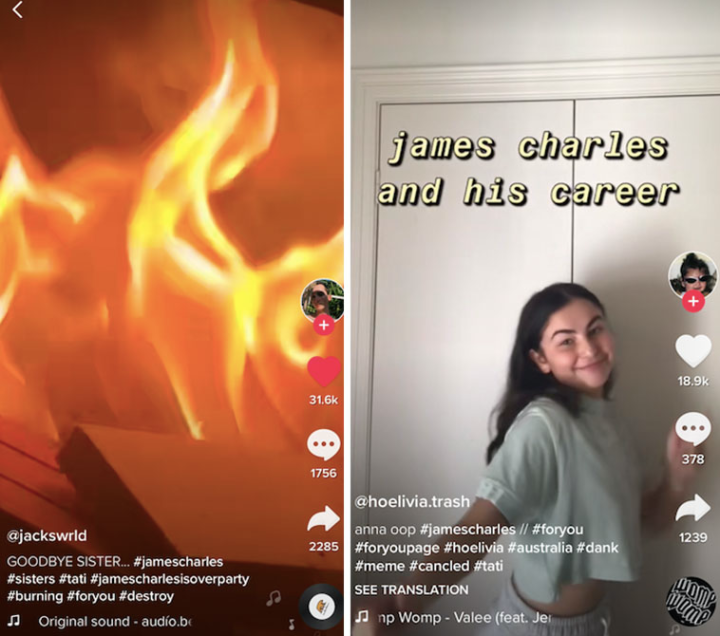 To add further pain, most of these videos are set to the soundtrack of Charles crooning on a cover of “Never Enough” – a song he uploaded to his YouTube literally a week ago. His cancellation has become churn for more content; a meme itself.

This has happened before. The very concept of being cancelled, referring to the decision from fans to withdraw support from a celebrity for misconduct or questionable behaviour, is a meme. “You’re cancelled” is now inexorably part of the public discourse – it’s a wonder why dictionaries haven’t already added a new definition below the obvious.

But what happens when cancellation the meme becomes memed? It is one thing for former fans to retract their support and swear off you forever; it is another thing entirely for people to actually learn of your existence through the fact you have been “cancelled”. It’s not just people swearing off of you forever, or refusing to buy your products. Now there are people who don’t care who you are, won’t buy what you sell, and couldn’t care less what your status is in culture, contributing to your demise by engaging with it as content. How do you even start to combat that?

Since 2016, the 29-year-old pop sensation has been plagued by the snake. As both a word and its equivalent emoji, the serpent has filled Swift’s social media accounts, filled up forums, and was the go-to gotcha for a digital fandom that grew tired of Swift’s manicured image.

No figure is more responsible for this than Kim Kardashian. In 2016, she posted a video on Snapchat of her husband, rapper Kanye West, appearing to ask Swift on the phone if he could use the line “I feel like me and Taylor might still have sex / I made that bitch famous” in a song. The video blew up, mostly because Swift’s reps had previously denounced the song, saying the singer had cautioned West about releasing it.

All of this happened on July 17, the Day of the Snake, something Kardashian took great pleasure in pointing out to her tens of millions of followers.

The movement from there was rapid. The snake emoji became a constant on Swift’s social media and the same went for any commentary or picture of the singer. It was a meme as much as it was an attack on her character. It was easy to post an emoji of a snake, to flock Twitter with hisses and demands for cancellation. Anyone could do it.

An active campaign to cancel Swift, to end her popularity, and to see her thrown into the trash of pop music and discarded en masse, began. And then it disappeared. Instagram CEO Kevin Systrom developed a filter allowing celebrities to delete certain words and emojis from their feeds. Just like that, the snakes were gone – but the association continued. Try as she might to physically remove the snake from her image it was brought up and brought up and brought up again.

Swift was finally able to get some control of the situation by washing her social accounts blank. Then she posted a gif of a snake. Then she appeared at the American Music Awards to sing in front of gigantic, 20-foot sculpture of a serpent. She had given up fighting the image. The huge snakes became a part of her world tour, Swift naming them and speaking about them in the media.

The snake meme originally started to cancel her was repurposed and repackaged until finally, this year, Swift’s debut music video featured a snake erupting into a swarm of butterflies. It’s part of her brand now.

In the YouTube world, the controversial and constantly in-the-news star Logan Paul has been cancelled more than anyone. #LoganPaulIsOver trended worldwide after Paul, in early 2018, went on a huge apology tour as a result of uploading a video from Japan’s “suicide forest”.

Paul’s video saw him receive widespread condemnation, but also led to the 24-year-old appearing in news segments and on breakfast TV, receiving more eyeballs and more attention than ever before. In trying to halt Paul’s continued rise to fame, his digital audience had just pushed him into the mainstream.

At the start of 2019, perhaps realising the strength in harnessing cancellation as a meme, Paul again sparked controversy for saying he was “going gay for one month.” Paul apologised, said his words could have been used better, and offered to have members of GLAAD on his podcast to get a formal apology. The video of a discussion about the incident with LGBTQ activist Josh Seefried has over a half a million views.

James Charles has a history of apologising, too. In 2017, he apologised to fans for a “joke” he made on Twitter about the Ebola virus. Then it was revealed that the famous high school graduation picture that had catapulted him to stardom was falsified. He has been called transphobic for comments made about not being “fully gay”, referencing the Kinsey scale. He apologised then, admitting his comments had been unintentionally transphobic. No doubt he has lost some fans through all of this, but none of it has been at the scale of the last week.

It remains to be seen if Charles can even come close to retrieving what he had – but in the face of a wave of memes and calls for cancellation, there are only two options: embrace it or don’t.